1. In accordance with the faith of our Church, we teach you and tell you that Christ will appear to us twice, not only once, and that His second coming will be incomparably more brilliant and glorious than the first. Because in the first, Christ’s patience was manifested in all its depth, whereas in the second the whole of the power and glory of His Kingdom will be revealed. 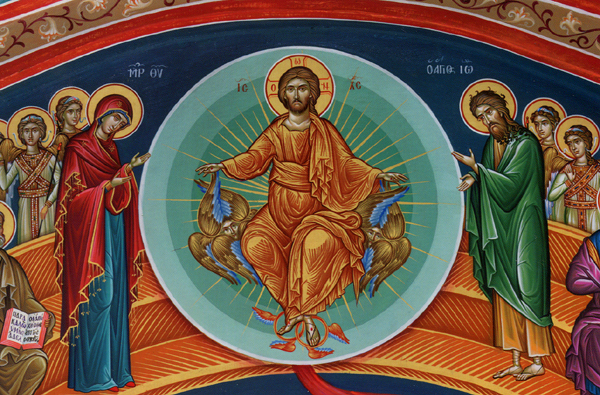 The Saviour comes not to be judged again, but to judge those who condemned Him. He Who, at His first coming, was silent when He was being tried, said prophetically and revealingly to the Jewish law-breakers, who committed these shocking acts at the time of the Crucifixion: ‘This have you done, my people, and I have not spoken’ (Ps. 49, 21). At His first coming, His aim was to provide for our salvation and so He taught with convincing words. At His second coming, though, whether they want to or not, people will be forced to accept that He is the only ‘King of kings and Lord of lords’ [I Tim. 6,15].

3. So our Lord Jesus Christ will come from heaven. He’ll come with glory, when this world is about to end, in the last days. Because this world will, indeed, end and there’ll be a renewal of the created world. Because ‘there is swearing, lying, murder, stealing, and committing adultery; they break all bounds, and bloodshed follows bloodshed’ (Hosea 4, 2), and to prevent this wonderful dwelling-place of the human race from continuing to be filled with transgressions, this world will pass away, so that a more perfect one may appear…

4. All the things we see now will pass away so that something more perfect can replace them. But let no-one delve too deeply into when that might be. The Lord told us: ‘It is not for you to know times or seasons that the Father has fixed by his own authority (Acts.1, 7). So let no one either dare to determine the time when this will happen, nor sleep peacefully [1]. Because it says: ‘Therefore you also must be ready, for the Son of Man will come at an hour you do not expect’ (Matth. 24, 44).

But we do need to recognize the signs of the end of the world, since we’re expecting Christ’s second coming and we mustn’t die deceived or fall into the delusion of the Antichrist. So the Apostles, ‘by dispensation’, were moved by a God-given impulse and asked the true Teacher: ‘Tell us when this will happen, and what the sign will be of your coming and of the end of the age (Matth. 24, 3). We’re waiting for you to come, but even Satan disguises himself as an angel of light (II Cor. 11, 14). Protect us, then, so that we don’t worship someone other than you’.

And He replied: ‘See to it that no one misleads you’ (Matth. 24, 4). And you who are here now, with the eyes of your soul, as if He were here before you, listen to Him telling you the same thing: ‘See to it that no one misleads you’. The Word entreats all of you to pay attention to what He’s said. Because this isn’t the story of things which have happened, but a prophecy of the future which will surely come to pass. We don’t prophesy it- we’re not worthy to do so- but we bring forward what’s been written and we refer to the relevant, characteristic ‘signs’. So look for yourselves, see what’s already happened, what is still to happen and protect yourselves [2].

[1] Saint Cyril’s position is of enduring importance and value and should be taken into account seriously by all those who, in our own day, are moved and excessively exercised by the issue of the coming of the Antichrist.
[2] Saint Cyril isn’t suggesting that the matter is entirely subjective. He believes that it’s possible for a sober and discerning mind to fashion a proper approach to the issue, on its own responsibility, and then to trust in God and the Church as regards the rest.