From heaven Gabriel cries Hail to the Virgin

‘From heaven Gabriel cries Hail to the Virgin’ [1].

Today’s feast is the beginning of all the feasts which are concerned with the person of Jesus. In Greek, the name of the feast is Evangelismos meaning, literally ‘good tidings’. What is this good news? The message announced [hence ‘Annunciation’] by the Archangel Gabriel to Mary, the Mother of God that she would give birth to the Son of God. Today we celebrate the union of God and humankind in a single person. Today we all become Sons of God and brothers and sisters of Christ. In the womb of the Mother of God, God became wedded to human nature. ‘A mystery is recognized by faith, it is not investigated by officious curiosity. A mystery is venerated… it is confessed, not measured’ [2]. The human mind cannot understand how God became human.

Mary was a virgin in both body and soul. She had all the sensations of the body, but without any pollution. It had been written of her that she was the closed gate through which no-one would pass except the Lord’s anointed: ‘The Lord said to me, “This gate is to remain shut. It must not be opened; no one may enter through it. It is to remain shut because the Lord, the God of Israel, has entered through it”’. The Mother of God is Our Lady because she rules over all, since she is herself free and is also the root of the freedom of the human race. This is why, when the angel appeared to her, he addressed her thus: ‘Hail, you who are full of grace. The Lord is with you. Blessed are you among women’.

The first joyful message that was heard on earth was that God would become human and would live with us: ‘And the word became flesh and dwelt among us’ [4]. The angel greets Our Lady, and the whole of the human race is plighted to freedom and joy. Through the Mother of God, the whole of the human race tastes the sweet fruits of joy. This joy is none other than the Son of God himself. At first Our Lady was at a loss to understand how this was to happen, given that she hadn’t known a man. The archangel then explained that the Holy Spirit would visit her [5] and, by the power of the Most High the incarnation of the Son and Word would be accomplished. The Mother of God at once obeyed the will of God, saying: ‘Behold the handmaiden of the Lord; may it be unto me according to your word’ [6].

By sending the Archangel to the Virgin, God made her the mother of Christ merely through the annunciation we heard today. Had the conception of Christ occurred through human intervention, he would not have been the new person. But now he came and was incarnate by the Holy Spirit in the womb of the Virgin, remaining unchanged God and perfect human, as Saint Gregory Palamas puts it [8].

The conception of the Lord in Mary’s womb came about through the Holy Spirit and was without pleasure, without effort and without pain. She effortlessly held him in her womb for nine months, even though the embryo developed in a normal manner. This is the point at which the prophecy of Isaiah was fulfilled: ‘Behold, the Lord sits on a weightless cloud [9]. ‘Weightless cloud’ here means the human flesh during the course of Mary’s pregnancy. 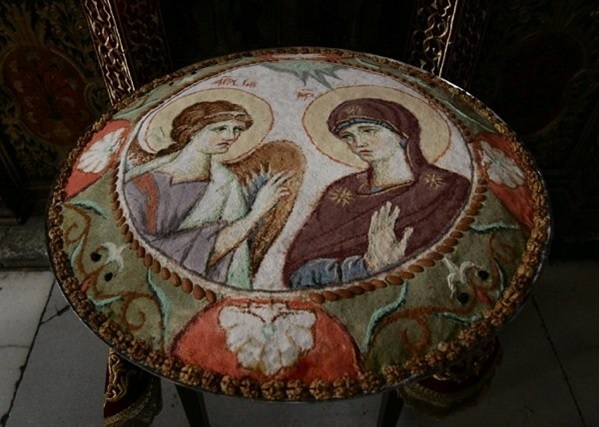 He bent down the heavens and descended, became incarnate, the perfect human being. He took on the whole of our human nature, apart from sin, and united the human and divine in his person. He came into the world not only to save us but to glorify us. According to Saint Athanasios the Great, ‘for he became human in order to deify us’ [10]. God became human so that we could become God by grace.

The Annunciation of the Mother of God is the annunciation of the whole of the human race. The Son of God became human in order to deify us. If we are to understand the message of today’s feast we must be bound to the Church, to Christ. The Church is the Mother of God who always has the Son of God within her and he is able, at any time to reshape any one of us. The coming of the Lord is the prelude to our own salvation. Together with the hymnographer we sing: ‘Today is the crown of our salvation…’ [11]. Today our nobility regains the luster of its first brilliance. And we use the word ‘today’ because the Church works on liturgical time. The future is experienced as the present. So it is that today we can sing with one heart and mouth: ‘Hail unwedded maiden who have not known marriage… now I announce to you the good tidings of joy. Most Pure Lady, you will remain inviolate and bear the Lord’.

[1] Sessional hymn Mattins: ‘From heaven Gabriel cried to the Virgin: ‘Hail, for in your womb you will conceive the pre-eternal God, who by his word has established the ends of the earth’. At this Mary answered ‘I have not known a man, so how can I bear a son? Who has ever seen a birth without seed?’ Disclosing God’s purpose, the angel said to the Mother of God and Virgin: ‘The Holy Spirit shall come upon you and the power of the Most High will overshadow you’.

[3] Ezekiel 44, 2. Ezekiel’s vision of the closed gate to the east is considered to be a prefiguration of the virgin’s womb, through which only the Messiah will pass. But the gate will remain forever closed, as if it had never been opened. The association of this description with the ever-virginity of Mary, the Mother of God is clear.

[7] Saint John Chrysostom, Discourse on the Annunciation of the Mother of God.

[8] Saint Gregory Palamas, Homily on the Annunciation of Our Most Pure Lady the Mother of God and Ever-Virgin Mary, Homily 14.

[11] Dismissal Hymn of the feast: ‘Today is the crown of our salvation and the manifestation of the mystery that is from all eternity. The Son of God becomes the Son of the Virgin and Gabriel announces the tidings of grace. Therefore let us also join him and cry aloud to the Mother of God: ‘Hail, you who are full of grace; the Lord is with you’.

[12] Doxastiko at the Lity: ‘Gabriel today announces the good tidings to her who is full of grace. ‘Hail unwedded maiden who have not known marriage. Do not be struck with dismay by my strange form and do not be afraid. I am an archangel. Once, the serpent beguiled Eve but now I announce to you the good tidings of joy. Most Pure Lady, you will remain inviolate and bear the Lord’.