The Boundaries between Orthodoxy and Heresy – Saint Gregory Palamas (1)

On the first Sunday of the Fast of Great Lent, the Church celebrates the triumph of Orthodoxy over the heresies. The specific historical event which was the basis and starting-point for this celebration was the victory of the Church against the iconoclasts. The latter proclaimed that the use of icons is anti-Christian. They would not accept the veneration of the icon of Christ, nor the honor paid to the other icons or to the relics of saints. This attitude of theirs was not superficial, but came from a more profound denial of the depiction of Christ, which, in the end, led to a denial of his incarnation and his presence in the world as a real human being. The way the conflict over the icons ended shows its heretical nature. It really was a true heresy. 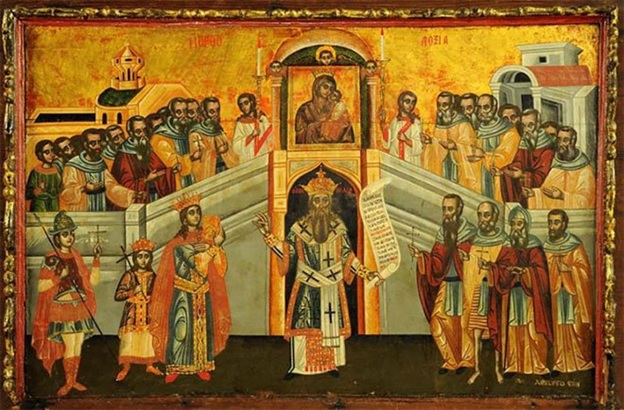 A heresy is not an erroneous theological opinion. Nor is it a misinterpretation of certain points in Holy Scripture or in the Tradition of the Church. As the etymology indicates it is choosing a particular part of theological truth and making it absolute [‘heresy’ comes from the Greek word ‘to lift’ or, by extension ‘to select’]. In other words, heresy, slices the truth into pieces. It chooses a certain part of it, makes it absolute and in this way distorts and affronts the whole truth. When Arius, for example, taught that Christ was a perfect human being, he was not lying. He was telling the truth. But he was not telling the whole truth, only part of it. He omitted to say that Christ was also perfect God. In this way he distorted and affronted the whole of the truth about Christ. He did not acknowledge the union between the divine and human nature in the person of Christ, which is the foundation of our union with God, that is of our salvation and glorification. He challenged the foundations of Christianity and produced a heresy.

So the essence of heresy, as far as Christianity is concerned, is to be found precisely in any challenge to the union between God and humankind, a union which is founded upon the person of Christ as both God and human. In other words, heresy challenges our potential for salvation, which is to say our glorification.

Our glorification or deification is the purpose of our creation. We were created in the ‘image and likeness’ of God. We are God’s creatures and are called upon to be like Him: to be gods. Not, of course, in essence, but by grace as theological language puts it. But this became impossible after our rebellion against God and our subjection to sin. Returning to the ‘likeness’ is our glorification, our salvation.

The whole of the sacred history of the Old Testament, which culminates in the incarnation of God in Christ, reveals the working of divine providence for the salvation of the world. And the Church is the spiritual milieu in which our salvation is initiated.

As challenges to this salvation, heresies presented themselves in the history of the Church on two levels: on the level of the salvation offered to us by God, as was the case with Docetism, Arianism, Nestorianism, Monophytism and so on; and b) on the level of the way we as people receive and understand this salvation, as in Barlaamism, which the Church opposed, mainly through Saint Gregory Palamas.

The ancient heresies attacked salvation on the first level, that is on the very offer of salvation from God to humankind. If Christ was not a real human being, that is if he did not have a real human body but simply the appearance of one, as claimed by the most ancient heretics, the Docetists, who were opposed by Saint John the Evangelist; or if he was only human, as the Arians later claimed; or only God as the Monophysites taught; or if he was both God and human, but with two separate natures which were not united in a single person, as the Nestorians claimed; or even if he was perfect God but not perfect human as the Apolinarists declared, then the whole task of our salvation would not have been completed in full.

As the Scriptures and the Fathers of the Church teach, we are saved when we are received into God, when we are reconnected and united with the source of our life. All the ancient heresies deny, partially or completely, this faith and teaching of the Church. And in this way they challenged the experience which its members had had from the beginning: that communion with Christ, partaking of his body and blood is actually communion with God, participation in divine life.

Iconoclasm was a kind of summary and recapitulation of the ancient heresies. The period of iconoclasm lasted more than a century (726-843) and this time saw a return of a variant of many of the previous heresies. This is why, at the feast of Orthodoxy, there is mention of the condemnation of all the heresies and a proclamation of the unshakeable faith of the Church over the course of its unbroken tradition: ‘As the Prophets saw, as the Apostles taught, as the Church has received, as the Church has received, as the Teachers express in dogma, as the inhabited world understands… so we think, so we speak, so we preach (Syndikon 7th Ecumenical Synod).