The iconostas of the faith

Today is the Sunday of Orthodoxy, and, during the procession with the holy icons, we commemorate those who affirmed the Orthodox faith not only through their teachings but also through their struggles unto death. The Church is therefore justified in choosing for the Epistle reading a passage from chapter eleven of Hebrews, a chapter which has been rightly called ‘the iconostas of the faith’.

The dominant place on this iconostas is occupied by the Prophet Moses. The cost of his faith for the saint was enormous, since he refused- Saint John Chrysostom says ‘hated’- to be considered the son of a heathen princess with all the attendant comforts and pleasures and chose to share in the sufferings of his enslaved compatriots. He found the strength to make such a redemptive change to his life by gazing intently on God the Arbiter and by looking towards ‘greater riches’. What riches? Along with Saint Paul, Chrysostom marvels at the fact that, for the prophet Moses, this ‘greatest bounty’ wasn’t ‘the heavens and that which is in the heavens’, but ‘the persecution of Christ’, that is to struggle to his last breath to submit to the will of God and to be reproached and mocked even by those whose benefactor he had been. 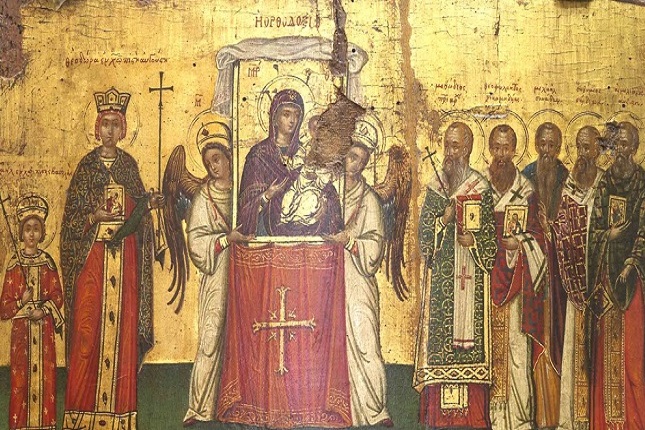 After this, Saint John asks us: ‘Who do you suffer for? Only for yourself, perhaps? But Moses suffered for the salvation of the people of God’. The truth is, of course, that very often we don’t strive even for our own salvation. We’ve reduced the faith, the ‘sword of the Spirit’, to a drawing-room ornament, without potential and without the ability to cut. On a double-edged sword, one edge points at the opponent, the other at the person wielding it. You’re called upon to cut only if you’re ready to do so. Faith isn’t the still life of an ornament. It requires effort and preparedness to stand correction, starting with ourselves. Today we celebrate the triumph of a real two-edged sword, the Orthodox faith, over fallacy. It’s purpose, however, is not merely to ‘slay’ heretics in no uncertain manner. Above all, its purpose is to ‘operate on’ us, cleaning not only the superficial wounds but penetrating ‘even to the joints and the marrow’  (Heb. 4, 12), in order to separate the putrid from the healthy, the dead tissue from the living, the false from the true.

Thereafter Saint Paul  presents a series of fighters for the faith, mentioning first four of the Judges and then the prophets David and Samuel. He begins with athletes of the faith  who may not all have been  models of an ‘exemplary life’ but who struggled sincerely and honorably. Immediately afterwards, of course, he refers to the achievements of the champions of the faith, martyrs and ascetics, who suffered the most terrible torments and renounced all perishable and earthly things because of their unshakeable faith and burning love for God. Among the fruits of their faith he mentions two points which seem contradictory: ‘some avoided the blade of the sword and others were slain by the sword’.  Saint John Chrysostom asks Saint Paul: ‘In the end, which group do you praise and admire?’ And he provides the answer himself: ‘Both. They’re both miracles of the faith, either for achieving great things or for suffering greatly’.

The saints suffered sorrows with fortitude, because- as Christ himself confirmed- they were deeply convinced that it would not benefit people if they gained the whole world but damaged their soul. This is why the balance which had on the one side the world and on the other the soul, always tipped to the side of care for the soul. This is why they were able to gain worth greater than the whole of the world. This is also why the scale which has on the one side the world and all the supposedly important things and important people and on the other the saints, always tips in favor of the saints, since ‘the world was not worthy of them’.

They await us at the table.

The emphasis on the great glory of the saints isn’t aimed at making us feel inferior. Saint Paul, as a true pastor, healthily fortifies our self-confidence, reminding us that Christ, who created all things in the beginning, has something greater in store for us. Not that we shall enjoy ‘greater salvation’ but that we shall be allowed to live in the times when redemption in Christ has come to pass and that the waiting period for the final glory will be shortened for us. So, while not belittling those prominent fighters for the faith, he also honors us. Saint John Chrysostom explains: ‘It’s like what happens with a caring father. He tells his more advanced children not to eat until their other brothers and sisters have arrived. In this way, those who strove so many years ago will take their crowns at the same time as we do. And because they love us so much, they’re more than happy to wait, so that we may all share in the same joy’.

In view of this, how can we justify not giving our all so that we don’t forfeit the crown of faith?