(Homily on the 5th Sunday in Great Lent)

The fifth Sunday in Lent, the Sunday [which marks the end of the week] of long vigils and great ascetic efforts, the week of profound lamentation and sighing, the Sunday of the greatest of all the women saints, our blessed mother, Saint Mary the Egyptian.

She spent forty-seven years in the wilderness and the Lord gave her something he rarely grants to any of the saints: for years on end she tasted neither bread nor water. When questioned by Abbas Zosimas, she replied: ‘People shall not live by bread alone’ (Matth. 4, 4). The Lord nourished her in a special way and guided her in the hermitic life, in her ascetic struggles. And what was the result? The saint turned hell into paradise. 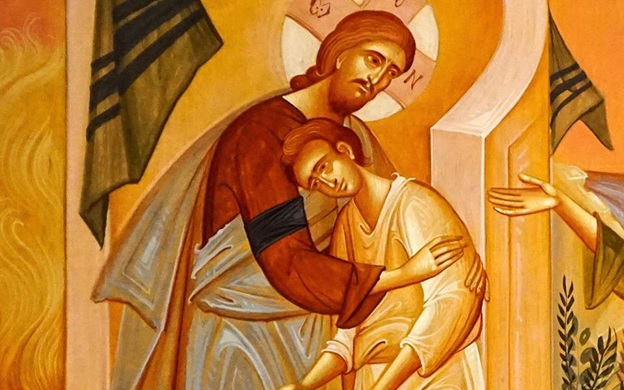 She defeated the devil and ascended high to God. How? With what? Through prayer and fasting, through prayer and fasting. Because fasting, fasting, together with prayer is a force that defeats everything else. A wonderful hymn from Great Lent says: ‘Let us follow the Savior of our souls, who has shown us victory over the devil through fasting’. He showed us victory over the devil through fasting. There’s no other weapon, no other means. The fast! This is the means to defeat the devil, any and every devil. An example of this victory is Saint Mary the Egyptian.

What a divine force fasting is. It’s nothing other than crucifying your body. Crucifying your body; crucifying your self. So long as there’s a cross, victory’s assured. Through sin, the body of Mary, the former harlot of Alexandria, was given over to enslavement to the devil. But when she embraced the Cross of Christ, when she took that weapon into her hands, she defeated the devil.

Fasting is the resurrection of the soul from the dead. Fasting and prayer open people’s eyes so that they can have a good look at and can really understand their self, can really see themselves. Then they see that every sin in their soul is their grave, their grave, their death. They realize that sin in their soul does nothing other than turn everything that belongs there into dead material: thoughts, feelings, inclinations become a series of graves. And then, then, a cry of lamentation bursts forth from the soul: ‘Before I am lost at the end, save me’.

This is our cry during this holy week: ‘Lord before I’m lost utterly, save me’. This is how we’ve prayed to the Lord this week, this is the prayerful exclamation given to us in the Great Canon by our great, holy father, Andrew of Crete: ‘Lord, before I am lost at the end, save me’. This cry concerns all of us, all of us who have sins. And who hasn’t?

It’s impossible to look at yourself and not find, in some corner of your soul, in some cranny, a sin you’ve perhaps forgotten. And every sin you’ve not repented over is your grave, your death. And if you want to be saved and to raise yourself from your tomb, cry aloud with the lamentation and prayer of Great Lent: ‘Lord, before I am lost at the end, save me’. Let’s not fool ourselves, brothers and sisters, let’s not deceive ourselves. If even one sin has remained in your soul and you haven’t repented and confessed it, but instead harbor it within you, that sin will bring you to the kingdom of hell. There’s no place for sin in God’s paradise. There’s no place for sin in the kingdom of heaven.

If you’re to be worthy of kingdom of heaven make sure to get rid of all sin within you, root out every one through repentance. Because nothing escapes our repentance. That’s the power our Lord gave to holy repentance. Look. Since repentance was able to save such a wanton woman as Mary the Egyptian had once been, how can it not save other sinners, each and every sinner, even the greatest sinner and criminal? Yes, holy and great Lent is the battlefield on which we Christians defeat the devil through prayer and fasting. We defeat all sins, all the passions and ensure immortality and eternal life for ourselves.

In the life of the saints and true Christians, there are examples without number that show that  it’s really only through prayer and fasting that we Christians defeat the demons, all those who torment us and want to drag us into the kingdom of evil, into hell. This holy fast is the fast of our virtues. Every holy virtue raises my soul and yours from the dead.