The Temptations of the Evil Spirit

In this time of Great Lent, we can see a common theme throughout the Holy Services (Great Compline, the Pre-Sanctified Liturgy, and the Divine Liturgy), as well as the Gospel lessons (including today’s). It is asking for God’s protection from the attacks of the evil one. The Lord Himself left us a prayer (“the Lord’s Prayer”) in which we are called to ask our Heavenly Father to “deliver us from the evil one” (Matthew 6:13). We are in dire need of this protection, because we are unable to face him alone.

But who is the wicked one? Originally, his name was Lucifer, which means “light.” God created him as a bright Archangel, and head of an entire order of angels, like the other nine Orders. Sadly, out of selfishness and pride, Lucifer and his order positioned themselves against God, and as a result, they fell from Heaven. Their relationship with God destroyed, they became evil demons. As Satan, he is an enemy of God and His creation (especially humanity). In his hatred of mankind’s happiness, he was able to lure humanity away from paradise. The evil one did not stop there, but he continues his assault on the people of God. That is why he was declared a “murderer from the beginning” (John 8:44), and has many names: evil one, devil, and Satan. He constantly tries to prevent us from being in communion with God. 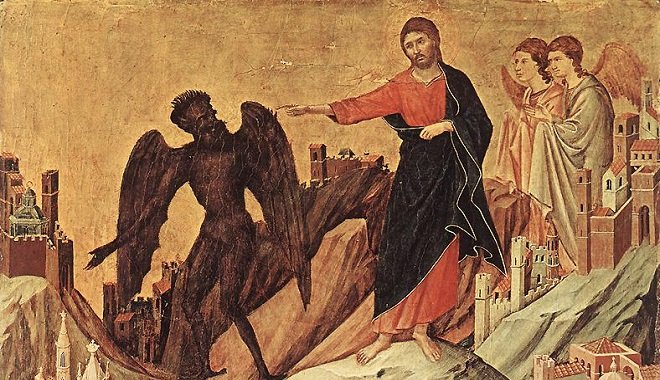 How does Satan do this? He begins by placing temptations in the mind, so a person will be enticed into sin, separating them from God. Sometimes these temptations are very strong. St. Paul the Apostle describes them as “fiery darts of the wicked one” (Ephesians 6:16). St. Peter describes other instances, where the devil “walks about like a roaring lion, seeking whom he may devour” (1 Peter 5:8). The evil one can also look small and insignificant. He makes the temptation seem trivial, like a tiny, harmless ant. But once a person allows the temptation entry, and gives in to it, the “ant” then becomes a ferocious lion. What was once “trivial” has now become serious, as the devil changes tactics: “Your sin is terrible, and God will never forgive you!” In this way, he draws a person deeper into sin through despair and hopelessness. This is why the Holy Fathers call the wicked one “the ant-lion.”

Satan is very cunning. Like an artist, he paints sin in attractive colors, increasing its allure. Another trick of the devil is the way in which he convinces people to not be ashamed of the sin they are about to commit, as “no one will see it.” However, as soon as the sin is committed, he ensures it is exposed to everyone, humiliating the person before society. How many scandals about famous people have we heard! There is no limit to the ways in which he tries to deceive, as he can even appear as if coming from Heaven. St. Paul writes that: “Satan himself transforms himself into an angel of light” (2 Corinthians 11:14). The devil is relentless, as he also had the audacity to tempt Christ Himself, asking the Lord to “fall down and worship” him – Satan! (Matthew 4:9).

The devil tries to act in secret, unseen by all. He disguises his actions in a masterly way, to have people believe that he does not exist, and that everything that is said about him is mythical or imagined. He covertly leads people astray with this deception (see 2 Thessalonians 2:10). The Lord has warned us that “the devil is a liar and the father of lies” (John 8:44).

With all of this, we can clearly see that the evil one is very dangerous, as he wants to appear as the ruler of the world. But we should know that Satan is not all-powerful, and that the time will come when his power is destroyed. When this happens, he, along with his demons, will be condemned by God forever (see 2 Peter 2:3 and Revelation 20:10).

Christ’s victory over the devil has already begun. Christ conquered Satan on the mountain of temptations (see Matthew 4:1-11). The Lord defeated him everywhere he encountered him tormenting the people, like the demonically possessed young man in today’s Gospel lesson (Mark 9:25-27). The Lord was also victorious over Satan on the Cross (Colossians 2:15). This was the very reason that Christ came to earth: “For this purpose the Son of God was manifested, that He might destroy the works of the devil” (1 John 3:8).

What does this all mean for us? We have nothing to fear, as long as we remain united with Christ. St. John Chrysostom says: “When we receive the Holy Body and Blood of Christ we come out of the church strong like lions; we carry fire and scare away the devil.”

In today’s Gospel, the Lord also told us of two other powerful weapons against Satan: “prayer and fasting” (Mark 9:29). This is why we should intensify our prayer and fasting during these holy days, with fervor in our hearts. In doing so, we can gain strength in the spiritual struggle against the evil one, who offers death. Amen.

Due to lack of time, we will explore this subject in more detail in our next Homily, God willing.