On the evening of Great Friday, we begin the service with a rather strange hymn. It’s a tropario which isn’t mournful but joyful. Not a lament, but a doxology. ‘God is the Lord and has appeared to us…’. He came to earth. And he showed us that he’s the one and only true Lord. We glorify him as Lord of heaven and earth.

But this hymn isn’t suitable for Christ’s burial. Because the burial was the time when Christ chose to hide. He preferred to conceal not just his nature as God- his divinity-, but also his human nature. And what lair did he choose to hide in? A grave. And he consented to being completely shrouded in the night of death.

Why this concealment, Lord? Why this challenge to our reason? Seeing you now ‘dead, naked and unburied’ who can glorify you as ‘the true God and Lord of Glory’? Who can believe that he whom we’re preparing to bury is one of the Trinity, the only-begotten Son of God the Father, the Lord and Master of the world? 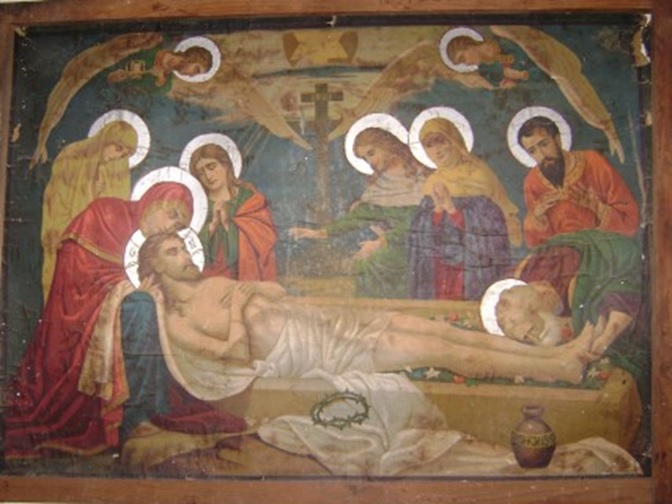 But the Church keeps its eyes open. And it demands that we see that, on the cross and in the tomb, Christ never for a moment ceased to be co-equal and consubstantial with God the Father.

This is why we changed the inscription which was written on the cross by those who crucified him. They wrote ‘Jesus the Nazarene, King of the Jews’. We corrected it and write: ‘The King of Glory’. Because Christ’s grave is the most light-filled place in the world. The source of divine light. ‘More delightful than paradise’! Why? Because Christ hid himself there for our sake, in order to free us from corruption.

Submitting to the will of his Father unto death, Christ humbled himself, was mocked, tortured and died. And although he could have made a spectacular demonstration of his divine power, he voluntarily ‘concealed’ his divine glory. In a grave!

But, as George Florovsky points out this voluntary concealment led to certain tragic revelations:

It uncovered the hatred and blindness of the world.

It uncovered the foolishness of human wickedness.

It uncovered the icy condition of our hearts.

And, above all, it uncovered the great lie of our supposed ‘freedom’. It showed us how benighted those people are who, by ridding themselves of God in their lives, become supposedly ‘autonomous’ and allegedly ‘free’.

Christ alone could ‘look down on’ death. But out of obedience to his Father and for our sake, he himself descended to wrestle with it. He experienced the agony of death in all its horror. He sweated blood. And, being human, he flinched.

But although he had the freedom to refuse his Father, in the end he disregarded the myth of human freedom. He submitted his will entirely to that of God the Father. He willingly agreed to die for us. And in this way, for our sake, he conquered death ‘having trodden down death by death’.