On the Sunday of the Paralytic (2)

Let us be ashamed then, my friends, ashamed, and bemoan our excessive indifference. Thirty-eight years that man had been waiting without getting what he wanted, but he didn’t give up. And he’d failed not through any carelessness of his own, but through being hindered and pushed aside by others. But he still wasn’t disheartened. On the other hand, if we’ve persisted for ten days to pray for something and haven’t obtained it, we can’t then be bothered to continue with the same fervour. And we often wait upon other people for a long time, enduring a lengthy campaign and performing servile tasks, very often with nothing to show for it, but we can’t abide to wait upon our Master with the appropriate zeal even though we’re guaranteed a reward greater than our labours (It’s written that our hope isn’t disappointed [Romans 5, 5]). What chastisement this deserves! Even if we couldn’t receive anything from Him, shouldn’t we consider just the opportunity to converse with Him continually to be worth countless blessings? 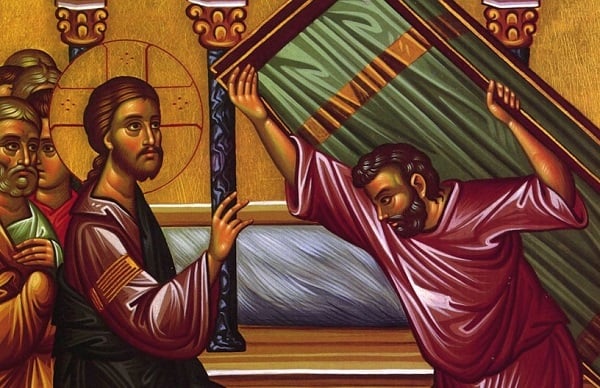 But continual prayer’s hard work. Is anything that belongs to virtue not hard work? This is the great conundrum: that pleasure is allied to vice, and labour to virtue. What can the reason be for this? From the outset, God gave us a life free of care and exempt from labour. We didn’t use the gift properly, but were perverted by doing nothing and were banished from Paradise. For this reason, He made our life in the future one of toil, His reasoning being, as it were: ‘I allowed you at the beginning to lead a life of enjoyment, but you became spoilt by liberty, and so I commanded that henceforth labour and sweat would be your lot’. And when even this labour didn’t restrain us, He then gave us a law containing many commandments, imposing it on us like the bits and reins horse-breakers use to control an unruly animal from prancing about. This is why life is laborious, because generally, not to labour is ruinous for us. Our nature is such that we can’t bear to be doing nothing, and the devil finds work for idle hands. Suppose that there are people who are temperate, perform all the virtues well, in their sleep, with no need of labour. How would they use their leisure? Wouldn’t it be for pride and boastfulness? But why, you might ask, has great pleasure been attached to vice, great labour and toil to virtue? Well, what grace would you have had, and why would you have received a reward, if the matter hadn’t been difficult? Even now I can show you many men who naturally hate having anything to do with women, avoiding interaction with them as impure. Shall we call these people chaste, shall we crown them, tell me, and proclaim them victors? Certainly not. Chastity is self-restraint, and a matter of gaining control over pleasures through struggle. Just as in war, the trophies are most honourable when the action is violent, not when no one raises a hand against us. Many people are languid by nature. Does that make them amiable? Not at all.

After defining the three states of being a eunuch, the Lord leaves two of them uncrowned, and admits one into the kingdom of heaven [Matth. 19,12] But why the need for wickedness, you might ask? Well, what’s the cause of wickedness if not our own wilful negligence? But, someone might say, there ought to be only good people. Well, what’s the attribute of good people? To watch and be sober, or to sleep and snore? And why, someone asks, isn’t it good that people should do the right thing without effort? You bring an objection that would make people cattle, gluttons making a god of their belly. To show the folly of these words, answer me this. Suppose there were a king and a general, and while the king was asleep or drunk, the general endured hardship and won a battle. Whose victory would you reckon it to be? Who would enjoy the pleasure of what was done? Do you see that the soul is more especially disposed towards those things for which it’s worked hard? This is why God has joined labours to virtue, wishing to make us attached to it. This is why we admire virtue, even if we don’t act properly ourselves. And why we condemn vice, even though it’s very pleasant. And if you say: ‘Why don’t we admire those who are good by nature more than those who are so by choice?’, I’d say: ‘Because it’s right to prefer those who labour to those who don’t’. Why do we work hard? Because we couldn’t conduct ourselves properly when we didn’t need to labour. In fact, if you enquire more narrowly, there are other ways that inactivity undoes us and causes us so much distress. Let us, if you will, shut someone up, only feeding and pampering them, not allowing them to walk nor letting them out to work, but letting them enjoy table and bed, and living in luxury the whole time. What could be more wretched than such a life? But, somebody will say: ‘Work is one thing, labour’s something else’. Indeed, but it was once in our power to work without labour. ‘Is this possible?’, you ask. It certainly is. God even desired it, but we couldn’t bear it. So He set us to work in the garden [of Paradise], marking out employment, but attaching no toil to it. If we’d laboured at the beginning, God wouldn’t afterwards have added toil by way of punishment. It is actually possible to work without becoming weary, as the angels do. To prove that they work, hear what David says: ‘You that excel in strength, you that do His word’ [Ps. 103, 20 Septuagint]. Lack of strength now causes weariness, but it wasn’t always so. Those who have entered into their rest have stopped working, as God has [Heb. 4, 10]. This doesn’t mean idleness, but cessation from toil. God is still working, as Christ says: ‘My Father has always worked and now I’m working [John, 5, 17]. So I would urge you to lay aside indifference and to be zealous for virtue. The pleasure of wickedness is short-lived but the pain’s long-lasting. On the contrary, the joy of virtue never fades, and the labour is for no more than a season. Even before the crowns are distributed, virtue relieves those who work for her, filling them with hope. Even before the time of vengeance, vice punishes those who work for her, wringing and terrifying their conscience and making them susceptible to suspicion towards everyone else. Are these things not worse than any labour, any toil?

And even if things weren’t so, if there were only pleasure, what could be more worthless than that pleasure? As soon as it appears, it flies away, withering and escaping before it’s been truly grasped, whether you’re talking about the pleasure of beauty, of luxury, or wealth, since there’s no stopping their daily decline. But when this pleasure also involves punishment and vengeance, what can be more miserable than those who pursue it? Knowing this, then, let’s endure everything for virtue, so that we’ll enjoy true pleasure, through the grace and lovingkindness of our Lord Jesus Christ, with Whom to the Father and the Holy Spirit be glory, now and ever, and to the ages of ages. Amen.