The Spirit of Truth

A characteristic feature of the excerpts from the Gospel of Saint John which are read in Church during the time between Easter and Pentecost is that they present certain essential characteristics of Jesus. He’s the Lord and God (Thomas Sunday); the Word who gives life to those in pain (Sunday of the Paralytic); the spring from which flows the water of eternal life (Sunday of the Samaritan Woman) and the light of the world (Sunday of the Blind Man).

Jesus often addressed his sublime and beautiful teachings to ordinary people who had no external mark of sanctity or high religious standing. Indeed, he didn’t avoid talking to women, as in the case of today’s reading, which made an impression on his disciples because it was an action which wouldn’t have been undertaken by any other respectable teacher of the time, given that women weren’t considered to be the equals of men and thus were unable to understand teaching. Jesus, however, revealed and embodied in his person God’s love for all people. He saw men and women as God’s creatures whom he wished to teach concerning the true God and whom, in particular, he wanted to redeem from enslavement to corruption and death. 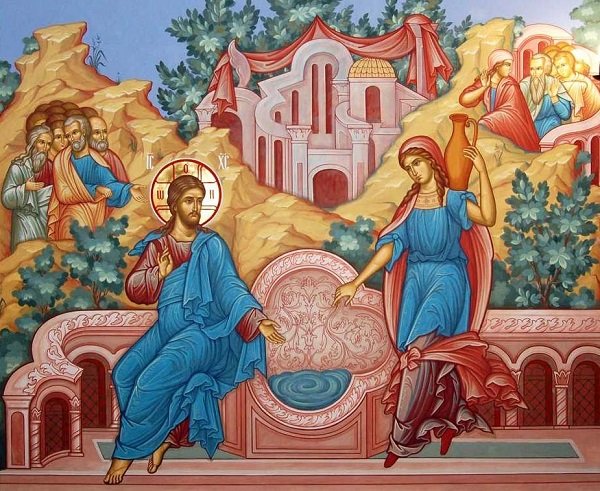 The narrative in John 4, 5-42 presents Jesus as crossing through Samaria and talking at Sychar, at Jacob’s well, with a Samaritan woman. Indeed, with a woman who, as emerges from the conversation, was not particularly virtuous or modest in her private life. Saint John employs the ‘cross-purposes technique’ in order to set the background for Christ’s teaching. Christ then goes on to talk about the ‘living water’ which never fails, about the worship of God ‘in spirit and truth’, and about his capacity as Messiah. We would dwell on one point in this important discussion between Christ and the Samaritan woman: when he reveals that he is God. ‘Yet a time is coming and has now come when the true worshipers will worship the Father in the Spirit and in truth, for they are the kind of worshipers the Father seeks. God is spirit, and his worshipers must worship in the Spirit and in truth’.

These words were uttered by Christ in response to the Samaritan woman’s question concerning the proper place to worship God: in the temple in Jerusalem as the Jews believed, or on Mount Gerizim as the Samaritans claimed. Jesus’ answer shifts the subject of the discussion from the place to the manner of the worship of God. It is precisely this manner of worship that Christ reveals to people. The dominant words in the answer are ‘spirit’ and ‘truth’. At another point in Saint John’s Gospel, he unites these two terms even more closely when he says: ‘the Spirit of truth … will guide you into all the truth’ (16, 13).

This is the most sublime formulation concerning God and the manner of his worship and can’t be grasped as a theory, but only by living in the truth and spirit of God, guided by the Holy Spirit, who is the Spirit of truth. In the final analysis, it’s a gift from God to us, through Christ. The truth isn’t something acquired through our mental powers and it certainly isn’t something concluded from a series of syllogisms, but is actually their major premise. It is, in other words, a revelation of God, the incarnate person of the Word who proclaims that he himself is the Truth. It follows, then, that truth isn’t an idea, but a person, a life, which is sacrificed in order to bring even more life to people.

The declaration that God is to be worshipped in spirit and truth should always be a wake-up call for us and remind us that the way in which we worship God can have no relationship whatsoever with any artificial placating of our conscience through the superficial observance of the letter, through a measured assessment of our actions or through the utilitarian notion of reward. Nor can it be related to any formalization of our attitude to God through routine, dry words or expressions the significance of which we don’t experience. ‘In spirit and truth’ means life in Christ and life in the Holy Spirit- in other words, it means participation in the life of the Church, the Church as the living body of Christ, not as a dead organism of the letter or a collection of dry rules.

The message of the extract, and in particular of Jesus’ phrase on which we’ve focused, is one of detachment from the lie of the moribund, religious formality in which we risk being trapped when we forget the ‘spirit and truth’ and when we wish, consciously or otherwise, to placate our own spirit, which may be on the wrong path.