We don’t want the Resurrection

It sounds harsh, and perhaps the observation that we don’t want the Resurrection will be hard for unsuspecting readers to believe. What blind people wouldn’t want their sight back; what sick person wouldn’t want to be cured? And Christ’s Resurrection is precisely the eyes in the darkness of our wicked blindness, health in the hideous sickness of our mortality, the saving escape from the blind alley of this world into the infinite and holy world of eternity, our transition from decay to permanence.

The Resurrection is an irrefutable fact. It doesn’t depend on our faith; it’s the foundation and support of our faith. Two thousand years ago, our Lord Jesus Christ, as God and human person, did battle with death and seemed to have succumbed to the fate of mortal Adam. He died and was buried. But since Jesus Christ was no ordinary person, he didn’t remain in the tomb, but rose and was seen. He conquered death and rose. He arose alive- many people saw and recognized him- redeeming the human race from the dominion and fear of death. 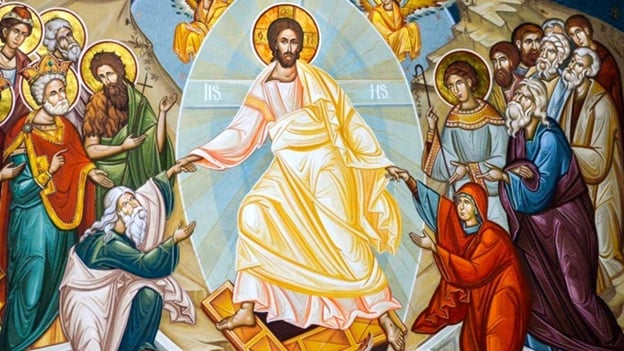 And yet, people don’t want the Resurrection. You don’t have to look far or make a special study to realize that society today, even nominally ‘Christian’ society, is not at all receptive to the Resurrection of Jesus Christ. Take a look around you and you’ll see that many people are adherents of Epicurean materialism, of the dogma of ‘Eat, drink and be merry for tomorrow we die’. They can see nothing beyond the gravestone because they’ve trapped themselves in the things of this world. This is why young and old panic at the thought of an economic crisis. The loss, or even restriction of the comfort and prosperity they enjoy seems to them to be unbearable. That their feelings and desires should not be satisfied, that they should be deprived of their pleasures, is intolerable.

In any case, as an event outside the human realm, the Resurrection was attacked right from the beginning. And it really is hard to understand and represents a challenge to our thinking that the first and most persistent doubters of the Resurrection were precisely those you’d have expected to embrace it without reservation, the disciples of Christ themselves. What they’d seen and experienced while they were with Jesus had convinced them that he was the Messiah, whom they limited, however, to their earthly understanding. They didn’t want the Messiah the prophets spoke of. They couldn’t conceive of him as he actually appeared- humble and meek. To their way of thinking the Messiah should have been an overwhelming conqueror, an all-powerful king, an invincible world ruler. They were proud of him and lauded him when he fed the multitudes and raised dead Lazarus. How could they accept that the Messiah would die and go to the tomb? So when they saw him nailed to the Cross and then dead in the tomb, they scattered and were disheartened. It was only Christ’s enemies who were uneasy in case he rose, as he said he would. They quickly secured the tomb and set a watch to guard it. Against whom? The terrified and despairing disciples who confessed explicitly: ‘We had hoped that it was he who would redeem Israel’ (Luke 24, 21)? ‘Had hoped’, once upon a time. Now however, their hopes had been dashed, had been extinguished.

And yet Jesus broke the ‘bolts of Hades’ and rose. He who taught the truth which sanctifies and liberates, who revealed his divine authority by signs, cures and resurrections of the dead now confirmed that truth through the sign of signs, his own Resurrection. Reassured by successive appearances, his hitherto fearful disciples became apostles and ‘like lions breathing fire’ deposed for the world their reliable testimony that ‘Christ has risen’. So, from the empty tomb of the risen Jesus, the light of hope poured out. A new path in our life and our eternal happiness opened up, one which we tread in repentance and faith.

Herein lies the problem for people today. They don’t reject Jesus. They admire his goodness and love all the benefits he lavished while on earth. It’s the Resurrection that bothers them. If only Jesus had stayed dead in the grave, a lot of people would have liked him better. He’s unwelcome and the target of attack today precisely because he is risen and the proclamation of his Resurrection has as its direct concomitant the injunction for us to repent and to deny our passions.

A Christ who didn’t rise can easily be assimilated into the countless gods and goddesses of paganism who not only don’t forbid but actively encourage the passions. But what about the Risen Christ who asserts that ‘I was dead, and behold am alive unto the ages of ages’ (Rev. 1, 18)? How can you allow him to chastise your misdemeanors, to restrict your wickedness and order your life? This is why a lot of people don’t want the Resurrection.