‘Rabbi, who sinned, this man or his parents, that he should be born blind?’

Christ has risen! He has risen indeed!

The sixth Sunday after Easter and we hear in church the Gospel reading concerning the Lord’s healing of the man who had been blind since birth. The healing of the blind man was a stinging rebuke to the Pharisees, who were not minded to receive the words of Christ[2]. The fact of being healed was the starting point for the man’s salvation, which, at the end of the reading, is expressed as a confession of his faith. 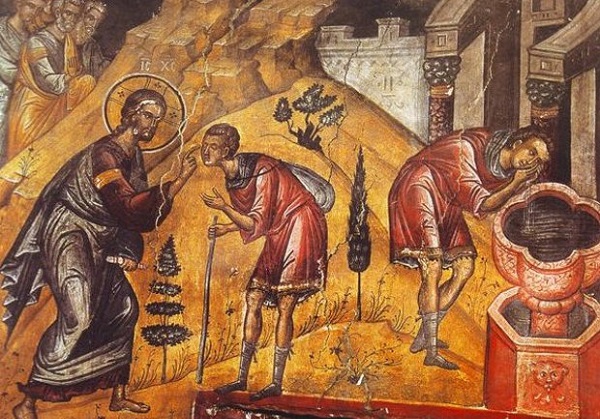 According to the Gospel narrative in John[3], as Jesus was going through Jerusalem, He encountered a man who’d been born blind[4]. Out of sympathy for His creation, He made clay by spitting on some soil, spread it on the man’s eyes and then told him to go to the pool of Shiloam and wash his face[5]. We should mention here that, at that time, people who were lepers, blind, childless or poor were considered to be under punishment from God for very onerous sins. Both in religious and social terms they were marginalized and, to all intents and purposes, were living dead. But then along came Our Lord, Who gave the lie to this whole idea, which was prevalent at that time.

The cause of his blindness wasn’t any sin committed by him or his parents[6]. He was born blind in order that the glory of God might be revealed. Sickness and pain aren’t always the result of our personal sins, but may be the consequence of our imperfect human nature or of our own individual constitution.

No sooner had he shown complete obedience to the Lord than his sight returned immediately and he could see normally. Everyone who knew him wondered whether it was the same person, how he’d been healed, how his eyes had been opened[7]. He boldly declared the truth before them, saying he’d been healed by a man called Jesus.

The blind man led a miserable existence, not only until the moment he was healed but even afterwards. Before he encountered the Saviour he lived in darkness, deprived on the great benefit of sight. When he came up against the true Light, the Pharisees, the men of darkness, were enraged with him[8], the reason being that the Lord had made the clay on the day of the Sabbath. There were 38 prohibitions in force regarding the Sabbath. One of these what no-one was to make clay on this day. So, for the Pharisees, the clay which the Lord made with His saliva was a misdemeanor. And it was for fear of the Pharisees that the man’s parents were hesitant to confess the miracle.

The Scribes and Pharisees, people who promoted themselves as ‘models’ of religious rectitude, understood nothing at all of what had taken place in the case of the man blind from birth. They had absolutely no idea about the miracle which had taken place. The only thing they were interested in was that the rules for the Sabbath day of rest had been broken through the healing of the blind man. They persisted in their casuistry, in the logic of their interpretation of the phenomenon and their explanations as to the ‘what’ and ‘how’ as proof of something which they didn’t really understand. They were actually living in spiritual blindness[9].

By healing those parts of us which are impaired and restoring us to health, Christ our God demonstrates that He’s the Creator of all parts of us. And when he said ‘So that the words of God may be made manifest’, He meant His own works, not those of the Father. Because the glory of the Father is already obvious to all.

So the way in which the blind man was healed is a wonder to behold. But the Lord could have healed the blind man simply through his words, without spreading clay on his eyes. The reason He used the clay was to kindle the man’s faith, which must have already been present, because, had he not believed, the miracle wouldn’t have happened. Besides, by taking action in this way, Christ would attract others to come to God, since they first saw the man blind and then with his eyes opened. Another reason was so that the blind man wouldn’t recognize Christ until the time when he was talking to the Pharisees about Him[10]. With earth He created Adam; with earth He created the eyes of the blind man. The Lord wanted to make a very specific point.

From today’s Gospel reading we can draw the following conclusions. First, by healing the blind man, the Lord demolished the prevailing notions of the time regarding blind people in general. Secondly, with this miracle regarding the blind man, the latter was granted two forms of sight: the first was that he was able to see everything that was around him; and the second was that he gazed upon Him Who is the ‘Light of the world’[11]. The next conclusion is that the blind man began to see more deeply into things and to perceive new truths about life, supported by the alpha and omega of the life of every human person, Jesus Christ[12].

Today’s Gospel is irrefutable proof that, apart from His perfect humanity, Christ is also perfect God. He healed not only the eyes of the blind man’s body, but also those of his soul. The latter recognized and confessed the complete power of the Lord over the world, and wasn’t afraid to say so to the Pharisees. It’s not enough to have faith; we must be prepared to confess Jesus Christ before other people.

The event of the healing of the blind man is a blessed opportunity for us, as Orthodox, to reflect on our faith and to renew the promise we gave on the day of our baptism[13]. Let’s allow God to work on us as He knows best and in whatever manner He chooses. The once blind man is a shining example of how much a person can change provided they wish to do so, encountering Jesus in their everyday life.