Sunday of the man born blind

At the end of today’s reading, words stand that we pass by very often. The blind man says to Christ, “And who is the Son of God?” and Christ answers, “You have seen Him and He is speaking to you”.

For us, the first words are so natural; the first event of our life, the first event of a meeting is that we see a person, but what was this wonder of this man who had never seen anything in the world and who, touched by the life-giving hand of Christ, of a sudden saw! And the first person he saw was his Lord and his God, Christ, the Son of Man. 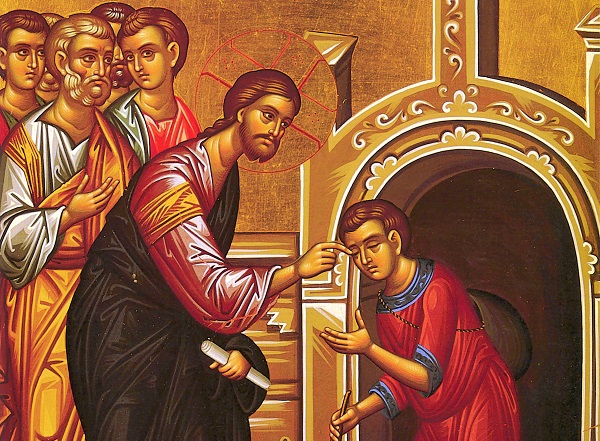 I remember a Romanian writer telling us in his biography what definitive, what profound impression the face of the first man he remembers made. He remembers himself as a child, and over him – the inexpressibly beautiful face of his father who was a priest, looking at him, with all human love, with all the tenderness, and all the depth of a human gaze. And he says that this was a first vision for him in the icon which a human face can be when it is lit from inside by love and by understanding, by depth and by eternity, a vision of God. Here this man saw God in the features of Him who was God and who had become the Son of Man.

I would like to attract your attention also to something different. On another occasion we read the story of a paralytic healed by Christ; and the Church, singing the praises of God on that occasion says, “As this man found no one to show mercy on him, the Son of Mary, God Himself, stooped down and met his need”. Because this man had not found another man to show mercy, to show compassion, to show concern, God has come down to him. Now we live in another time, we live in the time with God truly having become man in our midst, and more than this: He has made us to be living members of His body, an incarnate, concrete presence of His Incarnation, the temples of the Spirit, the place of the Presence. Now any man who is in need should at the same time find in each of us a man stirred to compassion, taught mercy and understanding by God become Man, and at the same time, simultaneously, meeting with us, he should be able to see the love of God in our eyes and to perceive the active, imaginative, creative action of divine charity in our words and in our deeds.

Since Christ has come into the world, the time of man has come; but not of man as severed from God, separated from Him, alien to Him, but a wonderful time when in man, in those who have discovered Christ, who have believed in Him, who have become one with Him – those men to whom God has entrusted the care of His world – people can both receive divine and human mercy and see human compassion, human love, human joy.

Is not this a great call, is not that something which should make us capable of great things? The time of God and the time of man is one, not only in the incarnate Son of God, but in this mysterious incarnate presence which each of us represents, the presence of God in the flesh, in human compassion, in human love, and this is an earnest claim and a challenge which the Gospel presents us with. Are we to one another and to those further afield that kind of humanity? New humanity, new creatures, new men with the newness of a renewed life, the life of God. This is what we are called to be.