The blind and the blinded

‘In his private thoughts, the man blind from birth said to himself: Was I then born without eyes for the sin of my parents? Was I then born as a sign for the unbelief of the pagans? I am unable to ask whether it is day or night. My legs do not support me against the rocks they strike. I have not seen the sun shining, nor, in image, him who created me. But I entreat you, Christ God, look upon me and have mercy upon me’ (verse at Vespers on the Sunday of the Blind Man).

‘The miracle of the cure of the man blind from birth is the third successive wonder to be associated with water. The first was that of the paralytic, at which Christ cancelled the power of the water and the pool at Bethesda by granting healing to the man who’d been ill for thirty-eight years. The second was that of the Samaritan woman at which Christ became the water changed into eternal life. The third is that of the blind man for whom Christ made clay with his saliva, before sending the man to the pool at Siloam in order to wash in its waters and become well. 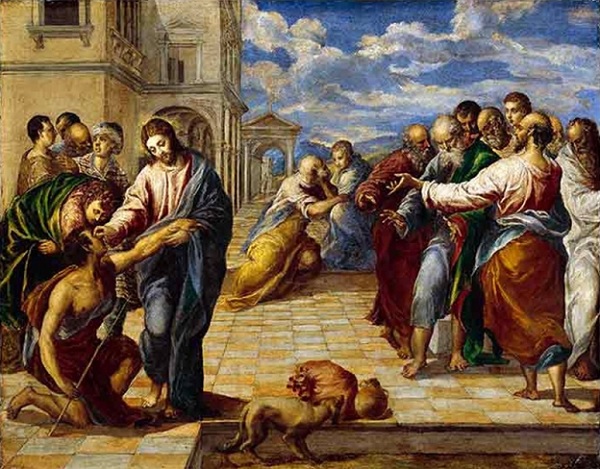 Christ made clay so as to demonstrate that he it is who took clay from the earth and made people from it. Given that the eye is such an important feature of the body, Christ made eyes for the man who had been born without them, in order to show that it is he, the Lord himself, who caused the effect through his spiritual power. He did not use water, but spittle, to make it known that grace had proceeded from the mouth which spat on the ground to make the clay. He sent the man to wash in the pool of Siloam so that no-one would think that the earth itself had curative powers. Besides, by the time he reached the pool, there would have been many people who witnessed that his eyes had been smeared with clay. Some people say that when he washed his faced, the clay remained but was transformed into eyes through the action of the water. Be that as it may, when the blind man opened his eyes, he also received the grace of having the eyes of his soul opened, as well. He was thus able to confess Christ, particularly in the face of the blasphemous charge of the Pharisees that he hadn’t kept the Sabbath. Their hypocrisy prevented them from rejoicing over the fact that someone could now see, thanks to Christ’s miracle. Instead, they again banished him from the synagogue. People with ailments were believed to be cursed and were kept at a distance. Once he was healed, the blind man was once more considered cursed by those who didn’t really love God but used faith as a means of self-justification.

The Fathers of the Church say that, by implication, the blind man represents the pagans, the idolaters, who are also blind. Christ spat on the ground and made clay to give them a sign that they should follow him in a different direction. Not by offering money, goods, philosophy or the passions, but by having confidence in him and by going to the water of the font, of baptism. Then the Christian people, formerly pagans, would have boldness to speak about Christ to everyone. They would be persecuted and would witness, but would later be recognized and glorified by Christ’ (adapted from the note in the Synaxarion of the Sunday of the Blind Man, after the sixth ode of the canon at Mattins).

There are moments in our life when we feel unhappy. Trials, failures, illnesses, a death in our circle, and life seems to be full of pain. The question is why? We address this question to God, to ourselves, to other people whom we trust. And it’s hard to get an answer. This is because we see life from the point of view of yesterday and today and we can’t see the future. There are moments when we don’t dare ask if it’s day or night, because any response would be of no importance to us, sunk as we are in the matter of ‘Why?’ The Gospel tells us, however, that there’s no specific answer to our question but that it depends on our relationship with a particular person, Christ, as God and human being. He is light and life. In our relationship with him, the dark corners of our unanswered questions are illumined, though perhaps not entirely, given that everything functions within the perspective of the kingdom of God, of eternity. Nothing is frozen in yesterday and today, because our relationship with Christ extends and stretches into the future. We will receive answers to our questions from the past and from today, but in the future. As long as there’s faith, expressed as confidence in him who is sending us to do the unthinkable: to wash the eyes of our unbelief in the water of life, that is himself. He who slakes the thirst of every traveler on the path of time.

Able now to see and no longer thirsty, the blind man didn’t find an assembly waiting for him. He didn’t find many rejoicing over the miracle but, rather, people who were worried about what it meant. The powerful cast doubt on the identity of the man who’d been blind. They doubted whether his physician and healer was from God. They doubted the word of the man and his testimony, considering him possessed or of unsound mind. The assembly, the community to which the blind man belonged by birth and religion, even his own family were all unable to accept the truth he set before them. So they declared him an outcast. Christ alone embraced and encouraged him, both before he gave him his sight and afterwards. The assembly, the Church, exists as a community. The problem is what Christ we believe in and what Christ we’re prepared to accept: the Christ of formalities, of our rights because we believe, of our own sense of purity; or the Christ who lovingly heals every blind eye and wishes every soul to see the light.

Silence is complicity. Some took the inheritance and portion of the pious people at the time of Christ, those who were blinded by self-sufficiency, habit or power. They were not moved to ask when we will find Christ: in the darkness of night or the light of the day? Let us allow Christ to open the eyes of our soul, of love, of sympathy and the transcendence of all fear. And let us build communities in the Church in which the joy and sorrow of others will be our own joy and sorrow, rather than mere formal expressions.