The Lord’s Ascension: the Visible Sign of God’s Reconciliation with Us

The Ascension is described by the Evangelists Mark (16, 19) and Luke (24, 50-51), as well as in the Acts of the Apostles (1, 9-11). As regards the time of the event, the book of Acts tells us that it occurred forty days after the resurrection of Jesus Christ from the dead. The Lord remained on earth for the duration of this time so that His disciples could realize fully that the resurrection had actually taken place. At this point, it’s worth pointing out that during this period of forty days, the Lord was not with His disciples continuously, thus allowing them to become accustomed to the idea of the end of His presence on earth. As regards the manner in which this happened, according to the description in the Biblical texts, it was an act of accommodation on the part of Christ to our human nature. According to the Fathers of the Church, this was comparable to the consumption of food by the risen Lord, which was to convince the disciples that it was no spirit standing before them. 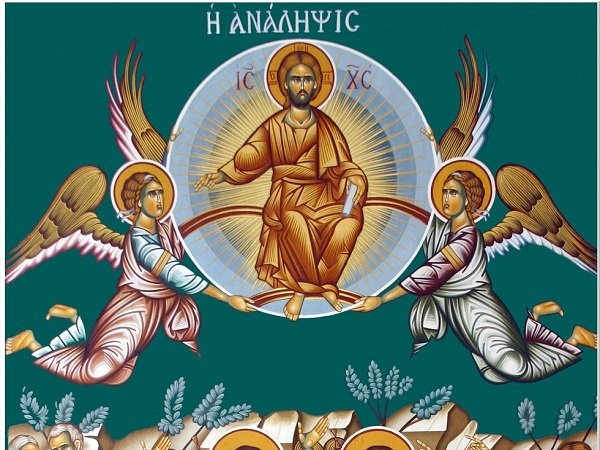 After the Fall and our exit from the delight of Paradise, we weren’t brought to glorification, but rather descended into thrall to decay and death. From having been on the path towards the likeness of God, we found ourselves in the tarnished image of Him under dominion of the sin of the devil. But as an affectionate Father, God Himself undertook our salvation through the incarnation of His Son and Word, so that through His sacrifice on the Cross and His Resurrection from the dead He could release us from the bonds of sin and death.

Our progress towards perfection and our failure to achieve it aren’t events which unfolded far way, in the absence of God. Through His great love for us, which is the same as His love and the uncreated energy of divine grace, God wanted to retrieve us from delusion and bring us back to knowledge of the truth. It was precisely in order to restore our fallen nature and save it from sin and death that God planned our salvation and put this design into practice.

This plan on the part of divine providence included the incarnation, the passion, the resurrection and culminated in the ascension, which marked the completion of Christ’s mission to the world. We should make clear at this point that the Lord’s ascension doesn’t mean that He was ever absent from heaven during His time on earth, just as His incarnation doesn’t mean the suspension of His divinity.

The plan of divine providence didn’t envisage merely the return of human nature to its prelapsarian state. It doesn’t simply redeem us from the consequences of the Fall, but it actually achieves the final goal of bringing us back to the path of becoming in the likeness of God. The Ascension is therefore the crown of the work of divine providence, since it completes God’s plan for our salvation, leaving to each of us separately the choice of accepting this path.

The completion of the work of Jesus Christ with the Ascension marks the coming of a new era, which is inaugurated with Pentecost and extends as far as the Second Coming. The period from Pentecost onwards is the final stage of Divine Providence, though without it constituting the end, since it is also moving towards the end, the Last Things. The Church of Christ preserves and transmits the revelation in Christ and, at the same time affirms its historical truth, under the guidance of the Holy Spirit. This revelation, which is presented with tangible means and historical facts isn’t restricted to them, nor is it restrained by the immediacy of the world, but it extends beyond it and makes possible the transcendence of the world.

Christ is not absent in bodily terms, but remains present in the Church in the Holy Spirit.. He remains united with the world through the sacrament of the Divine Eucharist which becomes a mystical encounter between us and God, while at the same time heralding the advent of the Second Coming.

In one of his discourses on the Lord’s Ascension, Saint John Chrysostom notes: ‘Essentially, the Ascension marks the reconciliation between God and humankind. This had not happened previously, not because God hated us, but because we were indifferent and ungrateful towards Him. And the change has occurred not because of our achievements, nor because we’ve altered our attitude and behavior, but because of the immeasurable love and interest of God… Now, with the Ascension, we who were not worthy to dwell in paradise, we who declined to the point of not being worthy to live here on earth and so were swallowed up in the flood, with the exception of the family of Noah, we, unworthy though we are, now ascend into heaven (Saint John Chrysostom On the Ascension of Our Lord Jesus Christ, Discourse 2, PG 52).