The wonderful Fr. Daniil and his amazing appearance with healing gifts

On another occasion, there was a monk from one of the neighboring ‘Wallachian’ [Romanian] kellia who had taken ill and had found some relief from eating little, slightly bitter cucumbers.

Winter came and he began to feel the same pains, from the same illness, so he went down to Saint Paul’s in the hope that he might find even some pickled cucumbers in the monastery to alleviate his pains. Unfortunately, there were none to be had. So, troubled and in pain, he started out on the climb from the skete of Saint Ann to Stavros. 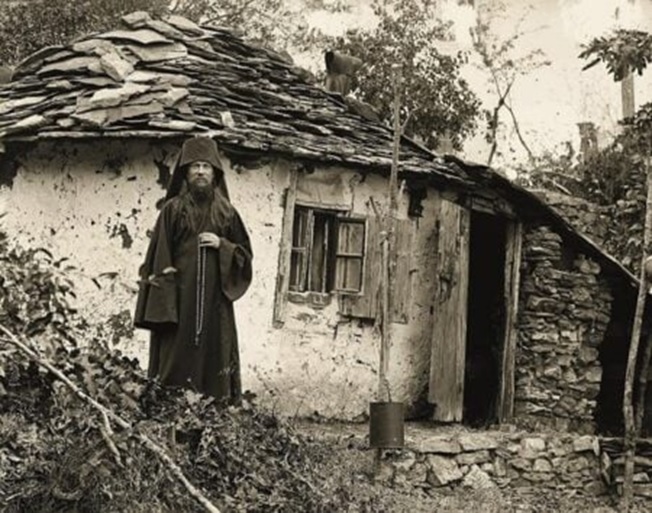 Even though it was winter and there weren’t even any pickled cucumbers anywhere, Father Daniil suddenly appeared before him and handed him six or seven fresh little cucumbers and then left immediately.

The ailing Elder glorified God and, once he’d eaten, was cured once and for all.

Father Daniil had brought love and a blessing from a faraway warm country (At that time there were no hothouses in Greece).

It is difficult for the rest of the world to relate to the fascination of Eastern Europeans with little cucumbers. They are, apparently, full of health benefits, but for most of us this is rather like being told that elephant’s foot jelly is a restorative after a surfeit of ouzo. And yet. My wife’s godmother fled Russia after revolution in 1917. She found herself in the émigré community in Paris in Word War II. In her capacity as a nurse, she visited the sick with the local Orthodox priest. The latter asked one man if there was anything he particularly wanted and he answered ‘Some chicken and cucumbers’. Tatiana Savilievna smiled at both the simplicity of the request and the impossibility of fulfilling it. The priest said they would pray for this. She was not at all happy at what seemed to her a frivolous waste of time, but she had no choice but to comply. The next morning, outside the man’s apartment, there appeared a plate of chicken and cucumbers. In the middle of Paris, with impossible food restrictions. I have to say that she was still rather reluctant to tell the story, but felt she had to admit that it really had happened. In her 90s she decided it was time she learned Greek, the better to communicate with young Greeks who were in Oxford at the time. One of these was a monk from the Skete of Little Saint Ann, the now distinguished Metropolitan Panteleimon of Veria, Naousa and Kampania [WJL].