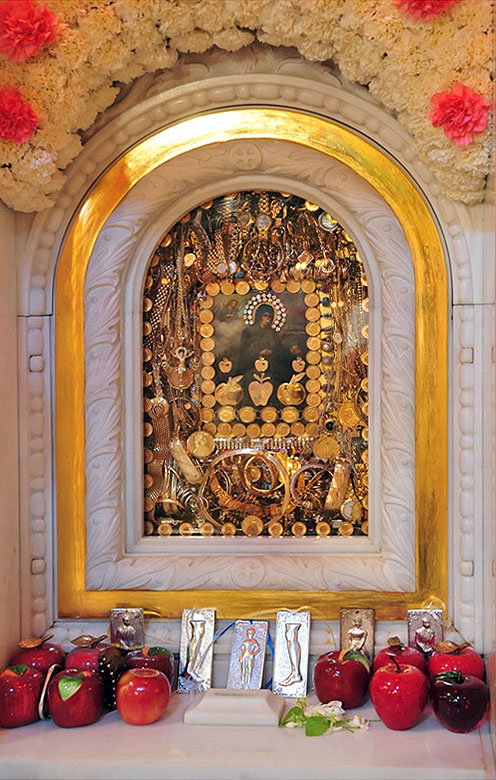 Blessed Irene was born in Cappadocia, into the bosom of a rich and noble family, after the death of the iconoclast emperor Theofilos (842). When Theodora became regent, she searched the empire for a wife for her son, Michael III (842-867). The imperial envoys took note of the beauty and nobility of Irene and sent her to Constantinople together with her sister, who later married Caesar Vardas, the brother of Theodora. On the way, they went past Mount Olympus in Bithynia and Irene visited Saint Ioannikios the Great (4 November), who greeted her and told her she’d become the abbess of the Monastery of Chrysovalantis.

Divine providence prevented her marriage to the emperor and, full of joy and with a light heart, she distributed her worldly goods and withdrew to the Monastery of Chrysovalantis, which had been founded by the patrician Nikitas (Nikolaos), not far from the cistern of Aspar, in an airy location, “far from the madding crowd”. At her monastic tonsure, along with the hair of her head, the young woman cut off all her ties to the world and devoted herself whole-heartedly to her ascetic struggles, in the knowledge that the more you weaken the body, the closer the inner person comes to God (II Cor. 4, 16). She had only one monastic habit, which she changed once a year, ate only bread and water and applied herself with joy to whatever she was told to do, without complaint. Continuous compunction gladdened her heart and made her face shine and, like fertile ground, she bore the fruits of the holy virtues.

She looked on all the other nuns as royalty and considered herself their maid-servant, willing to carry out the most menial tasks in order to serve them. The only words to come from her mouth were those of scripture or the holy Fathers, whom she studied assiduously. Although she’d been in the monastery less than a year, after reading with great admiration the Life of Saint Arsenios (8 May), who prayed from sunset to sunrise, she tried to imitate him. And with the assistance of divine grace she gradually became able to stand with her arms raised in prayer all day and all night. She fought with such wisdom to train her body to reach the stature of her soul that no ploy of the devil was able to harm her. When he provoked memories of the life of high status and prosperity which she’d once enjoyed, she went and confessed her thoughts to the abbess, doubled her asceticism and was immediately freed of these recollections.

After the death of the abbess, and contrary to her will, she was elected to the position and confirmed in it by the patriarch Saint Methodios (14 June).  Recalling the prophecy of Saint Ioannikios and considering it her duty to bear the afflictions of the weak (Rom. 15, 1), she lived from then on as an angel on earth, extending her fasts, praying all night and performing innumerable prostrations. By these means she attracted the grace of God and gained so much wisdom that she was able to lead a multitude of souls along the path to salvation. She asked the other nuns not to regard her as their superior, but as one of their number, who had been chosen to serve them.

With sweetness and patience she urged them live always and in all things according to the spirit of the Gospels, rejecting the vain attractions of high regard and respect in the eyes of other people. Unless they wanted their renunciation to be merely superficial, they should take care not only to preserve their purity, but also their meekness, virtues transcending nature which are given by Christ to those who pray with faith. Anything they gained or mastered, she would tell them, they should regard as a gift from God and remain in a state of uninterrupted compunction, rendering thanks to God. She forbade them to pray for their health, saying that there’s nothing more efficacious for the soul than an illness accepted with gratitude.

She received the gift of foresight from an angel of the Lord and became as it were a prophet of God in her monastery. Once she had rested a little after Mattins, she would summon the sisters one by one and with tact and discrimination would assist them to appear pure and guileless before God, revealing to each of them their innermost thoughts. She quickly became famous throughout Constantinople for her virtues and  the wisdom with which she guided her community. As a result, all kinds of people, rich and poor, young and old, would come to see her to ask her advice and place their hopes in her prayers. She taught all of them the benefit of repentance, which, at any point, would make God look kindly upon them. 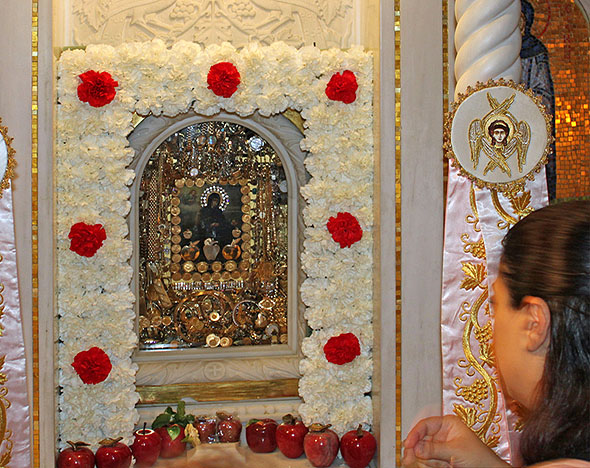 With the support of divine grace, she progressed without hindrance in the ascetic life and pure prayer. During Lent, until Easter, she ate no bread, just a few vegetables, once a week. Her all-night vigil had become as natural as sleep to other people and she spent the night with her hands lifted up to the heavens in prayer, lost in holy visions. She would sometimes remain in this position for two days at a time, even for a whole week, to the point that her disciples were obliged, in the end, to help her lower her numbed arms. One night, one of the nuns saw blessed Irene praying, miraculously elevated from the ground, while the two enormous cypress trees in the courtyard of the monastery had bent over so that their tops touched the earth.

They straightened only after the saint had made the sign of the cross over them. Her nocturnal prayer was terrible for the demons, who doubled their assaults against her at that time. One night, one of them threw the lighted wick of an oil lamp at her. Irene’s clothes immediately caught fire. But she remained calm and would have been burnt alive had not one of the nuns been awakened by the smell of burning flesh and clothes and forced the door to her cell.  In the midst of the dense smoke, she saw the abbess standing at prayer, totally unconcerned. She pushed her to try and put out the flames, but Irene said to her severely: “Why did you deprive me of such great pleasure by your untimely intervention? There was an angel in front of me, plaiting a crown of everlasting flowers, such as no-one has ever seen and I was just ready to take it when you pushed me”. When the nun stripped the remnants of her clothes from the abbess, a divine aroma filled the monastery.

On another occasion, a sailor came from Patmos, presented himself at the monastery and gave Irene three wonderful apples that Saint John  the Theologian had entrusted to him to give to her [Patmos is where Saint John lived and where there is a large monastery dedicated to him]. The first was enough  to feed her for forty days, during which a supernatural scent came from her mouth. She shared the second with the community on Great Thursday and kept the third as a precious talisman, a pledge of the incorruptible treasures of Paradise.

Thanks to her prophetic gift, Irene worked a multitude of other miracles and, in particular, foresaw the murder of Vardas, which was followed shortly afterwards by that of Michael III (867), as well as foreseeing the assumption of imperial power by Basil I, the Macedonian. With the assistance of Basil the Great and Saint Anastasia the Deliverer from Potions, she cured those who were possessed and saved a relative of hers, whom the emperor had in mind to execute as a traitor, by appearing to Basil in her full glory, radiating shafts of light. The emperor acknowledged his error, asked forgiveness and thereafter was favourably disposed towards the monastery. 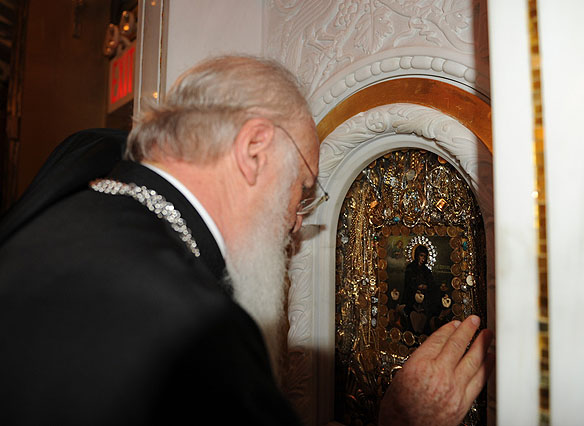 His All Holiness Ecumenical Patriarch Bartholomew during His visit at the Patriarchal Monastery of Saint Irene Chrysovalantou, NY (October 27, 2009)

Saint Irene reached the age of one hundred and three, retaining all her freshness and natural comeliness, a sign of the beauty of her soul. Her guardian angel told her a year in advance about the time of her demise and, when it came, she gathered the sisters, nominated the abbess whom God had chosen and, having admonished them to scorn things that are fleeting and so experience their beloved Bridegroom, she serenely closed her eyes and commended her soul into the hands of God. She was buried in the chapel of the holy martyr Theodore and her grave exuded the most wonderful aroma, manifesting to all the boldness she had acquired before God. To this day, Blessed Irene continues to intercede for those who call upon her with faith.