Sin and Sickness: An Orthodox View

A great danger lurks for those who make an effort to see the relationship between sin and sickness from a theological standpoint: that they’ll close the subject with harsh stereotypes which often enough can be heard even from the pulpit and will present theology and the Church as strict, or even uncharitable, in the two ultimate and vitiating conditions for the human person: sin and sickness. This is precisely where the wounded person, the sinner and the invalid, have the greatest need of the Church, the priest, the theologian and every other Christian. 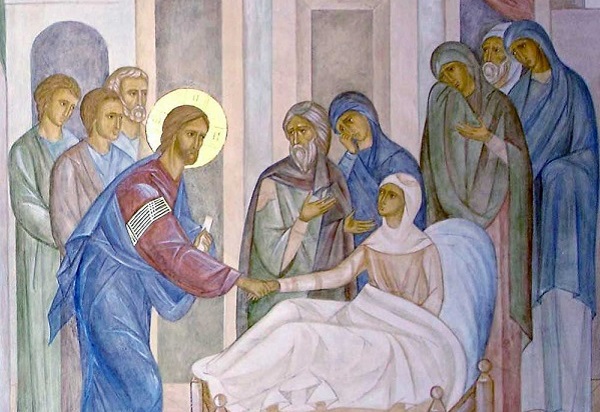 It requires authentic spiritual experience, therefore, and great discernment if we’re to approach this closely-bound pair- sin and sickness- with the truth of faith and theology and without ignoring the core of faith and theology, which is love and charity. According to Saint Gregory Palamas, for those of us who don’t have any such immediate experience the safest path is to have recourse to the Holy Fathers and outstanding Elders who were guided by the Holy Spirit. Our starting-point should always be the assurance of our Biblical texts which, according to Elder Sophrony at Essex, keep us from making clumsy, amateurish efforts.

We shall attempt, therefore, to place the issue within the framework of the Biblical narrative, with some historical retrospection and then move on to point out some facets which we believe are of special significance not only for their theological gravity but, more particularly, for their pastoral relevance.

Sickness and pain have presented a particular problem to people throughout the ages, especially in terms of understanding them. In the ancient world, people wanted not only to cure pain and sickness, but also to explain them. It may be, that in very ancient times, when the means of cure were few and often ineffective, people were forced more into a metaphysical interpretation of pain and sickness and less towards biological causes. In the ancient East, both the Far and Near, people saw sickness as a scourge unleashed by spirits or gods because of an oversight in worship or an act of hubris. The spirits or gods were enraged and, as a consequence of this, sent sickness, which people attempted to dispel through exorcisms, supplications and sacrifices. It’s no coincidence that, in the ancient religions, the role of doctor was undertaken by the priest or shaman as an intermediary between the material and spiritual worlds.

Things changed greatly from the time when the ancient Greeks founded and developed the art and science of medicine, through systematic observation. Most people are aware of the continuum of history from Hippocrates, through the Christian, Galen, and down to our own days. It’s worth noting at this point, however, that medicine wasn’t merely born in Greek culture but flourished therein over many centuries. According to the sources, Greek doctors were greatly superior to Roman ones. The Byzantines always had exceptional doctors. During the period of Turkish rule, the Greek diaspora produced important medical figures. Even the first Governor of free Greece, Ioannis Kapodistrias had studied to be a doctor. To this day, Greeks excel at medicine, both at home and abroad. At this very moment, in the most advanced countries of the European Union, Greeks are very much in demand as doctors. If we get over the urban myths of professional advancement, it may be that, behind this, the Greek tradition of wishing to see people healthy and cured of their wounds lives on.

We now come to the way in which Scripture deals with the phenomenon of sickness. Biblical revelation continues the ancient Eastern and Mesopotamian tradition which we mentioned above. Its attention focused almost exclusively on the religious significance of sin and cure, within the context of a divine plan for salvation. Apart from anything else, sickness is an expression of the dominion of death over humankind (I Cor. 11, 28-32).

In the Old Testament, health- and life in general in all its manifestations- presupposes a vital force. It’s rare for natural causes to be sought for sicknesses, and medical observations are particularly limited. Everything depends on God and sickness is no exception. So there are a host of references where God allows sicknesses, which usually involve the presence of intervening spiritual forces, such as the angel of destruction or the devil in the case of Job.

The link between sin and sickness is potent and indeed, almost automatic, in Biblical narratives. Sickness is not within the purview of the force of creation through which God created the world and people. It comes as a consequence of sin. At the same time, it’s a sign of God’s wrath which will strike sinners, sinful Israel, and the sinful world. There’s also, however, a pedagogical aspect to the experience of sickness, the aim of which is to hone our awareness of our sinfulness. It’s typical that in the Psalms, the request for healing is always accompanied by the confession of sins against God: ‘there is no healing in my flesh… For my sins have gone over my head… for in you have I hoped, Lord’ (Ps. 37). There’s also sickness which strikes the people of God as a whole, without those on the receiving end always being guilty. Here we have the great and intractable question of divine justice: Unde malum? (Where does evil arise?). Who is to blame? Let’s bear this thought in mind for later. The impasse created by this question in today’s rationalistic age is much greater than it was at the time of ancient Israel. And the way we deal with it in our pastoral care is, equally, a great challenge.