The Prophetic Ministry of the Word of God in Saint Sophrony

Christ is the miracle that astounds us. He is the sign of God for all generations until the end of times, for in His Person every impasse has found its solution. During His earthly life, ‘He lived the tragedy of the whole mankind, and yet tragedy found no place in Him.’[1] On the contrary, before His utter humiliation, He granted peace to His disciples.

In the Person of Christ was revealed the inapproachable and eternal God, but also the true man, as God had conceived him before the foundation of the world in the bosom of the Holy Trinity in His wondrous and pre-eternal Council. In His Person all things were fulfilled, for He is ‘the way, the truth and the life’.[2] 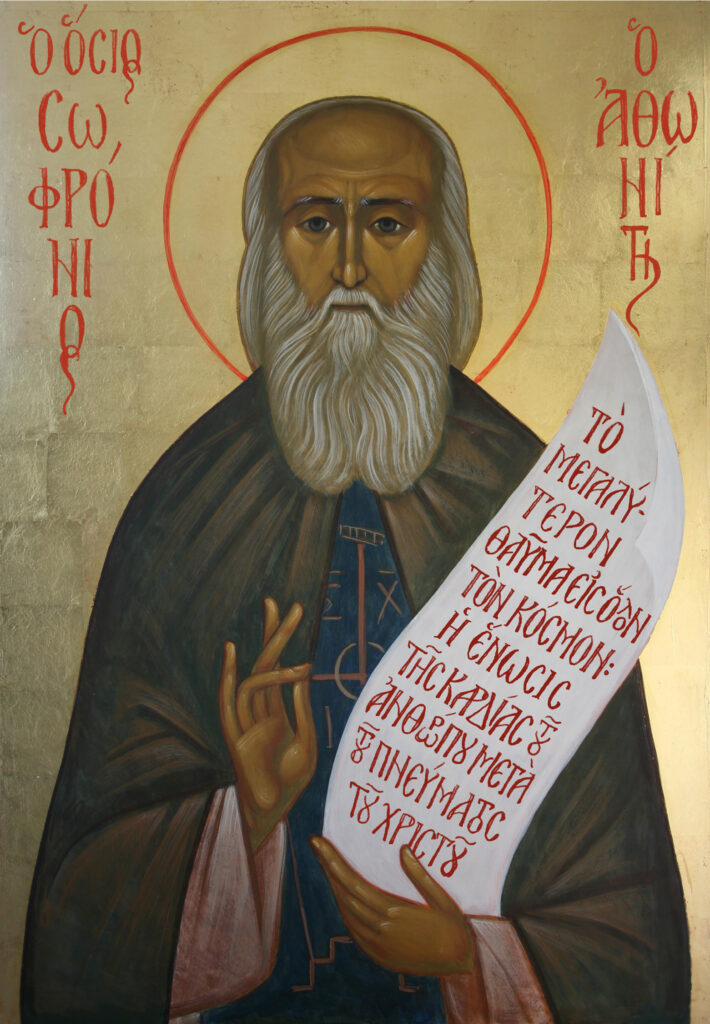 By extension, as imitations of Christ, all the Saints can also be said to be the signs of God for their generation, who give a solution ‘not of this world’ to the problems it is confronted with, be they philosophical, psychological or theological. They live in a natural way ‘the tragedy of mankind, and at the same time the peace of Christ’.[3]

‘A man shall approach and the heart is deep.’[4] It is difficult to speak about the Saints, because the man who still lives in the confines of the visible world cannot even imagine the depths of the heart of a holy Christian, the pain of his repentance and love, the infinite expanse that his prayer traverses like lightning, the freedom of his spirit.

Saint Sophrony’s earthly life lasted almost one century, but his spiritual life is unfathomable. As he himself writes about his attempt to depict the figure of his own Elder, Saint Silouan: ‘Anyone who has ever given himself over with a pure heart to contemplation of his inner self knows how impossible it is to detect the spiritual processes of the heart, because in its profundity the heart touches upon that state of being where there are no processes. But now in writing this profile I find myself faced with just such a task – portraying the evolution of a great ascetic striver.’[5]

Likewise, we cannot speak about Saint Sophrony without diminishing his greatness. Yet, by the command of the Spirit and against his own desire to live in such a way as not ‘to be seen of men’,[6] he did leave us his writings. And the best way to know the spiritual portrait of this holy man is to read his books. Every paragraph is the fruit of his prayer and the Elder is fully present in his words.

Saint Sophrony received the great blessing to rejoice in the vision of the uncreated Light when he was but an infant, yet from the first years of his youth he also felt very acutely the absurdity and vanity of temporary life. His intellectual erring on the alien paths of transcendental meditation was interrupted by the saving Sinaitic revelation that God brought before his eyes: ‘I AM THAT I AM.’[7] In his repentance he ‘would pray like one demented, weeping copious tears, afflicted to his very bones.’[8] The cry of his prayer reached back ‘to the source of the world’s tragedy’.[9]

Elder Sophrony ‘ardently loved Jesus Christ, God our Creator and Saviour’, and, ‘without fail’, according to his own words, he experienced ‘two states of being that would seem to be diametrically opposed: descent into hell (of repentance and love) and ascent into heaven’.[10]

Until the end of his life, he spoke with infinite gratitude about his Father in God Saint Silouan, whom he called ‘the most important event of his life’,[11] the greatest blessing, and he attributed every gift from on high to his prayers. He considered that the purpose of his life and his greatest task was to minister unto the word of his Elder.[12]

Saint Sophrony lived among us with great simplicity. He was warm and loving, but you could not forget for one instant the Christ-like otherness of his soul. He had a different mind, different feelings, different thoughts. Every contact with him was an opening of life. When he opened his mouth it was as if he snatched the word from God and brought it down to earth. Rather, he was incarnating the word of God in his own life. As he himself confesses: ‘His words, like fire, were imparted to my mind and heart, and I learned to see things from His perspective, because His word became my life.’[13]

Certainly, when we say that the Elder was a man of the word of God, we do not mean that he spoke about the word of God, but that he was a bearer of the quickening power of the personal God. The divine word resounded like a harp in his heart whether he was awake or asleep. In other words, he was the bearer of the word which is born in the heart through prayer and which regenerates man when it visits him, whilst when he imparts it to the others, it informs them with grace.[14] It transforms and renews them, showing unto them the ways of salvation.

We often witnessed miracles in his presence, sometimes amazing ones. However, he would never seek for them, neither would he pay much heed to them. He would pray for the ill, because he had compassion on people and desired their pain to ease, but his prayer had as its main target the heart of his neighbour. He knew that the greatest miracle in all the created world is the union of man’s heart with the Spirit of God. For this reason, he was consumed by the desire to minister this union of the temporary and earthly existence of man with the Light of the eternity of God.

He emphasised the importance of calling upon the Name of the Lord Jesus so that the impasse of human tragedy may be be overcome and that man may be born in the eternal Kingdom. He says about himself: ‘When the pain of the heart reaches the limits of physical endurance, the invocation of the Name of Jesus Christ brings the peace that keeps man alive.’[15] He ‘tormented’ with fiery prayer everything he did or said.

He also gave the greatest importance to the Divine Liturgy, whose celebration enraptured and inspired him. He said that in our times, when it is no longer possible to find favourable conditions for hesychastic life, if we celebrate the Divine Liturgy with attention, fear and the appropriate preparation, it brings the same results at the level of the spirit, the same sanctification as the prayer of the heart. For this reason he was mindful to impart to his monks and to all those who asked for his help, his love for the Divine Sacrament and the knowledge of a deeper approach to it.

Just as Moses desired to see the whole people of God prophesy, so also Saint Sophrony longed to impart to those around him the breath of the Holy Spirit, the inspiration of an artist. He even said that the Christian must be an artist in his spiritual life. As the artists are possessed by the object of their art and strive to find the perfect expression for their inspiration, so the Christian should be possessed by Christ and strive to refine his relationship with Him, running ‘that he may apprehend that for which also he is apprehended.’[16]

For some, the neighbour becomes a hindrance, for others even hell, whilst for our holy Fathers Silouan and Sophrony, the brother was their life. God enlarged their heart to embrace heaven and earth, just as Christ spread His holy hands on the Cross to embrace all people.

As a conclusion, we will quote the words of the Saint:

‘A single saint is an extraordinarily precious phenomenon for all mankind. By the mere fact of their existence – unknown, maybe, to the world but known to God – the saints draw down on the world, on all humanity, a great benediction from God… Thanks to these saints – whom the world does not know of – the course of historical, even of cosmic events, is changed. So then, every saint is a phenomenon of cosmic character, whose significance passes beyond the bounds of earthly history into the sphere of eternity. The saints are the salt of the earth, its raison d’etre. They are the fruit that preserve the earth. But when the earth ceases to produce saints, the strength that safeguards it from catastrophe will fail.’[17]

This is why Elder Sophrony considered as a sign of authentic and holy life the prayer for the whole world, wherein the man of God, enlarged by the grace of the Holy Spirit, brings to God every soul that came into being from the foundation of the world and that will be born until the end of the world.

Another criterion of genuine and holy life for Saint Sophrony, was love and prayer for enemies. This phenomenon demonstrates the presence of the Holy Spirit, without Whose grace such a virtue cannot exist in this world.

[8] Archimandrite Sophrony (Sakharov), We Shall See Him as He Is, trans. Rosemary Edmonds, (Tolleshunt Knights, Essex: Stavropegic Monastery of St John the Baptist, 2004), p. 33.

[12] He expressed himself in this way in a letter yet unpublished.