‘Apostles gathered here from the ends of the earth’ or ‘Well met!’

‘Apostles gathered here from the ends of the earth…’

The assembly of the apostles from all parts of the earth, coming together in one place, as well as all the local Gethsemanes, that is wherever paraclitic canons are sung to the Mother of God at this time of year- that is everywhere- makes every country, each city, village, monastery, church, chapel and household into the whole world.

With arms open to the world. Here, there and everywhere in this small, wide and infinite apse of the Mother of God Broader than the Heavens, the whole world is to be found. 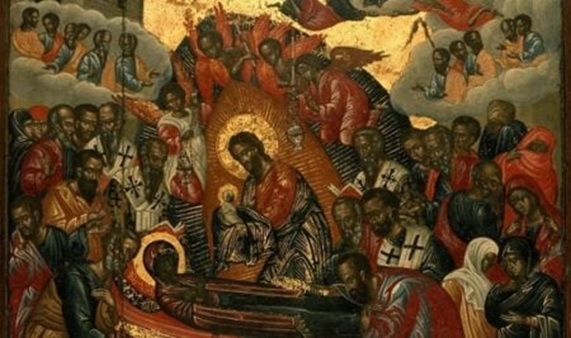 The Dormition of the Mother of God, by the Cretan iconographer priest, Victor. (detail) Benaki Museum

(Though it’s never seen by the billionaire tourists/astronauts who spend vast sums of money simply to go into space. Into utter emptiness. Whereas, as Saint Païsios used to say, we travel to God on a piece of dry toast).

‘Well met’, then ‘all the good friends…’ as expressed in  a particularly tuneful song from suffering, ever-sweet, and never to be forgotten Asia Minor. Asia Minor, which next year sees the 100th anniversary of the disinheritance of the Greek population and which has shown that it knows how to reestablish its world and pass on the baton of its traditions.

These traditions are, of course, the result of experiences and of the deep faith that ‘moves mountains’; they aren’t merely quaint, superficial or just for show. Because it’s experience that produces facets of life and offers again, through them, the delicate shades of experiences which they bring with them. Of faith, of love and of life, of sensitivity for everything that’s beautiful and attractive. A world of the love of beauty and refinement.

Well met, then, in the furnace-like embrace of summer in the village of Gethsemane. In August. On 15 August. 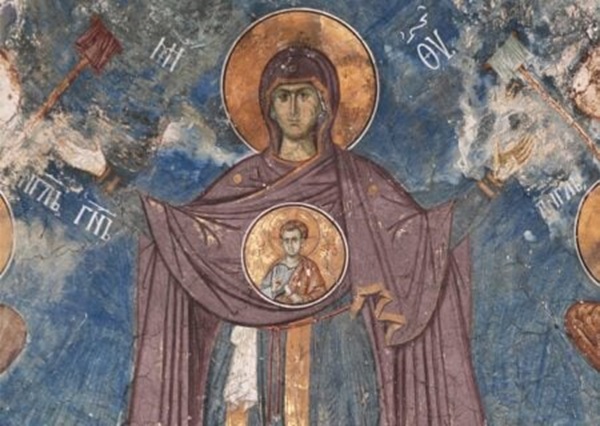 Like the period of Great Week, this Great Fortnight of the summer Easter also has its Gethsemane. In the former, the garden of prayer, of blood and of the beginning of the Passion. In the latter, a village, people, the world. In the broad embrace of Our Lady the Mother of God.

Limitless. It even contained the Uncontainable. And, in the village/world, it’s left us with a grave, a tomb, a memory, a recollection of a person who, out of all of us, was entirely exceptional. Who passed through our world and, as we shall hear shortly, never left it [the dismissal hymn for the feast: ‘in death, you did not abandon the world…’].

Naturally, we know this empirically, and wouldn’t dare believe anything else. How could we be left without the Mother full of Grace? Who else would we flee to? [cf. ode 4, Great Paraclitic Canon]. 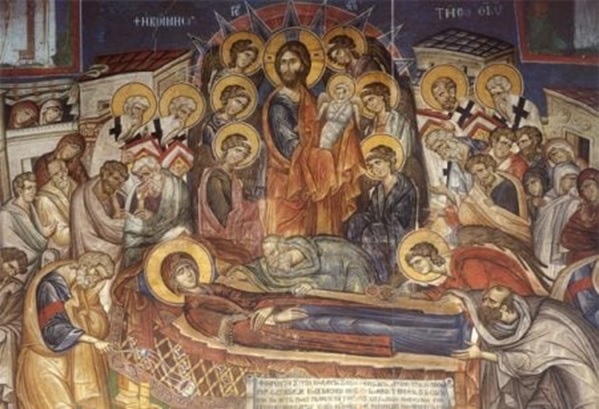 The Dormition of the Mother of God. Wall-painting in the Main Church of the Holy and Great Monastery of Vatopaidi (1312)

But it’s not fear of her absence that confirms her presence, since she, the Queen of All herself, who is Broader than the Heavens, rivets our being and creates the certainty of us standing in her company.

The heart of August and of the summer beats in time with that of the Mother of God.

And with those heartbeats, the year always ends, both the productive year, with the harvest, and the Church year, since they culminate in August and begin afresh in September. Agriculture, the fruits of the earth, the school year, businesses after vacation, and of course, the Church year [the indiction falls on September 1].