Decades ago, when I was in seminary (Anglican), a professor told me that he did not believe in angels. I was surprised and asked him why. He responded that he “did not think they were necessary… that anything angels did could be done by the Holy Spirit…” While this is obviously true, I noted that angels are found throughout Scripture, and that “necessary” was not a theological category – and that he himself was not necessary for that matter. The story had a happy ending…but has always remained with me as an example of how people sometimes go wrong theologically.

The Virgin Mary is among those theological matters that many Christians find “unnecessary.” She is not only unnecessary to them, but positively bothersome and considered a possible distraction from Christ Himself. “You’re worshipping Mary,” goes the charge. And the option then becomes to leave her out (other than when she is needed to play her annual part for the Christmas pageant).

But leaving Mary out is not an option for the Christian gospel. 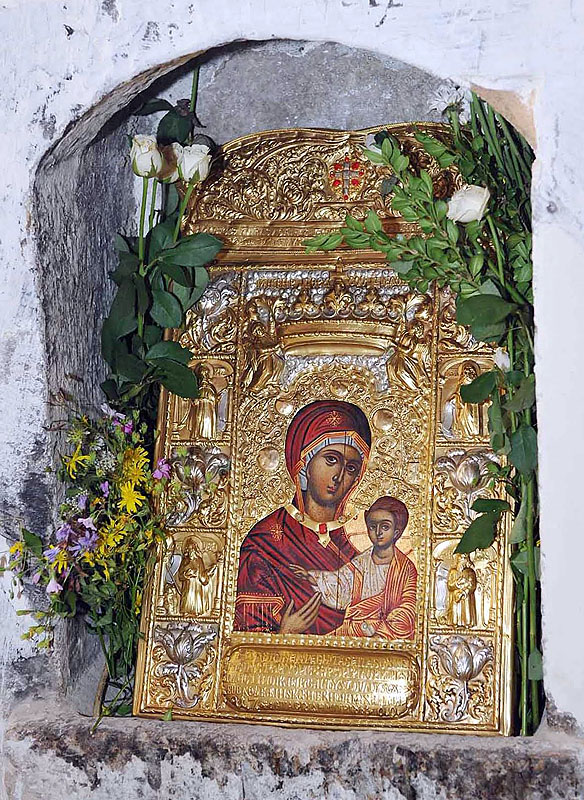 It is true that Mark’s gospel barely makes mention of her. But the Church has never declared that any single gospel is sufficient to the faith – indeed it has proclaimed that such an idea would be heretical (cf. Marcion’s Canon). The New Testament does not proclaim Christ apart from Mary – she is essential to the gospel.

The notion of a bare minimum gospel, or a least common denominator gospel, is a strange idea. In our modern culture, the ability to reduce anything to 140 characters is an asset. But truth cannot be expressed in such a manner, and certainly not in its fullness.

A driving force behind much of modern reform (and for the past 500 years) has been a desire to simplify. Thomas Cranmer boasted of having simplified the Church liturgy to a single book, noting that prior to his work, an entire book was required just to find out what had to be used from the many other books:

Moreover the number and hardness of the rules called the pie, and the manifold changings of the service, was the cause, that to turn the book only, was so hard and intricate a matter, that many times, there was more business to find out what should be read, then to read it when it was found out.

His single Book of Common Prayer is one of the masterpieces of English literature and a marvel of Christian piety. It was also, however, a drastic reduction in the tradition (a reduction vastly increased three years later in his second prayer book).

Today, Cranmer’s original work would be considered a heavy burden by many, too restrictive for worship. We now have Christianity by the numbers: 3:16

And though John 3:16 is a wonderful verse, it is not “the gospel in a nutshell.” It is a bumper sticker and now a cliche.

[God has] made known to us the mystery of His will, according to His good pleasure which He purposed in Himself, that in the dispensation of the fullness of the times He might gather together in one all things in Christ, both which are in heaven and which are on earth– in Him. (Eph 1:9-10)

This brings us to the life and worship of the traditional Orthodox faith. Tomorrow (August 15 on the New Calendar) is the Feast of the Dormition of Mary (her death). It is the greatest of the feasts that honor the Mother of God. For those outside the Orthodox tradition, such a feast might seem a distraction from the “gospel,” an attention given to Mary that should be given to Christ. But this is only a perception of a greatly truncated modern attention span.

For the gospel is a song sung by the Church. In general, it takes an entire year for the song to be completed. Every verse must be heard. And though there are summaries offered in every service, the whole requires the sustained effort of the worshipping community and the extension of our hearts and minds over a long course of time. Tomorrow, in the Feast of the Dormition, a single verse will be sung. It is the song of the death of Mary, the Virgin who as a young woman said yes to God and became the Mother of all living, the one from whom the eternal Word of God would take flesh and become man.

Mary herself offers a song:

My soul magnifies the Lord, And my spirit has rejoiced in God my Savior. For He has regarded the lowly state of His maidservant; For behold, henceforth all generations will call me blessed. For He who is mighty has done great things for me, And holy is His name. And His mercy is on those who fear Him From generation to generation. He has shown strength with His arm; He has scattered the proud in the imagination of their hearts. He has put down the mighty from their thrones, And exalted the lowly. He has filled the hungry with good things, And the rich He has sent away empty. He has helped His servant Israel, In remembrance of His mercy, As He spoke to our fathers, To Abraham and to his seed forever. (Luk 1:46-55)

God has indeed “exalted the lowly.” And as the Feast begins, the Church will take up God’s “song of Mary” and exalt her as He did. How can we not sing the Lord’s song?

Even Protestants remember this from time to time. The Anglican hymn “Ye watchers and ye Holy Ones” (written by Aethelstan Riley) has a verse that remembers her in words taken from the Orthodox:

In Orthodoxy, we sing all the verses!