The Holy Dormition of our Most Pure Lady, the Mother of God and Ever-Virgin Mary

If ‘the death of the saints is precious and the memory of the righteous is blessed’, with how much greater praise should we keep the memory of the ‘saint of the saints’ through whom the whole of sanctity came to them, that is the memory of the Ever-Virgin Mother of God? This is what we do when we celebrate the anniversary of her holy dormition or transferal, in which, even though she is a little lower than the angels, she yet surpasses to an incomparable degree the angels and archangels and all the heavenly powers as regards her proximity to God and the marvels that were performed and written  about from ancient times […]. 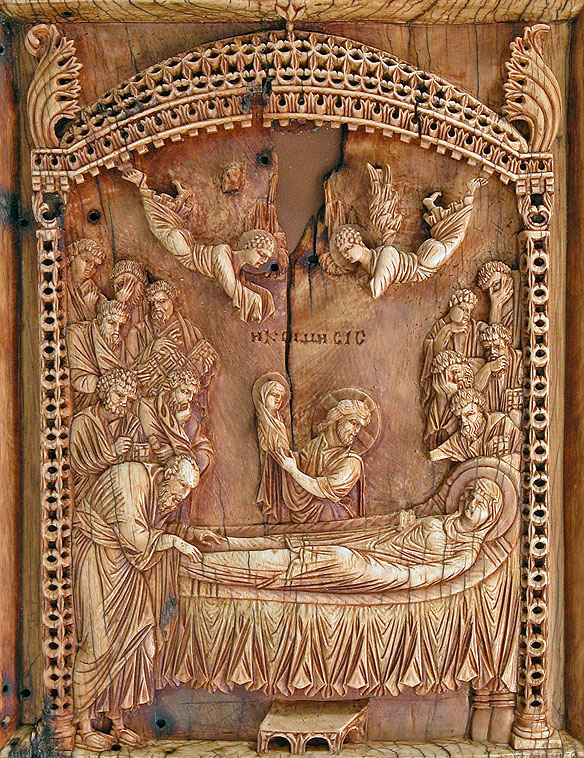 Her death brings life: she ascends into the heavens and eternal life and the memory of this is a joyful feast and universal festival which not only renews the memory of the wonders of the Mother of God, but also adds the general and extraordinary assembly of the holy Apostles from every part of the world for her most holy burial, with God-inspired hymns and angels watching over, attending and serving her.

The Apostles precede, follow, support, oppose, repulse, defend and sustain with all their power those who praise the life-giving and God-receiving body, the saving medicine of our race, the pride of all creation.

The Lord of the Sabaoth  and the Son of the Ever-Virgin is invisibly present and pays His mother His funeral respects. Her God-bearing spirit is placed in His hands and through it her body which was yoked to it will soon be transported to the realm of eternal and celestial life […].  Only she, standing between God and the whole of the human race, made God the Son of Man and all people children of God, turning the earth into heaven and deifying our race. She alone, of all women, was the Mother of God, by nature above all nature. She was the  queen of all worldly and other-worldly creation […].

Now that she has the heavens as a fitting dwelling-place, as the kingdom to which she belongs, transported there today from the earth, she stands at the right hand of the King of All, ‘attired in robes shot with gold and arrayed in diverse colours’, as the Prophet says (Ps. 44,11). ‘Robes shot with gold’ means that she was adorned with all the virtues. Because, with her Son, she is alone in occupying the celestial realm in the body which was glorified by God. The earth, the grave and death couldn’t in fact hold for long her life-giving and God-receiving body, the beloved abode of heaven and of the heaven of the heavens […].

For the disciples, proof of her resurrection from the dead were the winding-sheet and grave-linens which were left in the grave and were found by them when they came to seek her, as had happened previously with her Son and Lord. There was no need for her to remain for a short time on earth, as her Son and God had done, which is why she ascended directly from the tomb into the celestial realm […].

With her ascension, the Mother of God joined the things below to those above and enveloped everything with wonders, so that having been very slightly less than the angels, as we said before, when she had tasted death the superiority of the Mother of God over all things was increased […]. Throughout the ages and among all the most excellent departed, she alone dwells in heaven in her body, together with her Son and God […].

[The Mother of God] is the locus of all the graces and the fullness of all beneficence, the image of every benefit and of all goodness, since she alone was endowed with all the gifts of the Spirit and, indeed, was the only one who received into her womb, in a strange manner, Him in Whom the all the treasures of divine gifts are to be found… Now, with her death, she has advanced from here into immortality and has justly been transported and dwells together with her Son in the heavenly tabernacles and from there she oversees us and, with her unceasing prayers to Him, seeks his mercy upon all of us.

She is so much closer to God than all others who approach Him, not merely other people, but even ranks of the angels themselves. ‘The Seraphim were standing around him’ (Is. 6, 2); but David says, ‘the queen appeared at your right hand’. Do you see the difference in position? From it you can also understand how she is different in terms of order of rank. Because the Seraphim were around God, but only the queen was close to Him, and, indeed, standing at His right hand. Where Christ sits in the heavens, at the right hand of majesty, this is also where she stands, now that she has ascended from earth to heaven […].

Who doesn’t know that the Virgin Mother is that bush which was in flames but not burnt? And the tongs with which the Seraphim took the coal from the altar, since she received the divine fire without being burned. She is the threshold between created and uncreated nature and no-one could come to God unless they were really illumined by the rays of the truly divinely-bright lamp […].

Who could love the Son and God more than His mother, who not only bore Him as her only child, but did so without union with a male […].

It was through her that He came down to us, appeared and had encounters with people, whereas before He had been invisible. So in the future age without end, all progress and every revelation of mysteries and all idea of spiritual gifts will be impossible without her […].

Divine and now celestial Virgin, how can I describe all your attributes? How can I glorify you, the treasury of glory? The mere remembrance of you sanctifies those who avail themselves of it.

Therefore, transfer your gifts to your people, Lady, provide release from our distress, transform everything for the better through your power, by your grace… so that we may glorify the pre-eternal Word- Who became incarnate through you- together with His Father without beginning and the life-giving Spirit, now and until the endless ages. Amen.