The Dormition of the Mother of God – Transition to Life [2]

After the Lord’s Resurrection, it was Our Most Holy Lady who was the support of the Apostles and the newly-founded Church of Christ. It was she who taught the new Christians, guided them and comforted them in their sorrows. In the longer version of her Life, we read that, three days before her dormition, she was visited by the Archangel Gabriel, just as she had been at the Annunciation, and he told her of her imminent, glorious transition from death to life. Thereafter, in a wondrous manner, the Holy Spirit gathered all the Apostles in Gethsemane, in the house of the Mother of God, so that could get her blessing and be present at her sacred burial. Once they had sung the praises of God’s Mother, they asked her to entrust them with one last teaching. Our Lady then told them a parable, in which this world is like a trade fair, and those who make the best deals, that, is the best buys, are the ones who make the biggest profits. She went on to explain that the same applies to spiritual matters. Those who observe Christ’s commandments most scrupulously and with the greatest zeal are those who gain the greatest profit and will be glorified above all in the kingdom of heaven. And she urged them to persist in the ‘good fight’. 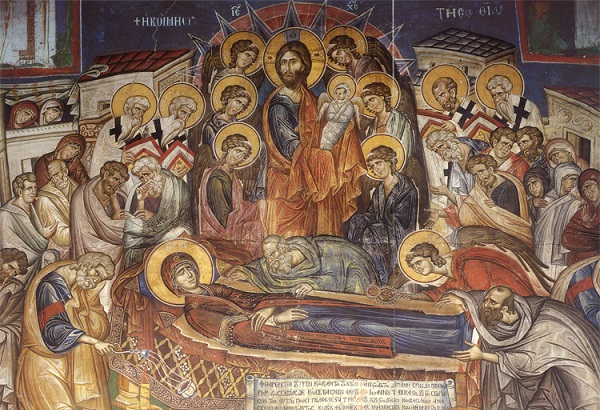 And how pleased Our Lady is when she sees us struggling for our salvation! What satisfaction this brings to her. And how much she herself strove while she was here on earth – even though she had no need to, since she was sinless – in order to leave us an example of perfect asceticism. In Gethsemane, where she lived, they found flooring, after her dormition, that had indentations from being used so much.

We should imitate her immediate obedience, her heart-warming humility, her hidden spiritual efforts, her fervent prayer, the constant vigilance which she exercised, her divine, burning love and the spiritual pain which pierced her like a knife at the Crucifixion of her Son.

For those engaged in the spiritual struggle, she is a ‘triumphant ally’, never mind if they previously lived a prodigal life. Let’s recall that for Saint Mary the Egyptian Our Lady became the ‘Guarantor’ of her repentance*. And once Saint Mary had withdrawn to the wilderness, where she strove mightily, Our Lady herself comforted her by appearing to her.

As the custodian of monastics, she’s also the one who provides divine gifts to them, especially to Athonites. It was she who gave the blessing of the prayer of the heart to Saint Maximos Kavsokalyvis, Saint Gregory Palamas, Saint Silouan the Athonite and also to Elder Iosif the Hesychast who is now linked to our brotherhood. And there’s another reason why today has special significance for us, who are his spiritual grandchildren: it’s the anniversary of his blessed departure from this life, after the Divine Liturgy, in 1959. He loved Our Lady so much- he called her his sweet little mother- and received a great many insights, divine manifestations and gifts from her. And, indeed, this love for the Mother of God is typical of the holy Athonite Fathers. At the sound of her name, they were unable to restrain their tears, which came from their burning affection for the All-Pure Virgin Mother. At the mere sound of her name, a soul which loves God is moved to admiration, thanksgiving and gratitude. So just the recollection of the Mother of God, that is thinking about her in the mind, is enough to sanctify those involved. The late Father Athanasios, from the Monastery of Iviron, used to say that love for the Mother of God saves people even if they’ve got no good works to show for themselves.

People today need to make the best use of the mediation of the Mother of God, which is for our salvation. In every sorrow and trouble, we shouldn’t forget that there’s the ‘helper of the distressed, defence, defender, and consolation of the despairing’, to whom we can have recourse and find comfort, and an immediate solution and answer. We pray that Our Lady the Mother of God, who has ‘passed over to life’, will always give her blessing to all of us, so that we can get through this life with as little damage and danger as possible from the deceptions and schemes of the evil one and that she will make us worthy of the heavenly kingdom of her Son. Amen.

* The Elder is using ‘repentance’ here both in the normal sense and also ‘monastic calling’. Monks and nuns live in the monastery ‘of their repentance’.