A Transition to Life: The Dormition of the Mother of God 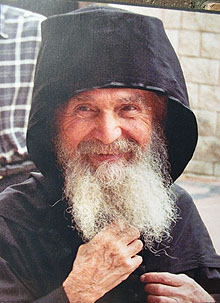 Every time we celebrate the Dormition of the Mother of God, it’s as if we’re having Easter – the Easter of the summer. Our Lady the Mother of God prepares Easter for us. A glorious crossing “from death to life”. A second Easter, holy spotless, life-giving for the human race, because today “the laws of nature are overcome”.

“How the source of life goes towards life, passing through death”, says Saint John the Damascan. The death of the life-giving Mother of the Lord transcends the concept of death, so that it’s not even called death, but “dormition” and “divine transition” and an emigration and immigration towards the Lord. And even if it’s called death, it’s a life-bringing death, since it transports to a celestial and immortal life.

The transition of the Mother of God, as an indisputable fact preserved by sacred Tradition, has been incorporated into the teaching of the Orthodox Church and has nothing to do with the ­­­­­pietistic beliefs of the Westerners concerning the conception without seed and life without death of the Virgin Mary.

The Virgin was the particular creation of God who surpassed all people and the angels. She is the only mortal ever to have lived a spotless life and to have become what is beyond the understanding of all reasoning beings- the Mother of God. Because she never sinned, never gave in to sensuous thoughts, it was proper that she lived on earth without the pains of the flesh, or illnesses. Even though she had a life-giving body, still, as a human being she was subject to the sickness of death and she did, in fact, die. But her body and soul were not separated from God. For a short time, the connection binding them together was loosed, as was the case with Christ.

After her death, her soul was united immediately with Christ. Because at the time of the Dormition of His Mother, attended by the celestial ranks of the angels and the saints, He took her holy soul, not merely to heaven, but “to His royal throne, to the heavenly Holy of Holies”, as John the Damascan tells us. And the life-giving and God-receiving* body of Our Most Holy Lady, after three days, was transported to the celestial realms, uncorrupt, to her Only-Begotten and beloved Son. In other words, we can speak of the resurrection of the Mother of God in the flesh. But this resurrection was not activated by Our Lady herself, but by her Son and God.

One witness of this resurrection/transportation of the Mother of God was the Apostle Thomas, who had not been present at her interment. He arrived late, as usual- three days late, in fact- and requested the other apostles to open the grave, only to find that the God-glorified body was not there. They did, however, see the Mother of God ascending into the heavens and giving the Apostle Thomas her Precious and Holy Belt, as proof of her ascension, rather in the same way as Christ allowed the same apostle to touch His wounds after the Resurrection.

The body of Our Lady – like that of her Son – did not undergo any corruption in the grave, that is it was not altered, it did decompose into the material elements that constituted it. In any case, since Christ’s resurrection, the bodies of many of His saints have not decayed and have become, in part, undecomposed relics. How much more reasonable it is that the God-receiving body of the Mother of God would not decay.

Saint Andrew of Crete says that the fact that the Mother of God did not lose her virginity at Christ’s birth had, as its natural concomitant, that her body did not decompose at the time of death. “The birth avoided despoilment and the grave did not accept decomposition”.

After her Dormition, Our Lady the Mother of God became the mother of the new creation, the Church of Christ. Because she had the central position in the dispensation of salvation, since it was from her that the Head of the Church, the Lord, took His human flesh. Now, in the celestial Church, she has the fullness of Grace and glory and boldness. She has become the benefactress of the whole of nature and creation, which is why all creation venerates her as Lady and Maiden and Queen and Mother of God. 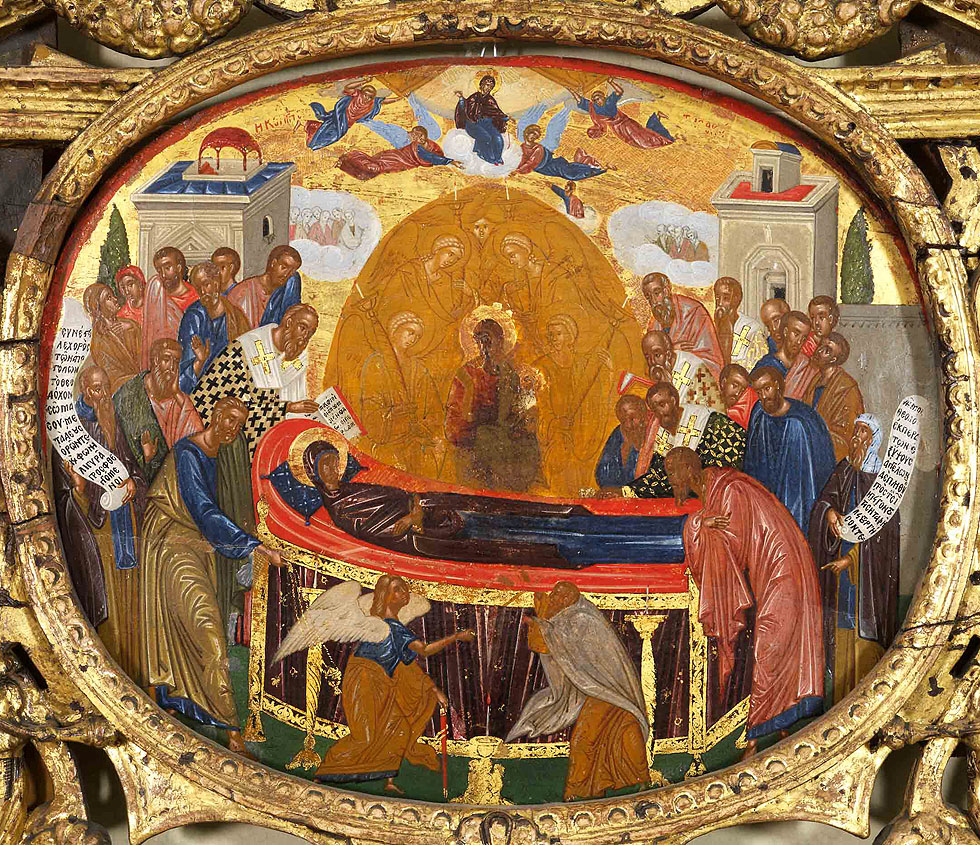 The Dormition of Theotokos, Cretan icon, about 1600

Through the Mother of God and because of her, the history of the whole world entered another orbit, incomparably more magnificent and superior to what had existed before her. No creature could have or could ever be more perfect than her, nor could she have been more perfect than she was. According to the Fathers, there are three things that Almighty God could not have made more perfect: the incarnation of the Divine Word, the Virgin Mother of God and the bliss that the saved will enjoy.

After the resurrection of Christ, Our Lady was the support of the apostles and of the newly-founded Church of Christ. She taught the new Christians, guided them and consoled them in their sorrows. In the expanded version of her Life, we read that the Archangel Gabriel visited her three days before her Dormition, as he had done at the Annunciation, and told her of her glorious transition from death to life. The Holy Spirit, in miraculous wise, then gathered all the apostles in Gethsemane, in the house of the Mother of God, so that they could be present at her interment and take her blessing. After they had lauded the greatly-praised Mother of God, they asked her to pass on to them a final teaching, as a legacy. The Mother of God then told them a parable, in which this world was compared with a trade fair at which whoever does best at trading will be the who gains the greatest profit. She went on to explain that so it is also in matters of the spirit. Whoever observes Christ’s commandments with the greatest zeal and heed will gain the greatest profit and will be glorified more greatly in the kingdom of heaven. And she urged them to persist in the “good fight”.

And, indeed, how greatly pleased Our Lady is when she sees us struggling for our salvation. What satisfaction this brings her! And she herself, while on earth, how hard she struggled in her quiet way- though, since she was sinless, there was no need for her to do so- so as to leave us with an example of perfect asceticism. After her dormition, they found in Gethsemane where she lived, slabs where had preformed her prostrations and they were deeply indented from all the wear and tear she had subjected them to.

Let us also imitate her direct obedience, her endearing humility, her secret, internal, spiritual effort, her ardent prayer, the constant watchfulness which she showed, her divine love, and the spiritual pain she felt as a knife at the Cross of her Son.

To those who struggle, she becomes a “supportive ally”, even if they have previously lived prodigal lives. Let’s remember that the Mother of God “stood bail” for Mary the Egyptian after the latter’s repentance. And when Saint Mary retreated into the desert to take on her relentless struggle, Our Lady herself consoled her with her divine appearances.

As novice-mistress of monastics, the Mother of God is also the provider of divine gifts to them, especially those on the Holy Mountain. It was she who gave the gift of the prayer of the heart to Saint Maximos Kavoskalivis, Gregory Palamas, Silouan the Athonite and also to the late Elder Iosif the Hesychast, who is directly linked to our brotherhood. Another reason why today is of particular importance to us who are the spiritual grandchildren of Elder Iosif the Hesychast is that it was on this day, in 1959, that he fell asleep in the Lord. He loved Our Lady very much- our sweet little mother, as he called her- and he received so many insights, divine appearances and gifts from her. And, indeed, one particular characteristic of the blessed Athonite Fathers is their love of the Mother of God. At the sound of her name, they were unable to restrain their tears which came from pure love for the Virgin Mother. Merely on hearing her name, a soul that loves God is moved to wonder, gratitude and  thankfulness. So even the recollection of the Mother of God, that is recalling the person of Our Lady to the mind, sanctifies the person who does this. The late Fr. Athanasios Iviritis used to say that love of the Mother of God saved people, even if they didn’t have any works to show.

People today have to use the mediation of the Mother of God, which is for our salvation. In every one of our sorrows and problems we mustn’t forget “the help of the saddened, the protectress, defender, comfort of the faint-hearted”, to whom we can have recourse and find consolation, immediate release and response. We pray that Our Lady the Mother of God, who has been “transported to Life”, will always give her blessing to all of us, so that we may spend the present life as safe and sound as possible from the deceits and wiles of the Evil One, and that she will make us worthy of the heavenly kingdom of her Son. Amen.

* The first Friday after Easter, a feast of the Mother of God, is often referred to in English, as that of the Life-Giving Spring. In fact this should be, Life-Receiving Spring. The most likely explanation, perhaps is a lapsus calami on the part of a translator, who read ζωοδότος for ζωοδόχος.