The Only-Begotten Son and Word of God, who became a human person for us (though He was sinless), voluntarily underwent the crucifixion, death and burial so that our human nature, which the father of evil had caused to be cast out of paradise in olden times, could be elevated. Christ rose, however, and was elevated to His initial glory, and then sent the Comforter, the Holy Spirit, to his disciples and apostles. After the God/Man/Word ascended into heaven, the eye-witnesses and servants of the Lord were in the upper room, as Saint Luke tells us, and after they had received the Holy Spirit they were unwilling to neglect preaching the Word of God in order to wait on tables. So they appointed deacons in their place. When the preachers of salvation sat down at table, they placed on it a napkin with a loaf on it, which was the Saviour’s portion and similar to those He had eaten when He was still incarnate among them, before His passion.

When the holy apostles rose from the table, the oldest and first among them took the loaf in his hands, raised it up and proclaimed ‘Great is the name’. The other disciples of the Word responded ‘of the Holy Trinity’. Then the deacon who was serving said ‘Glory to You in the name of Christ the Saviour’. And the apostles again answered ‘Glory to You our God’. The name of the Holy Consubstantial Trinity without beginning was said once and ‘glory to You our God, glory to You’ twice, because of the two elements, divinity and humanity, the two energies and two natures, and their perfect union in the God/Man/Word.

The holy apostles performed this rite both when they were together and when they were apart, after they’d gone out to teach all the nations. At the Dormition of the Holy, Most Pure, Ever-Virgin Mary, the Sinless, Uncorrupt, Mother of the Word, the Most Honourable and Sublime of all celestial concepts, the renewal of our race, the most precious, God-receiving vessel of the whole of the Divinity, the apostles, who were at the ends of the known world, were taken up in clouds and transported to Gethsemane to offer their services at the burial of the most pure body of the Mother of God the Word. By God’s will, which sees and arranges all things, the holy and great Apostle Thomas was not with the others at the burial of the Mother of the Word, just as, when the Saviour appeared to His disciples behind closed doors after His resurrection and taught them about peace, Thomas wasn’t there and didn’t believe the other disciples and companions.

Because of this good disbelief, he taught us, through touching the most pure members of the Saviour’s body- the ribs and the hands- that we should believe that He Who suffered the Passion while still among us is indeed the perfect God. So, in this instance, too, by the ineffable and unspoken will of Him Who orders all things and governs all things well, Thomas wasn’t present at the funeral of the Mother of God. He came three days later, borne on a cloud and immediately hastened to the grave, together with the other apostles, in order to venerate the life-receiving body of the Mother of God. And so the whole of the human race was given salvation and the correct faith. 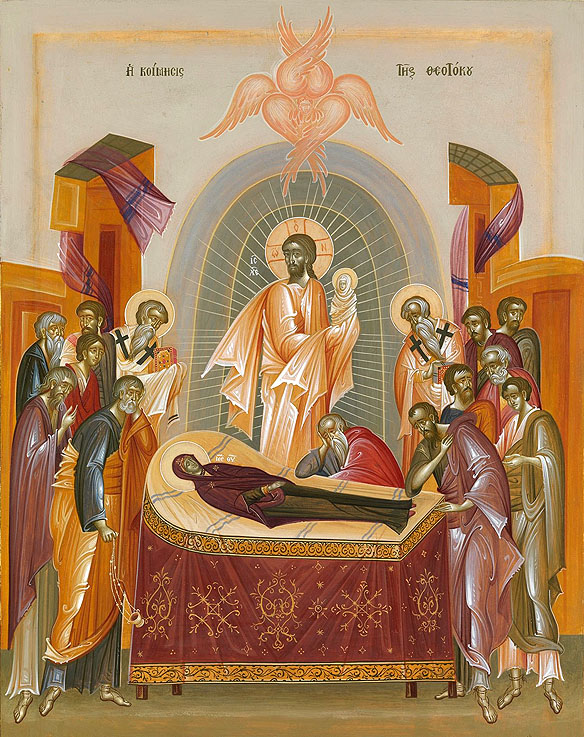 Dormition of Theotokos, by hand of Georgios Kordis, egg tempera on wood

Just as the incarnate God rose from the dead, so the holy body of His Mother was taken up into the heavenly domain. On their return from the grave, the apostles talked to Thomas, the preacher of the truth, about how he was transported on the cloud. They recalled the words of the song of the Mother of God, her miracles and her final resting in the grave. He in turn related the persecutions, the temptations and the hardships he’d suffered on his journey. He named the cities, the residents of which had come to believe through his preaching, and also told them what he saw when he was taken up in the cloud. He told them all of this. Then they went to eat and thereafter began to elevate the portion which had been placed in honour of Christ the Saviour.

When the deacon who was performing this rite took this bread in his hands, he raised it and said ‘Great is the name’ and the apostles replied ‘of the Holy Trinity’. And when he said ‘Glory to you our God glory to you’- oh, how ineffable and delightful are Your mysteries, Christ our King, through which you perform miracles! Wishing to satisfy the great desire of the Apostle Thomas to see the All Holy and Ever-Virgin Mother of God, You allowed him to see You and Your holy Mother, all the heavenly powers and all those who had fallen asleep throughout the ages ascending from earth to heaven. The apostles gazed in terror at Our Lady and her Only-Begotten Son. And instead of saying ‘Glory to You, our God, glory to You’, they exclaimed ‘Most Holy Mother of God, help us!’ And other apostles shouted ‘Through her intercessions, God, have mercy upon us and save us!’ Since then, this elevation of the ‘Panayia’, Our Most Holy Lady, has been celebrated in commemoration of the Mother of God herself.

And so we celebrate the elevation of the ‘Panagia’ when we rise from the table, for the sanctifying of our souls and bodies. Who can praise in an appropriate way her innumerable miracles, which are still being performed to this day? Were we able to concentrate the eloquence of all orators into one mouth and a single voice, we still wouldn’t be able to find a way to tell the secrets of her wonders, which she performs on land and sea: illnesses disappear, demons are put to flight, prisoners are liberated from bitter enslavement, the down-trodden are freed from the misery that oppresses them. And from what I’ve seen and heard, anyone who raises a finger, a stone, or some plant in her memory and her name receives the same deliverance from tribulations as the person who elevates the bread in honour of the Ever-Virgin Mary, the Mother of God.

Her Son, our Lord Jesus Christ, took the bread in His hands and said ‘Take, eat; this is my body’ and ‘do this in remembrance of me’. Christ is the head, which is why those who partake of His great mystery, if they receive it worthily, will receive His glory and become gods by grace.

Those who instituted the sacraments were pleased to confirm that, because of this bread which is elevated in honour of the holy name of the Mother of God, we should be delivered from every evil and should partake of her holy body. And, thanks to her protection, that we should be delivered from eternal torments and be counted worthy of the eternal blessings, through her prayers and those of all the saints throughout the ages. Amen.