Who is the devil and how does he act?

Holy Scripture tells us that the devil is ‘fallen Lucifer’.  This is why the Lord says: ‘I saw Satan falling like lightning from heaven’ (Luke 10, 18). He’s the leader, the general of the order of angels who fell from heaven when they wanted to rebel against the divine will. Then they were automatically put to flight and fell from their office and position. At the same time, they lost the stunning, radiant beauty of their form. They became such grisly monsters that the mere recollection of them is repellent. In the diabolical hypostasis there’s nothing good, blessed, just, straightforward, rational or true.

Through his rebellion against God, the devil,  who was once the bearer of the light of righteousness, love and sanctification, was suddenly transformed into the consummate instrument of darkness, hatred, untruth, utter evil and everything that contributes to the ruin that is mortality and death. He became, and will remain, darkness, lies and perdition, with one ultimate aim: opposition to anything that belongs to God and all things in God’s charge, humankind in particular. He became, and will remain in perpetuity, the heir to death and the denizen of Hades, his main goal being to beguile as many people as possible and entice them to his cause. 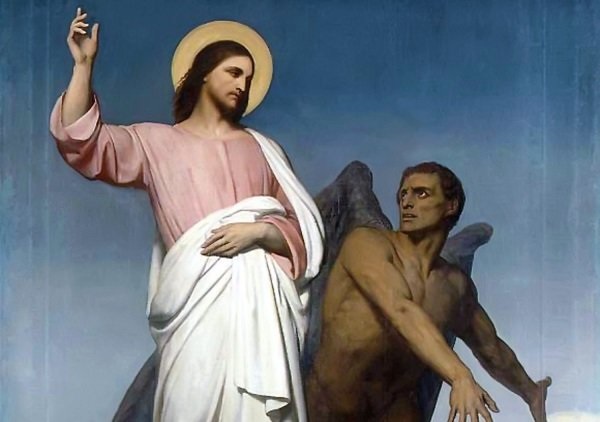 He particularly has his sights on those people who strive to become united to God. The devil cannot bear to see them ascending higher than the rank he carried before his fall, so he directs his most malignant arrows against them. He has committed homicide by intent and continues to do so.

Being mendacious, devious and evil, he doesn’t manifest himself openly. He stirs the mind with insinuations and the senses with iniquitous pretexts in order to seduce our thought and will, to entice us into assenting to his ploys. In this way he undermines his victims through duplicity, hypocrisy and deceit.

People are motivated and act mostly on the senses and emotions. The enemy knows this. This is why he stimulates the senses with seemingly-benign rationalizations and so obtains our consent more easily. He’ll argue for the biological necessity of doing something, you see. Both in the realm of the body and of the soul.

If you’re free of the passions and of bad habits, it’s not difficult to avoid the perfidy and attacks of the devil. But if you’re addicted to wicked habits, the struggle is hard and intense. If we bear in mind our goal and the divine commandments,  however, resistance is possible, since we have the grace which abides with us as an ally.

The Apostolic injunction: ‘Resist the devil and he will flee from you’ (Jas. 4, 7) is both true and certain. And ‘if a ruler’s spirit rises against you, do not leave your post’ (Eccles. 10, 4). The devil has no authority to harm us directly or perceptibly. He can tempt only through the images he projects on the screen of our mind and through notions in our intellect. We then decide for ourselves whether to accept the challenge (temptation) or to reject it. This is the main form of contact between the evil one and human beings. What then happens depends on the will of the person concerned: they will either succumb or resist.

The swiftest defence and resistance we have at our disposal is to invoke God’s help (to pray) and to recollect our goal and purpose. The example of our Lord when he was in the wilderness is the model for the practical struggle against the enemy and all things connected to him.

The devil has no ability to foresee things, nor does he know what we’re thinking. He draws conclusions from the changes in our emotions and stimulates our members and feelings accordingly, with malicious intentions. When he sees us incline towards the image, be it real or notional, that he’s projected onto our imagination, he realizes where our desires and intentions lie and brings us just the right bait to make us submissive victims.

In his nature, the devil is like the nous. He’s very quick, untiring, sleepless and unscrupulous, relentless in evil and wickedness. He changes form and shape instantaneously if it suits his nefarious purposes. He travels at great speed, to any and every place and employs any means at his disposal to achieve his main aim, which is to thwart the will of God.