Elevation of the Cross

In his first Epistle to the Corinthians, Saint Paul says that ‘the Jews seek a sign’ (1, 22). That is that they wanted a supernatural sign, such as the resurrection of the dead or cure of demoniacs, which would allow them to believe in the message of the Cross. They were looking for some supernatural sign, ignoring and discounting the signs and wonders that God had already given them in the past, every time they found themselves in any kind of danger. In fact, the sign they were seeking could not have been anything other than that of the cross, which, on the one hand, was prefigured throughout the Old Testament, and, on the other, was permanently present and saved God’s people from calamity and extinction. 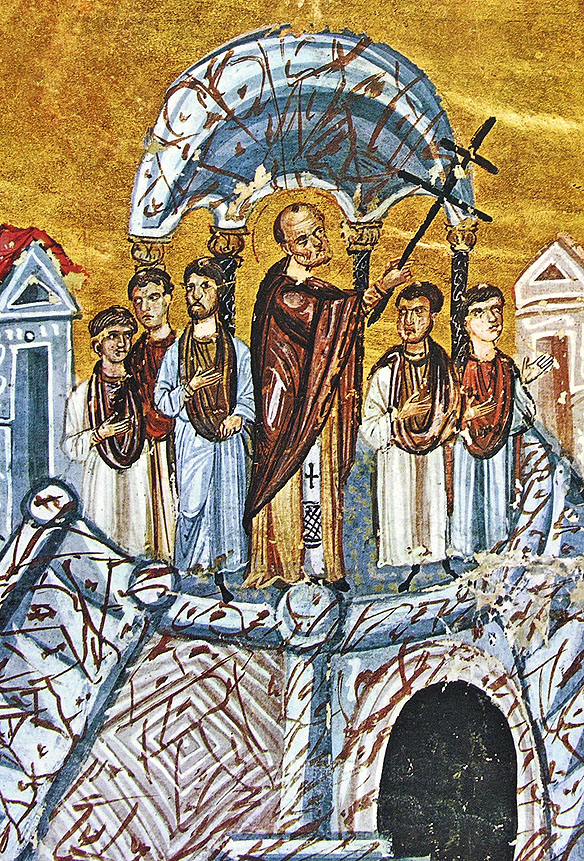 Although there are many prefigurations of the Honourable Cross in the Old Testament, we shall quote no more than six below.

The main sign of the elevation of the cross in the history of the Israelite people was that made by Moses with his rod, when he parted the waters of the Red Sea, at God’s command, so that the Israelites, who were being pursued by the Egyptians, could make their way over and be saved. When this had been achieved, he had the waters return to their original position (Ex. 14, 1-31). This is why the hymns of the Church for the feast of the Elevation of the Cross say: ‘Signing a cross with his rod, Moses immediately parted the Red Sea, for Israel on foot’ (Irmos, Ode 1, of the Mattins Canon).

When the Israelites had reached Rephidim, Moses made the sign of the cross twice. The first was when he struck a rock with his staff to produce water to quench the thirst of the people; and the second when he raised his arms and his rod to the heavens in prayer, in order to fortify the Israelites against the Amalekites, who were fighting them (Ex. 17, 1-16). According to Saint Gregory Palamas (P.G. 133-6), it was the sign of the cross which strengthened the Israelite warriors and encouraged them to victory, while, according to Theodoritos of Kyros, apart from being a sign of the cross, this action was also a prefiguration of the crucified Lord (P.G. 80, 260-1).

Moses prefigured this sacred sign on another occasion, when he led the people of Israel  into Edom. The people lost heart and their faith in God, with the result that He sent deadly poisonous snakes to bite them, which resulted in many deaths. When they had repented, the Lord ordered Moses to make a snake of bronze and to raise it on a pole, so that anyone looking at it would immediately be cured (Num. 21, 4-9). The Bible text does not offer a detailed description of the manner of the affixation of the bronze serpent, but Saint Gregory Palamas gives a very clear picture, observing that Moses raised the snake transversely on a vertical pole, thus forming the arms of a cross (P.G. 133-6). Besides, Jesus Christ Himself, according to the narrative of Saint John’s Gospel, is presented as foretelling His death on the Cross, which He likens to this event, saying : ‘Just as Moses elevated the serpent in the desert, so, too, must the Son of Man be elevated’ (3, 14).

The sign of the cross also saved the Old Testament prophets Daniel and the three young men, Hananiah, Mishael and Azariah [renamed Shadrach, Meschach and Abednego in captivity in  Babylon]. When the three young men were thrown into the fiery furnace they were saved by being raised, thanks to miraculous divine intervention (Dan. 3, 23), just as the prophet Daniel was saved in the same way when he was cast into the lions’ den (Dan. 6, 23).

It is true that, in these instances, the Bible text does not tell us exactly how the three young men and Daniel were actually saved, but Andrew of Crete tells us that this happened because they made the sign of the cross when they raised their arms to the heavens (P.G. 97, 1040-1). The same tradition is preserved in the hymns of the Church, where, on the Sunday of the Veneration of the Cross, we sing: ‘once when Daniel , great among the prophets, stretched out his arms like a cross, having been cast into the lion’s den, he was saved unharmed from being devoured by them’ (Ode 8, Canon for Mattins).

In the Old Testament, it is not only the Cross of Christ that is prefigured, but other events, such as the Nativity, the Passion and the Resurrection of Christ. But the Cross of Christ is the means by which Christ was glorified, by which He vanquished the ancient enemy, defeated death and, through His resurrection brought us into a state of life where we are liberated from the shackles of death and corruption.

Before the time of Christ, the cross was a symbol of shame and death, because, according to the ordinances of Deuteronomy, anyone dying on a cross was considered accursed (21, 23). But with the crucifixion of Christ, it became a symbol of victory over death, a symbol of glory and majesty. The cross lost its reputation for degradation, desolation, vilification and humiliation and instead became an expression of sanctity, benefaction, honour, glory and majesty.

But how did this radical change, this transformation come about? Naturally, with the incarnation of the Son and Word of God, when ‘the Word became flesh’ (Jn.  1, 14), and with His crucifixion, through which ‘He died for our sakes’ (Rom. 5, 8); ‘being found in human form, he humbled himself and became obedient to the point of death, and, indeed, death on the cross’; redeeming ‘us from the curse of the law by becoming a curse for us’ (Gal. 3, 13).

The Cross and Resurrection of Christ opened the way to Paradise, they extinguished the flaming sword which barred the way to the tree of life (Gen. 3, 24). If we look at the hymns for the feast of the Veneration of the Cross we will see the garland of praise woven by the writer for the Lord’s Cross, which he calls ‘the custodian of the gate of Paradise’, ‘the victory of kings’, ‘the boast of priests’, ‘the support of the faithful’, ‘the guardian of the world’, ‘the glory and boast of the Church’, ‘the much-sung boast of Christians’, ‘the bounteous message of the Apostles’, ‘the diadem of the martyrs’, and ‘the most precious adornment of the prophets’ (Vespers for the Sunday of the Veneration of the Cross).