‘Let your speech always be gracious, seasoned with salt’

February 1988. In Karyes [capital of the Holy Mountain] it was quite cold. It’s quite a long way above sea-level and it has high humidity, which makes things worse. That day, though, the weather was dry. There was even a light breeze to enjoy, provided you were well wrapped up. It was early evening. The sun had just gone down behind the mountain. Fr. Païsios and I were walking along the path. On the way we bumped into Fr. Kallinikos, from the Skete of Koutloumousi.

We got to his little wooden bridge. All around there were hazelnut trees without leaves. Just bare branches. 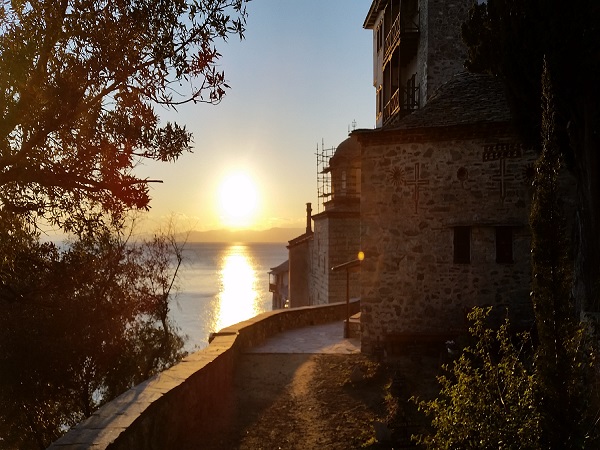 Further on, about sixty meters away, there was the gate to his yard and something brightly-colored just outside it; it may have been orange. From that distance it was impossible to make out anything more.

We were there in no time. And we found a large plastic bag, orange in color, full of mandarins. How had he seen them? How had he known they were mandarins, not oranges?  The bag was orange, but it could just as easily have had apples in it.

‘I love mandarins’, the Elder said, with obviously pretend greediness. ‘I’ll keep three for myself… No, better make it five… Or, since I’ve got the chance, I’ll take seven’, he said with a delighted smile and then stopped. ‘Fr. Kallinikos, take the rest over the road to Elder Iosif’. Iosif was an ancient monk, 103 years old, at the Skete of Koutloumousi, who still worked in his garden every day.

Fr. Kallinikos asked for his blessing and left. Fr. Païsios and I went into his house. We sat in a cell and he asked me to read some of his hand-written texts. About twenty minutes went by and there was a knock on the gate of the yard. Some people had come to see him.

We continued reading. In a little while, there was another knock.

Instead of a curtain, there was a piece of sheet at his window. ‘Peep out, so that they don’t see you and tell me how many there are’, he said.

‘I can’t count them. They aren’t all visible’.

‘What, can’t you even do sums? What were you doing all those years in America? We’ll wait. They’ll knock again’.

And, a few minutes later, that’s what they did- for the third time. ‘I’ll try and count them this time. I may not have finished Elementary School, but I’ll manage’. He got up and opened the door.

‘What’s up, boys? What are you doing here at this time? What did you come for?’.

‘Father, we wanted to see you for a while. Is that possible?’.

‘Yes, you can see me. But what are we going to give you? How many of you are there? Let me count: one, two… seven’. Let’s see what’s in the shop at this time of day’.

He went into the back and returned with the seven mandarins.

‘What an amazing person’, I thought to myself in wonder. ‘How did he know to keep the mandarins? Did he know in advance? Did God enlighten him without him realizing?’.

‘Where are you from, boys?’ he asked out of interest.

‘We’re from Athens, but Bruce and John are from America’.

‘From America? But if we give them a mandarin, they’ll make us a laughing-stock everywhere. Let’s find something American in the supermarket’.

He disappeared again and came back with some American biscuits and a tin of different kinds of Planters nuts, the most famous brand in America. They were surprised and expressed their amazement and admiration.

‘Father, what does the talanto symbolize that they strike at monasteries?’ [The talanto is the wooden instrument used to tell the community that a service is about to begin.]

‘I don’t know what it symbolizes. And it’s not important either. What matters isn’t striking the talanto of the monastery, but to multiply the talent from God*. Listen. Since it’s late, you’d better be going. I just want to say one thing: the problem with Americans is that, in English you always write ‘I’ with a capital letter, whereas here in Greece we sometimes write ‘ego’ with a small one’.

They laughed at the lovely observation and the Americans asked: ‘What does that mean? What should we do?’.

‘Delete ‘I’ from your vocabulary. Egotism is our great enemy. All of us, without exception, have to fight against it’.

Sanctity has a dignity, a refinement, a grace about it. He didn’t speak in philosophical or theological terms, nor did he make extraordinary revelations. But he filled everybody’s heart. He had discreet foreknowledge, he hid his gift, he politely served treats to his guests, he was beautifully original in his manner, he edified with his words and brought relief with his presence. With him, you were illumined, happy, at peace. You felt like Mary ‘at Jesus’ feet’. Like the Apostles on the holy mountain of the Transfiguration, you didn’t want to leave, no matter what.

*Another of Saint Païsios’ famous puns. ‘Talanto’ and ‘talent’ are the same word in Greek. My family and I were fortunate enough to be acquainted with the saint and his conversation was always lively. He was especially fond of playing with words to make a serious point. He once said, for example, that ‘the canons of the Church shouldn’t be used to shoot the faithful’[WJL].