Our Means of Salvation

As we prepare to celebrate the great feast of the Universal Elevation of the Precious and Life-Giving Cross, which, according to the liturgical tradition of the Church is comparable to Holy and Great Friday- hence its status as a strict fast- the Gospel reading of the day reminds us of another strange elevation which happened centuries before, in the wilderness, during the exodus of the Israelite people from their enslavement in Egypt. What happened then?

Since the Jews were unable to pass through the kingdom of Edom, they were forced to make a detour through a region which was arid and inhospitable. In their usual way, they once again began to complain and moan about Moses and, indirectly, about God. They said that he’d taken them out of Egypt only so that they could leave their bones in the wilderness. Even though they had manna for food, and were, therefore, clearly under the protection of God, they showed great ingratitude and called it insipid and insubstantial. Because of their behavior, God released poisonous snakes on them, which led to the death of many. But after forty years of wandering around in the desert, and with the experience they had of their relationship with God, the Israelites knew what they had to do in order to turn aside God’s wrath. They sought divine mercy and God commanded Moses to make a bronze serpent, to fix it horizontally onto a post and to set up this prototype cross in the middle of the camp. If an Israelite was bitten by a snake, all they had to do was to look at the elevated bronze snake with faith in God and they’d be safe; they would survive the deadly bite. It wasn’t the bronze serpent that saved them, but obedience to God and their faith in him. 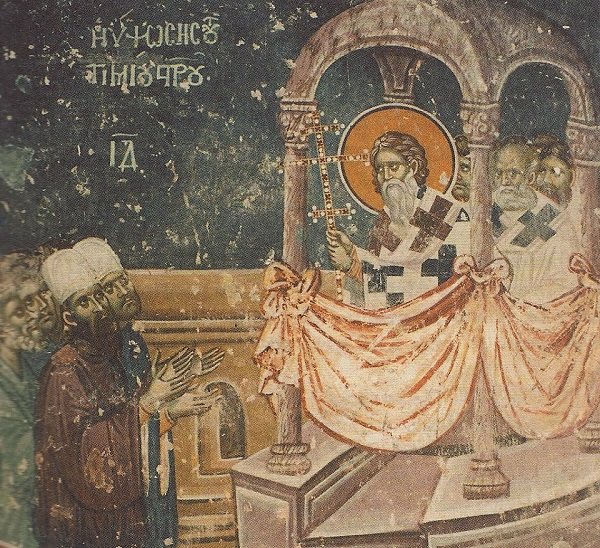 The serpent as a model of human nature
In the Holy Scriptures in general, the serpent is seen as the personification of evil. So why did God command that a bronze serpent be raised up in the desert? With its duplicitous words, the venomous snake brought about the fall of our first ancestors and therefore poisoned our human nature with sin and its consequences. The bronze serpent, on the other hand, which had no poison, saved people from the repercussions of their sins. In their interpretation of this, the Fathers say that, by the same token, it was necessary for a human person to be found who had no sin, so that he could be raised and could save all who gazed upon him. And the only sinless one is our Lord, Jesus Christ. So he had to be raised on the Cross, ‘free of the poison of sin’, in order to redeem us from the noxious effects of sin and to offer the salvific results of holiness to all those who gaze upon him with faith.

St. John Chrysostom explains: ‘The Jews also escaped death back then, but only for a time; now, those who believe escape eternal death. There, a suspended serpent cured snake bites, but here, Christ Crucified cures the wounds from the metaphysical dragon, the devil. There, those who looked with the eyes of their body were cured; here, those who look with the eyes of their soul soar above any sin they’ve committed. There a snake bit and a snake cured; here death overcame (the Crucifixion), and death saved’. In other words, just as the bronze serpent was a likeness of snakes, though without the poison, so Christ, who shares our human nature, is without the ‘poison of sin’. And, as those who gazed upon the elevated likeness of the serpent were saved, so those who are ravaged by the poison of sin overcome death and live eternally, provided they gaze with faith upon the Passion of the Savior.

The ‘anomaly’ of the elevation of the Life-Giving Cross
If there’s such powerful symbolism between the elevation of the bronze serpent and the Crucifixion, why, on the day of the feast, is the body of Christ not on the Cross which is elevated? Purely for historical reasons? Because this is how it was elevated when it was discovered by Saint Helen or when it was regained by the Emperor Heraclitus after the only true crusade known to history, when he fought the Persians who had stolen it?

No. The reason why the Cross is elevated without him who was raised and died upon it is simple. It is the fact that, even though Christ was, indeed, raised upon the Cross, the effects of the Cross on him weren’t permanent. In other words, the event of the death of Christ on the Cross, no matter how salvific the result was for humanity, can’t be compared to the triumph of the Resurrection. First and foremost, the Church wishes to stress particularly the place of its primary, paramount feast, the Resurrection. So, a vacated Cross is elevated, because he who suffered on it has risen. The Cross doesn’t exist and isn’t honored as an instrument of death, but as a symbol of the Resurrection. And its power is due not only to the fact that the Savior shed his blood on it, but mainly because it was there that he demonstrated that he is Lord over life and death: both when, of his own will, he gave up his spirit; and also when, by himself and through his Resurrection, he overturned the effects of death, preserving freedom, salvation and sanctity for us.