The Birth of the Mother of God: the Beginning of our Salvation

Our Church is celebrating the feast of the Birth of the Mother of God, who bore the Son and Word of God, who is the beginning of the salvation of the human race: ‘rejoice, Virgin all-holy, the beginning of the human race’. Today’s feast of the Mother of God is a cause of universal rejoicing, thanks to the all-pure and blessed person of Our Lady. The feast is a harbinger of joy, because from the Virgin rose the Sun of Righteousness, Christ, the Savior and Redeemer of the World.

The parents of the Mother of God were Joachim and Ann. Both of them belonged to the root and lineage of David and were devout and righteous people. They’d grown old, however, without having had any children, and this saddened them. They implored God for many years to grant them a child and promised that, should he do so, the child would be dedicated to him. It should be mentioned that, at that time, being childless was a curse and stigma for a married couple, who were derided by the whole of society. The priests didn’t even accept the gifts such couples brought to the temple of God, because of the lack of offspring. In this instance, God rewarded the prayers and deep piety of Joachim and Ann. Through the Archangel Michael, he announced that the barren and sterile Ann would give birth to a holy child. They thus proved to be true benefactors of the human race, since they also contributed to the salvation of the world. The Birth of the Mother of God was a gift from God to them, commensurate with their virtue. 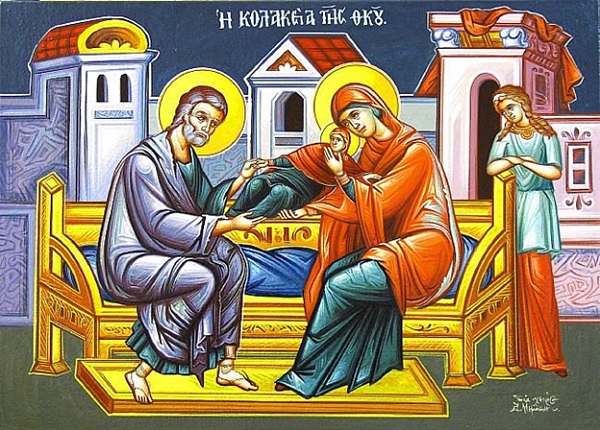 We celebrate a two-fold miracle today. The first is that the barren gates of elderly Ann are opened and the Incorrupt Virgin is born. The second is that the closed gate of Eden is opened, the gate which was sealed because of the disobedience of our first ancestors, Adam and Eve. It opens because God wished to show that he was well-pleased with the couple, Joachim and Ann, and that he wasn’t simply giving them the fruit of the womb they so desired and had prayed for, but was also giving them the maiden who would open the path to God for us, as well.

Today, joy has come to the human race. We hear this in the Dismissal Hymn for the feast. But what is this joy which the Church celebrates? Certainly not joy which we as people normally understand it. For us, today’s joy isn’t an emotion we feel, it isn’t enjoyment. It’s a gift from heaven, the fruit of the Holy Spirit. Joy is related to grace. Grace is the gifts God bestows on us and which save us, bring us into heaven. Joy, then, is a gift of God to us.

On the occasion of today’s feast, Saint John the Damascan, weaves an encomium to the person of the Mother of God, saying: ‘today the gates of sterility are opened and a divine, virginal portal is presented, from whom God will pass and enter the world “bodily”. God who is beyond all beings, according to Saint Paul, who heard the “inexpressible mysteries”’.

The Virgin Mary is our most precious offering to God, made so that he could effect and instigate our salvation. She is the guarantee of salvation and of our perfection in Christ. Through her birth, Our Most Holy Lady opened the way for the incarnation of the Son and Word of God and, by extension, started the work of the salvation of the human race. Through her birth, Our Lady loosed the bonds of sterility, both for her parents and also for the whole of the human race. As an affectionate mother, she tends people’s problems and pain and is constantly working wonders through her protection. As a faithful people, we have no other hope but Our Most Holy Lady.

Our Lady is Broader than the Heavens; she is the Intercessor at the frontier between the created and the uncreated. She receives our prayers and takes them to the throne of her Son, Our Lord Jesus Christ. The Virgin Mary is the offering of the race of mortals to the Triune God. She’s already a citizen of the kingdom of heaven and sits alongside the throne of God, interceding for our salvation.

Our Most Holy Lady, the Mother of God, is living dogma, that is a living, firm principle which is beyond all doubt, because of the informed theology concerning her which is accepted by all the Fathers and by the Universal Church as a whole.

The righteous forefathers of God, Joachim and Ann, showed faith and patience. They were convinced that their prayers would be answered and that God would fulfil the pledge they’d made to him. We’re called upon to learn from the example of the righteous forefathers, without complaining, without moaning, never ceasing to invoke God every moment of our lives. What adamantine patience and fortitude the two elderly parents showed. They never ceased to pray and to plead with God, until he gave them his inexpressible, inestimable gift. May we also demonstrate uncomplaining patience in the sorrows and tribulations which God allows for our own spiritual benefit.