The Cross is a Reminder of Christ

The Elevation of the Precious Cross belongs to the feasts of the Lord. It centers on the person of Christ, because the Cross became ‘the sign of the Son of Man’.

Once Christ had determined that the means of his voluntary Passion would be death on the cross, the tree of dishonor, which until then had been held in disdain, was transformed into the most glorious trophy and his honored symbol.

At the Second Coming, when Christ will come again, ‘on the clouds of heaven and in great power and glory’, his Cross will be the first thing that shows in the sky (Matth, 24, 30). And even afterwards, it will accompany him, inseparable, in endless eternity. From the time of his Crucifixion onwards, the Cross has been a directly definitive element of Christ’s identity. It always reminds us that ‘he was crucified for us’. It’s inevitably a reference to him. 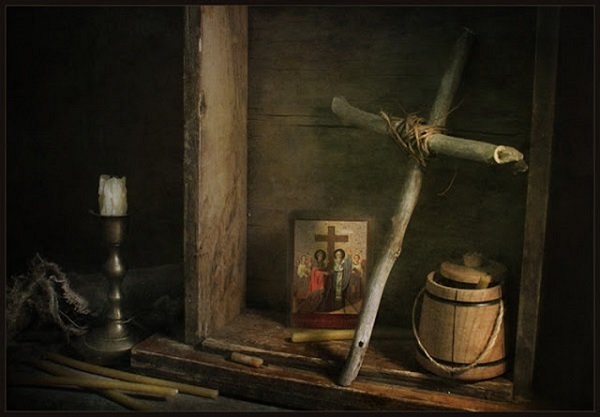 So when the minster of God begins the service of the Preparation, he elevates the blessed loaf and makes the sign of the Cross in the air. Thereafter he again seals the loaf with the sign of the Cross, passing the holy spear three times over the seal of the lamb and saying each time: ‘In remembrance of our Lord and God and Savior, Jesus Christ’. The Cross is always a reminder of Christ. The offer of the bloodless sacrifice always takes place so that we may remember Christ.

These are the words which the Lord himself spoke to us at the first eucharistic assembly, in the upper room in Jerusalem, when he himself performed the first Holy Communion, the Last Supper. It was the last legacy he left to his disciples just before his appalling betrayal and arrest. At that time, the Lord didn’t speak of the great works which had preceded or were to follow; he spoke only of his impending lifegiving and horrendous Passion. He blessed the bread and wine and invited his disciples to partake. ‘Eat, drink’, this is my body which, for your sake will become your true nourishment. It will be slaughtered and dismembered. ‘All of you drink of this’, this is my blood which is shed for the salvation of you all. And he added, ‘Do this in remembrance of me’ (Luke 22, 19;  cf. 1 Cor. 11, 23-26).

‘But what is this remembrance? How can we remember the Lord at the Liturgy and what should we tell about him? Maybe the things that proved he’s our all-powerful God: that he raised the dead, gave sight to the blind, commanded the winds to cease, fed thousands of people with a few loaves? No. Christ didn’t ask us to remember these things, but rather those that proved weakness, that is, the crucifixion, the passion, his death. Because the passion was more necessary than the miracles. It’s the passion which brings us the resurrection and our salvation, whereas his miracles merely prove that he’s the true Savior’ (Saint Nikolaos Kavasilas).

Christ wants us to remember his death on the cross with gratitude, because this is what has saved us. Above all else, the Divine Liturgy is remembrance and confession of his death on the cross. Saint Paul is categorical: ‘For as often as you eat this bread and drink this cup, you proclaim the Lord’s death till He comes’ (1 Cor. 11, 26).

Let us never cease to commemorate his death on the cross, the Divine Liturgy on earth, the remembrance of Christ, until he comes again.