The Elevation of the Precious Cross

The Lord’s Precious Cross is the supreme symbol of sacrifice and sanctification for the Church of Christ, Who was crucified and then rose, because the Cross, together with the Resurrection, are the two pillars which support the life for the Church and its members.

The honour paid by the Orthodox Church to the Precious Cross on 14 September (though not only on that day) began in the very first, Apostolic years, through the Apostles themselves and the Fathers who followed them. Today, the Orthodox Church preserves intact the Biblical (Old Testament and New) and Patristic teaching and accords the Cross of Christ due honour as the outstanding instrument and symbol of the redemption of the human race. 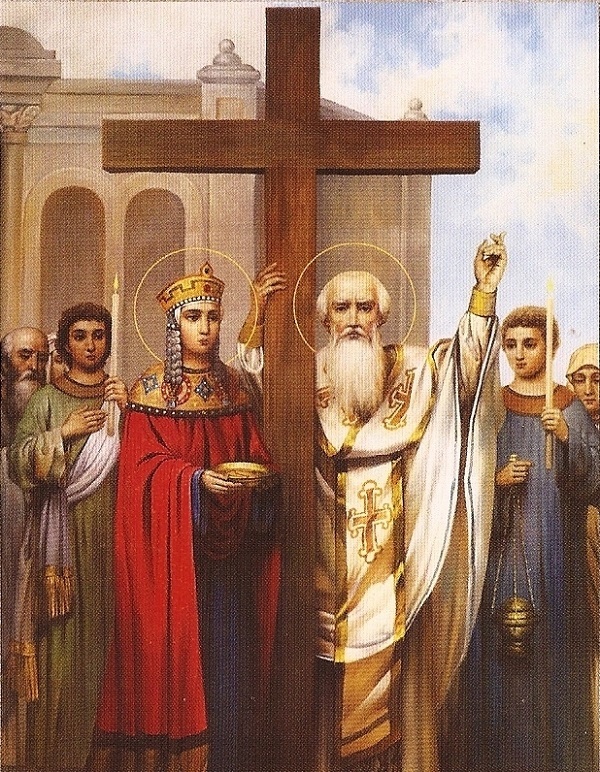 In 326, after the 1st Ecumenical Synod, Helen, the mother of Constantine the Great, went to the Holy Land, where she began the construction of fine churches in those places at which, according to tradition, events linked to the presence of the Lord on earth and other Biblical occurrences had taken place. Central among them was the Lord’s Holy Sepulchre. During the second destruction of Jerusalem, in 135, the emperor Hadrian had built a temple to Aphrodite on this spot. He’d earthed over the sites of Golgotha and the tomb in order to prevent Christians visiting them. Saint Helen engaged in endeavours to discover the Precious Cross. After painstaking excavations, they finally found three crosses: the Lord’s and those of the robbers. Then according to Church tradition, Bishop Makarios of Jerusalem, having first said a prayer, touched the body of a dead woman with all three crosses. When the third cross, the Lord’s, was laid on her, she revived.

According to Church tradition, Saint Helen embraced the Cross immediately after its discovery and gave it over to Bishop Makarios. The news spread to all parts of Jerusalem. A whole host of believers crowded to touch the Precious Cross, but because of the sheer weight of numbers, the bishop raised the Cross on high and blessed those present with it. On the same day, we celebrate the second Elevation of the Cross, which occurred a few years later, in 335, the day after the inauguration of the church of the Resurrection.

Finally, on this same day, the Church records a third and final Elevation of the Precious Cross in the year 630. At that time, Emperor Heraclius was fighting the Persians who, 14 years previously, had conquered Palestine and made off with the Precious Cross. After Heraclius had defeated the Persians and regained the Cross, he set it up on the throne of Patriarch Zachariah, who’d been captured by the Persians. On September 14 he came to Jerusalem bearing the Cross upon his shoulders. When he reached the church of the Resurrection, he gave it over to the now restored Patriarch Zachariah, who raised it to show to the crowds and bless them. As he did so he sang ‘Lord save your people…’, the first time the troparion had been sung.

Ecclesiastical history sources mention that the feast of the Elevation was established long ago, perhaps even by Constantine the Great, at the exhortation of his mother, immediately after the discovery of the Precious Cross in Jerusalem in about 330, and in combination with the feast commemorating the inauguration of the church of the Resurrection on 13 May, in the year 335.

The Church honours the holy day of the Elevation of the Lord’s Cross in a particular way. During the Divine Liturgy, the Epistle reading concerns the importance of the Lord’s sacrifice on the Cross, while the Gospel describes scenes of the crucifixion. Moreover, the day has been declared a strict fast (without wine or oil), unless it falls on a Saturday or Sunday), because of Christ’s sacrifice, making it equal to Great Friday. 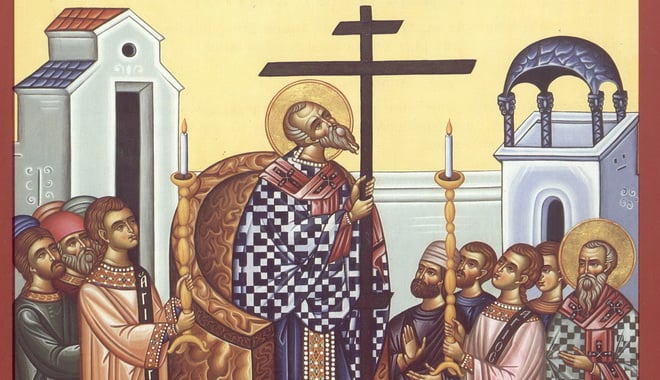 On the occasion of the discovery and elevation of the Lord’s Precious Cross, the Church shows all of us the way of life we should be leading. So that we can be crucified together with Christ and then raised. We should draw strength and grace from this. Christ’s Cross is a symbol of obedience, humility, and love, it’s the sign of victory over hatred, self-centredness, sin, the passions and egotism.

Let us also struggle, insofar as we can, to imitate Him and obey Him. Imitate His humility His obedience and also His love, which was the same for everyone, for His disciples and for those who crucified Him and which remained with Him on the Cross. Let us pass the remaining time of our life in peace and repentance.