Among the choir of the saints of the new martyrs of our Church, there are a number who are called ‘Hagarenes’*. These were Turkish Muslims who, during the time of time of Turkish rule in the Balkans, embraced Christianity and proved themselves faithful enough to undergo martyrdom.

One such is the holy new martyr, Ioannis ‘of the Hagarenes’, from Vrahori, a Turk by descent, son of a famous sheikh of Konitsa**, a dervish, who was the religious leader and teacher of the region. He was born in about 1790 in Konitsa and was named Hasan. His rich and noble father ensured that he knew the principles of Islam and he studied under the finest available Islamic scholars. He was then sent to Ioannina, where, at the age of twenty, he, too, became a dervish. Ali Pasha himself admired the gifts and abilities of the young man and he sent him to Yusuf Arapi, the governor of Aitoloakarnania, to serve at his court in Vrahori (today’s Agrinio) as a dervish. The governor welcomed him warmly, since he was a friend of Hasan’s father and put him in charge of religious affairs in the region, which involved teaching the Koran and providing support to the Muslims. 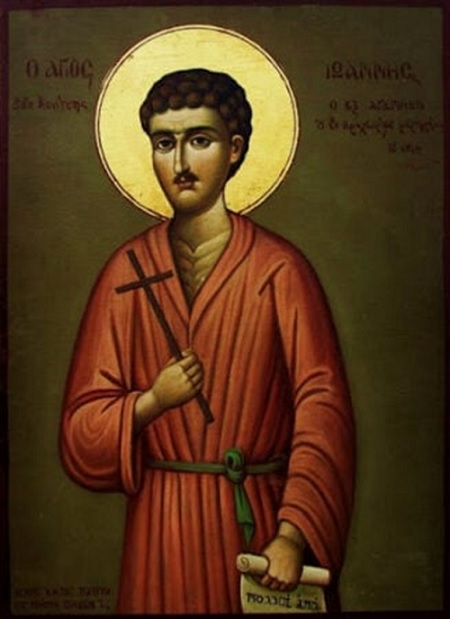 But the young dervish, Hasan, was well-disposed towards all people. He had a good heart and felt sorry for everyone, irrespective of their race or religion. His heart bled at the sight of the sufferings of the enslaved Christians and he was upset by the barbaric behavior of his compatriots. He was unable to find any justification for the teaching of the Koran concerning non-believers in Islam, who were to be punished and exterminated.

An unexpected encounter and brief discussion with a venerable Orthodox priest, outside the church of Saint Dimitrios in Agrinio, would change his life. He heard for the first time about the love of God, of which all people are recipients, without discrimination. He was astonished that the ‘infidel’ priest didn’t hate him.

After this, something changed within him. Some inexplicable force kept bringing him to the courtyard of the church. It was Great Lent when, one evening, he decided to go to the impoverished priest to learn what his teachers had concealed from him about the Christian faith. Thereafter, he followed the services of Great Week from behind a window. The sight of Christ on the Cross on Great Thursday moved him to such an extent that he took the momentous decision to renounce Islam and embrace Christianity.

He asked the priest to baptize him, but the latter feared that the inhabitants of the town might be slaughtered indiscriminately, so he advised him go somewhere else to be baptized. He therefore made his way to Ithaca, which was under Venetian control, where he was given instruction, was baptized and was given the name Ioannis. He didn’t go back to Agrinio but settled in the area of Xiromeros in the village of Fyteies, where he married a devout young woman and was hired by a land-owner, Panos Galanis, as a field warden. He spent most of the time hidden in the countryside, to prevent betrayal to the Turks. He ceaselessly praised Christ, who had enabled him to be reborn, and became a faithful follower of his. He transformed a remote cave into a chapel where he prayed to God with abundant tears of gratitude. He went into the village to attend services and to partake of the holy sacraments.

But his own family and the Turkish authorities in Vrahori were looking for him. Henchmen of his father located him. They tried to change his mind, but in vain. At the same time another Turk recognized him and reported him to the new governor of Vrahori, Suleiman Bey, as being an apostate from Islam. A police detachment arrested him and brought him to explain himself to the mayor of Vrahori, who attempted with blandishments to convince him to embrace Islam once again. But the mayor was wasting his time, because, with a serene countenance, Ioannis replied that he had found the truth he’d been seeking for years and which would bring him eternal life. What was being asked of him was opposed to the happiness he’d experienced as a believer in Christ, the true, living God. He knew, of course, that the death penalty awaited him, because this is what the Koran prescribed for those who converted from Islam.

When the mayor heard these words he became incensed, considering them a great insult. He ordered Ioannis to be locked in the dungeon, where they tortured him mercilessly, in the hope that he’d change his mind. The soldiers seized him and passed a heavy chain around his neck and fastened a great log to his feet. They scourged him cruelly, kicked him and mocked him. Ioannis endured all this with incredible fortitude for days on end. He didn’t cry out, he didn’t protest; he only prayed: ‘My God, help me’.

When the infuriated mayor saw that the tortures were having no effect, he decided to have Ioannis put to death, because he couldn’t stand any new provocation on the part of the martyr. He ordered that he be brought to the courtyard of the church of Saint Dimitrios. Beneath the huge plane tree, which survives to this day, they beheaded him, forbidding him to make the sign of the cross. It was 23 September, 1814. They also refused to allow his corpse to be buried, preferring to throw it into a neighboring piece of wasteland, for the dogs to eat. Some bold  Christians, however, managed to gain permission for him to be buried in a nearby field, on condition that there would be no Christian burial service.

Soon afterwards, despite the risks involved, they managed to take his holy relics to the historic Monastery of Prousos, where they were incorporated into the walls of the church. They were discovered in 1974. They gave off fragrance and have worked numerous miracles.

Saint Ioannis is honored richly both in his birth-place, Konitsa and in Agrinio. His holy memory is celebrated on 23 September, the day of his glorious martyrdom, 207 years ago.

* From Hagar, the ‘second wife’ of Abraham, who bore him a son called Ishmael. The latter’s descendants, the Ishmaelites, were identified with the Arabs, therefore with Islam, and ‘Hagarene’ became a general term for ‘Muslim’.

** The same town where, much later, Saint Païsios lived as a boy.