The Sign of the Cross in the Old Testament

In his first epistle to the Corinthians, Saint Paul remarks that the ‘Jews demand a sign’ (1 Cor. 1, 22), that is, they sought a supernatural sign such as the resurrection of the dead or the cure of a person possessed by demons in order to make them believe in the message of the Cross. So they sought some supernatural sign, overlooking and ignoring  all the signs and wonders that God had showed them in the past, every time they found themselves in danger. Naturally, the sign they were looking for couldn’t be anything other than the sign of the Cross which, on the one hand, is prefigured throughout the Old Testament and, on the other, was permanently present and saved the people of God from destruction and annihilation. 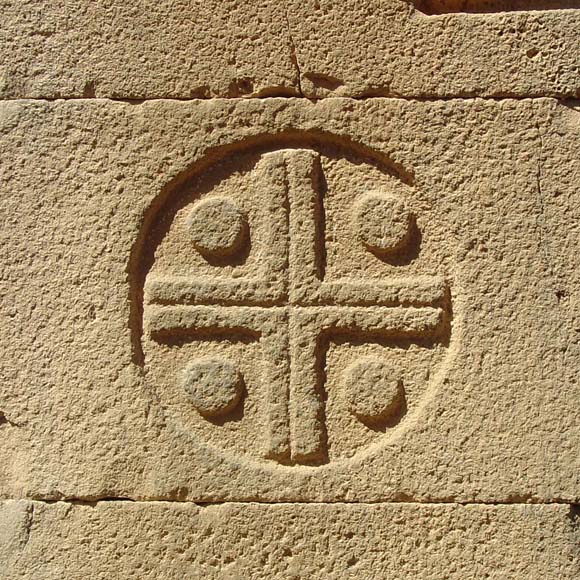 The Precious Cross is prefigured on many occasions in the Old Testament, but we shall confine ourselves to the examination of six particular ones.

The main sign of the elevation of the sign of the cross in the history of the Israelite people, is the sign made by Moses with his staff when he parted the waters of the Red Sea, at God’s command, in order to allow the passage of the Israelites, who were being pursued by the Egyptians. They were saved and later united so that they were restored to their original position (Ex. 14, 1-31) Because of this event, on the feast of the Elevation of the Precious Cross the Church sings: ‘When Moses drew the Cross with his staff, he immediately parted the Red Sea for Israel to cross on foot’ (Irmos, ode 1, Mattins canon).

Moses also prefigured this sacred sign when he led the people of Israel in Edom. The people were dispirited and lost their faith in God, with the result that God sent deadly poisonous snakes to bite them, resulting in the deaths of many. After they’d repented, the Lord commanded Moses to construct a bronze serpent and erect it on a pole, so that anyone looking at it would immediately be healed. (Num. 21, 4-9). Although the Biblical text doesn’t furnish a detailed description of the manner of the elevation of the bronze serpent, Saint Gregory Palamas paints a very clear picture. He states that Moses raised the serpent horizontally on an upright pole so that it formed the arms of a cross (P.G. 133-136). Besides, Jesus Christ himself, in the narrative in Saint John’s Gospel, is presented as foretelling his death on the cross, which he equates with the elevation of the bronze serpent in the wilderness: ‘As Moses raised  the serpent in the wilderness, so must the son of man be lifted up’ (Jn. 3, 14).

The sign of the cross also saved the Old Testament prophets, Daniel and the three young men, from extermination.

Together with the prophet Daniel, the three young men, Ananias, Azaria and Misael were active in Babylon at the time of the Babylonian captivity. When the three young men were cast into the fiery furnace, they were saved by being raised up, thanks to miraculous intervention on the part of God (Dan. 3, 23), just as the prophet Daniel was saved in the same way, in the lions’ den (Dan. 16-23).

Naturally, the Biblical text again doesn’t provide an image of the rescue of the three young men, but a picture of their salvation can be found in what Saint Andrew of Crete has to say on the subject. He states that first the three young men and then the prophet Daniel were saved because they formed the sign of the cross by raising their arms to heaven (P. G. 97, 1040-1041). The same tradition is preserved in the hymnology of the Church, where, on the Sunday of the Veneration of the Cross, we sing: ‘once, having been cast into the lions’ den, Daniel, great among the prophets, extended his arms in the form of a cross and was safely delivered from their jaws’ (ode 8, Mattins canon).

It’s not only the Cross of Christ which is prefigured in the Old testament but other events, too, such as the Nativity, the Passion and the Resurrection of the Lord. But the Cross is the means by which Christ was glorified, by which he vanquished the enemy of old, defeated death and, through the Resurrection, brought us into a new state of life, freed from the bonds of death and corruption.

Even though the cross was a symbol of abomination and death in the time before Christ, because, according to ordinances of Deuteronomy, anyone who died on the tree was considered to be cursed (Deut. 21, 23), with the crucifixion of Christ it became a symbol of the victory over death, a symbol of glory and grandeur. The cross ceased to be a form of ridicule and wretchedness, of abomination and humiliation and became instead an expression of sanctity, benefaction, honor, glory and majesty.

But how did this radical change occur, this miracle, this transformation? Naturally, through the incarnation of the Son and Word of God, when ‘the Word was made flesh’ (Jn. 1, 14) and through the his crucifixion, when ‘he died for us’ (Rom. 5, 8) ‘and being found in appearance as a man, he humbled himself by becoming obedient to death, even death on a cross’ (Phil. 2, 8), ‘redeeming us from the curse of the law by becoming accursed for our sake’ (Gal. 3, 13).

The Cross of Christ and his Resurrection opened the way to Paradise. They removed the fiery sword which obstructed the path to the tree of life. (Gen. 3, 24). If we look at the hymns of the Church, we see the encomium woven for the feast of the Veneration of the Cross, which is called: ‘the guardian of the gate of Paradise’, ‘the victory of kings’, ‘the boast of priests’, ‘the support of the faithful’, ‘the guardian of the world’, ‘the glory and boast of the Church’, ‘the much-vaunted boast of Christians’, ‘the chosen message of the Apostles’, ‘the diadem of the martyrs’ and ‘the priceless adornment of the prophets’ (Vespers, Sunday of the Veneration of the Cross).