Saint John Koukouzelis, a native of Dirrachia (now Bulgaria), was orphaned in childhood. Endowed with a very fine voice, he entered the Constantinople court school. He found favor with the emperor John Comnenos (1118-1143) and became a chief court singer. The sumptuousness and luxury of the imperial court bothered the pious youth. Once, when asked what he had eaten for dinner, he replied, “Beans and peas.” The name Koukouzelis (beans and peas) stuck with him ever after.

John began to seek ways to escape the enticements of the court, as well as a marriage arranged for him by the emperor. By the will of God, John met an igumen from Mt. Athos who had come to Constantinople on monastery business. John revealed to the Elder his desire to leave the court. The Elder blessed John to come to the Holy Mountain. There John was accepted and tonsured a monk.

He was given the obedience of tending the monastery’s flock of goats. He took the flock to remote areas of the Holy Mountain to graze. There, in the wilderness, the youth was able to to pray, contemplate God, and sing the divine hymns in solitude. Charmed by the angelic beauty of his voice, the animals gathered around him and listened as though entranced.

Out of modesty and humility the singer did not reveal his gift to the brethren. But once, a wilderness dweller overheard his moving pastoral song and informed the igumen. St John then revealed to the igumen that he had been a court singer. He tearfully implored him to remain in the wilderness with his flock.

The igumen was afraid that the emperor would find out that his favorite court singer was on the Holy Mountain and force him to return to court. Wishing to avoid the emperor’s displeasure the igumen journeyed to Constantinople to explain what had become of John and begged him not to hinder the young man from his salvific path. 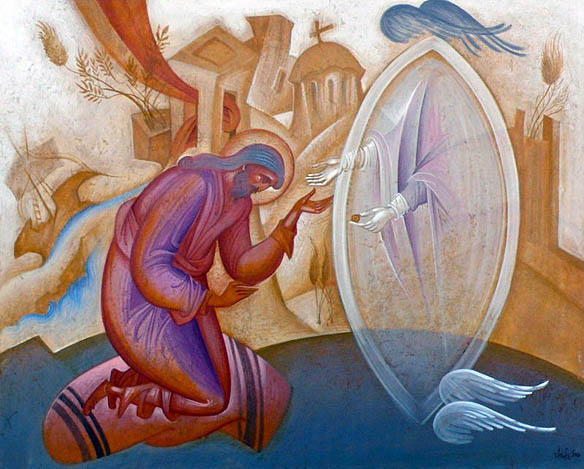 The Vision of Saint John Koukouzelis by Georgios Kordis, tempera on wood

Thereafter John Koukouzelis sang on the right cleros in the cathedral on Sundays and feastdays. Once, after singing an Akathist before an icon of the Mother of God, John was granted a great mercy. The Mother of God appeared to him in a dream and said, “Rejoice, John, and do not cease to sing. For that, I shall not forsake you.” With these works she placed into John’s hand a golden coin, then became invisible. This coin was placed beneath the icon. Many miracles have been credited to the coin and the icon. The icon, named the “Koukouzelissa” in memory of St John is located in the Lavra monastery of St Athanasius. It is commemorated on October 1, and on the 10th Friday after Pascha. 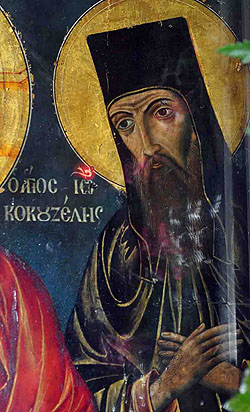 The Mother of God appeared again to St. John and healed him of a grievous affliction of his legs, caused by the long standing in church. St John’s remaining days were spent in intense ascetic efforts. He also worked hard on the discipline of church singing, gaining the title of both master teacher and regent (overseer).

He arranged and compiled melodies for church stichera verses, troparia and kontakia. He edited texts of hymns and wrote his own troparia. Some of his compositions are also in the following manuscripts: “A Book, by the Will of God Encompassing All the Order of Progression of Church Services, Compiled by Master Teacher John Koukouzelis,” “Progression of Services, Compiled by Master Teacher John Koukouzelis, “From the Beginning of Great Vespers through to the Completion of the Divine Liturgy,” and “The Science of Song and Singing Signs with all the Legitimate Hand-Placement and with all the Arrangements of Song.”

Foreseeing the hour of his death, St John took his leave of the brethren, and in his last wishes bade them to bury him in the Church of the Archangel that he built. Church singers reverence St John Koukouzelis as their own special patron saint.