Sunday of the Fathers of the 7th Ecumenical Synod (787)

‘The holy and ecumenical seventh synod took place in Nicaea in Bithynia (787). This was the second synod in Nicaea, after the Fathers of the 1st Synod convened there in 325,  during the reign of Emperor Constantine and his mother Helen. The Patriarchs present or represented at the 7th Synod were Hadrian (Rome), Tarasios (Constantinople), Politianos (Alexandria), Theodoritos (Antioch) and Ilias (Jerusalem) and the Fathers who convened there numbered three hundred and sixty-five. They all came together against the iconoclasts and anathematized in writing every heresy, as well as all the heresiarchs, and then all the iconoclasts. They set out in writing and recorded that those who do not venerate the holy icons are strangers to the faith of the Orthodox, that honor paid to the icon is directed towards the original and that those who venerate and honor the icon are venerating the person depicted. Then having arranged matters in this way and reinforced the Orthodox faith, each departed for his own see’. 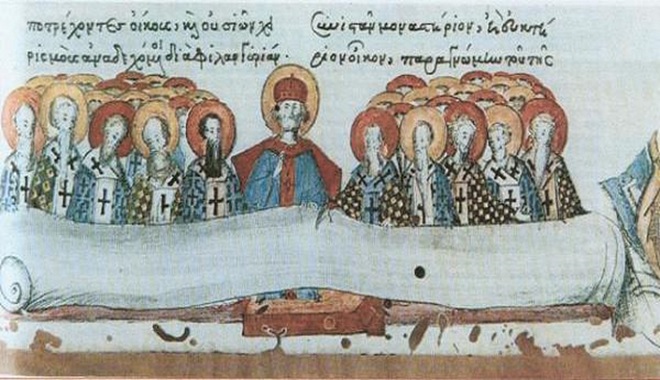 We should begin by recalling that the Ecumenical Synods are the highest and most important instrument which the Church of Christ has at its disposal in order express and formulate its faith and life; to condemn every effort to alter its faith and life, i.e. heresy; and, naturally, to define the practical framework for charting its course. When a heresy arises, of course, this is an opportunity to express the faith, since it is now at risk. This shows that although the ecumenical is an established institution, it can also constitute an exceptional and charismatic event. Expression of the faith is achieved through terms and dogma, while the definition of the practical frameworks of its life is provided through the canons. In other words, an ecumenical synod is the mouth of the Church, which is why its resolutions are binding for every member thereof. This means that, through the obedience of the member, communion with the Church is preserved and, by extension, communion with Christ himself and his holy apostles. Because, of course, the task of the Fathers who constitute an ecumenical synod is how to present that the Church is alive: Christ and his Spirit. When the faithful see that the Synod hasn’t expressed the teaching of the apostles, then they rebel and reject obedience. In this sense it can be said that the faithful are, in the end, the guardians of the Orthodox faith.

The hymnographer records the following truth about the Fathers of the 7th Ecumenical Synod: ‘Holy Fathers, you have become the precise guardians of the apostolic traditions’. Their task was how to remain within the precision of the Apostolic tradition and that of the Fathers before them. This is why the first thing they did at the  synod was, in their turn, to condemn Arius, Makedonios, Nestorius, Eutyches and the other earlier heresiarchs. ‘For expressing the Orthodox dogma on the consubstantiality of the Holy Trinity, you roundly condemned blasphemous Arius. Then rebuking Makedonios, the Spirit-denier, you also rebuked Nestorios, Eutyches and Dioskoros, Sabellius and Severus, as well as Acephalus’. It is perfectly clear from this that certain hymns are precise repetitions of the service of the Fathers of the 1st Ecumenical Synod. On first hearing, you think it’s a mistake: ‘Assembling the whole knowledge of the soul, and having convened in the divine Spirit, the venerable Fathers defined the heavenly and holy Creed, as written by God’. And yet. Such was the conviction that the Fathers of the 7th Synod were in complete alignment with those of the 1st that it was as if the present was extinguished and the past was being heard as if it were the present. This is the identity of the faith of all the Fathers at its zenith.

What was the heresy which was condemned by the 7th Ecumenical Synod and which encapsulated all the previous heresies? Iconoclasm, the opposition to icons, that is the rejection of the possibility of depicting Christ. Because this rejection meant that Christ was not really a true human person, he merely appeared to be so. This meant that iconoclasm perpetuated Monophytism, or from another point of view Nestorianism, by another means. In other words, at bottom iconoclasm was a Christological heresy. The  hostility towards the icons seemed reasonable: not falling into idolatry. But this hostility was, in essence, denial of Christ, which means that the acceptance of the icons of Christ constituted the most resounding affirmation of faith in his incarnation. ‘Therefore holding fast to the true faith, the Church embraces the icon of Christ’s incarnation’. Naturally, this means that the depiction of Christ was related to his describable human nature, not his divine nature. His divine nature certainly can’t be depicted, which is why no portrayal of the Holy Trinity can be countenanced within the Orthodox context. The holy Synod also recalled the words of Saint Basil the Great, which were used by Saint John the Damascan, the theologian of icons, that ‘the honor accorded to the icon passes on to the original’. This is to emphasize that the wood or the colors of the icon aren’t honored, but the person depicted. And it goes without saying that icons of the Mother of God and the saints are also acceptable, since they’re the foremost friends of Christ and therefore, in honoring them, we’re ultimately honoring Christ.