The Pain that Leads to Joy

The ‘forgive me’ which comes from a heart in pain over a mistake breaks down the hard wall of remoteness, of animosity, and unites that which was divided. This is why it’s neither easy nor painless. Because the easy and painless ‘forgive me’, expressed as a formula for restoring relations on a superficial level, isn’t capable of breaking down walls.

There’s ‘forgive me’ to God and to other people, to our neighbor. In reality, it’s one and the same, since according to the Fathers, ‘if you sin against your brother or sister, it’s as if you sin against God’. Or, as Abba Apollo puts it: ‘If you’ve seen your brother or sister, you’ve seen God’. The excuse that ‘Things are fine between us and God’ and that our relationship with other people is entirely different, seems like an attempt to silence our conscience, which is crying out the truth. 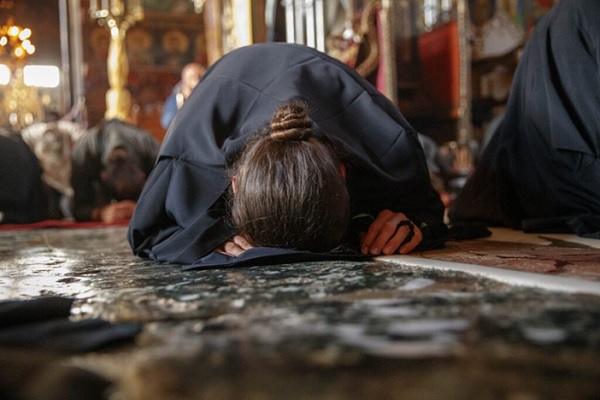 Of course, sin, as estrangement from God’s grace, as abandonment of his presence, as dissolute ways of life at odds with his will, creates turmoil within those who have experienced his peace and his joy. In the same way as quarrels, suspicions, clashes and accusations among people we love and are close to create tumult, sorrow and anger in our heart and mind.

In reality, there’s no other way of finding peace and of filling our being with the joy of heaven than by seeing our own responsibility, acknowledging that the other person is right and asking for forgiveness. Just as we accept before God that we’re not who we ought to be as his children and that we don’t live as Christians.

The ‘forgive me’ which is said to God from the heart is based on humility. Egotistical and complacent people don’t seek forgiveness, or, if they do, it’s so that they feel comfortable with themselves or to show they can behave in a superior fashion. But these patterns of behavior don’t produce inexpressible joy, because they don’t come from our inner depths, with pain and without excuses.

The tears which may accompany the apology is an expression of the recognition of the sorry state into which we’ve fallen. This is why this weeping is redemptive, renovative, like ‘a baptism of tears’.

The Church is in the world so that each person, all those who’ve gone astray, can find their way. So that they can return to the house of their Father, can find themselves, and others, and can therefore progress towards an encounter with the Lord.

In any case, the main message of the Church is ‘Repent’. This is what has been required of people by Christ, the apostles and all his preachers throughout the centuries, to this day, and will continue to be required until the completion of this age.