An Approach to Orthodox Teaching on Angels

The angels have a special position in the Orthodox Church and particular honor is accorded to them. Holy Scripture (Old and New Testaments) is full of references to angels, who are presented as playing an important role in the implementation of the plan of divine providence. Patristic literature also mentions the angelic powers and provides us with valuable information concerning them. From these sources we can draw important conclusions regarding the creation, nature, knowledge, tasks and number of these immaterial beings. This information doesn’t give us complete knowledge about them, but God allows us to learn as much about them as is necessary for our salvation.

Angels were created by God from nothing and are the product of the free divine will. They were created before the material world [1] and the manner of their creation remains outside our comprehension [2]. They exist and function in a different dimension of time, on a higher level of time, the ‘age’ as it’s called in ecclesiastical literature, and one which isn’t restricted by matter. Their mode of existence is distinguished by the love they have for God and for each other [3].

As regards the nature of the angels, Saint John the Damascan notes that: ‘An angel, then, is an intelligent essence, in perpetual motion, with free will, incorporeal, ministering to God, having obtained by grace an immortal nature: and the Creator alone knows the form and limitation of its essence’ [4]. According to Saint Gregory Palamas, the angelic nature has intelligence and reason, but not the life-giving spirit, because it didn’t receive an earthly body, and therefore the spirit can’t be a  cohesive force for it (the body) [5]. A particular characteristic of the nature of angels is that they are autonomous, which involves the ability to choose freely between good and evil.  The proper use of this ability by the angels gained them sinlessness ‘by grace’, though we know not when because of the lack of information in Scripture. So the angels who displayed obedience to the divine will were rewarded with the crystallization of their will to do good; whereas those who, led astray by egotism, showed disobedience, fell away and became demons [6]. Nevertheless, the adhesion of the angels to the divine will doesn’t deprive them of their autonomy. It means rather that these features co-exist and that freedom and obedience are equated. By the grace of the Holy Spirit, autonomy is sanctified. It’s worth pointing out, however, that, according to Saint Gregory Palamas, the crystallization of the will of the angels to do good and their immovability as regards doing evil was granted to them as a gift at the incarnation of Christ, because, as he points out, ‘they then learned in practice that the path which elevates and leads to becoming the likeness of God isn’t that of vanity, but that of humility’.

Angels are bodiless beings. They don’t have a material body [7] and so are not subject to any kind of perishability or material need. They don’t need nourishment or rest, nor do they die since they have immortality ‘by grace’ [8]. They aren’t however, entirely bodiless, a feature which is true only of God. In relation to God, they’re embodied, but compared to us they’re bodiless [9] and they’re attributed with a kind of ‘ethereal and arial’ body. Another feature of angels is that they’re circumscribed, which, according to Saint John the Damascan can be understood from the fact that: ‘when they are in heaven, they are not on earth and when they are sent by God down to the earth they do not remain in heaven’ [10]. They are therefore not everywhere present, although they do have the advantage of being able to move swiftly. Besides, these immaterial powers ‘have no bounds’ [11], since they are able to transform themselves into figures which serve the purpose of their mission and, since they’re ‘unlimited’, they know no material obstacles. 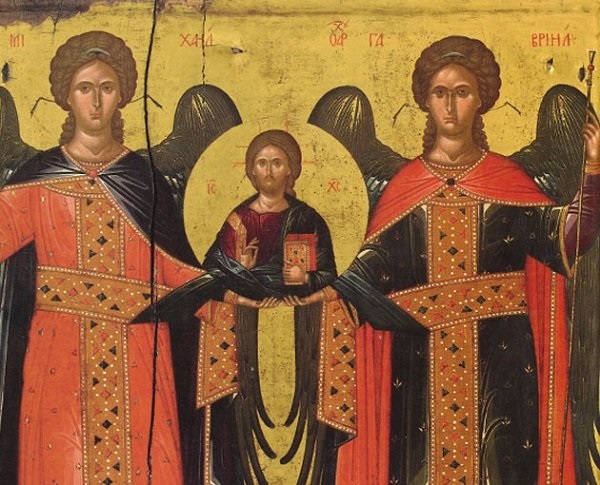 Recognition of a kind of ‘ethereal and arial’ body for the angels is indicative of the fact that they are to be found in a particular location, in ‘mental places’[12], while there can be no question of different sexes or reproduction among them, since they have acquired immortality ‘by grace’. Moreover, the manner in which they communicate is also unknown to us, though it is certain that, as immaterial beings, they have no need of a tongue and the faculty of hearing and so must communicate without words.

The knowledge angels possess is certainly greater than ours, but the angels are in no way all-knowing. They know the past, of course, but not the future, and instances of their foretelling or of interpreting prophesies [13] are due to illumination by God, as whose instruments they function [14]. The limited nature of the angels’ knowledge is apparent from the fact that they don’t have a complete understanding of the mystery of the Holy Trinity and also that they had no knowledge of the divine plan for the incarnation of the Word of God [15]. There is also a distinction of degree of knowledge among the angels ‘because of the superiority of rank or of nature’ [16], that is, the knowledge of the angelic powers is different, depending on the place they occupy in the hierarchy. Transmission of knowledge is from the higher ranks of angels to the lower [17]. 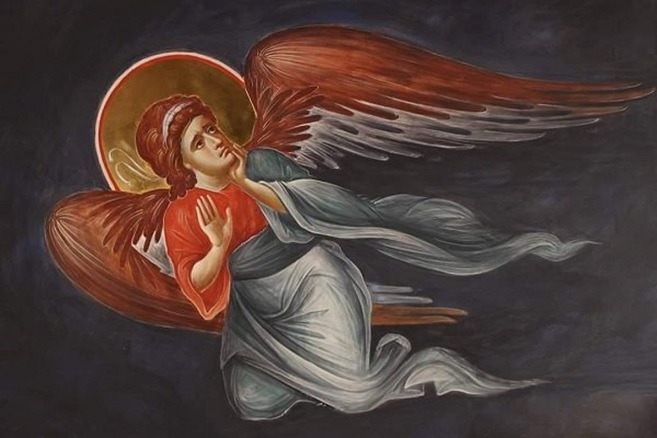 According to Scriptural teaching, the task of the angels is twofold. The first is to glorify God [18] and the second is to assist us humans [19]. The second of the two is described by Saint Basil the Great as circumstantial, since it was assigned to the angels after our creation. It is the belief of the Church, based on Biblical and Patristic testimony [20] that we each have a guardian angel and there is also some suggestion of an angel for nations and peoples, as well as angels being assigned to the protection of local churches. It is the conviction of the body of the Church that the angels accompany the souls of the righteous at the time of their departure from the body [21].

[1] ‘When the stars were born, all my angels praised in a loud voice’, Job 38,7. This particular passage demonstrates that angels were made before visual creation.

[2] According to Saint Gregory the Theologian, they were made, as was the rest of creation.

[3] Maximos the Confessor, ‘Fourth century of chapters on love’, Philokalia.

[6] Saint Gregory notes that the intelligent nature of the angels is receptive of a change towards good or evil. This is shown by the fall of the ‘wicked angels’. Therefore goodness is not part of their essence. Ibid.

[21] Saint John the Carpathian, ‘To the Monks in India’, Philokalia.