‘Do not fear; only believe, and she will be saved’

In today’s Gospel reading, Saint Luke the Evangelist mentions two miracles performed by our Lord Jesus Christ: one is the cure of the woman with the issue of blood; and the other is the even more astonishing resurrection from the dead of Jairus’ daughter. Two separate instances, two different miracles. In the one, a prominent citizen had no qualms about setting aside his official capacity, of abandoning his position and humbling himself before Christ- and other people- falling to his knees and seeking a miracle. In the other, a woman of the people, who hesitated to approach Christ, had the deep conviction that if she were merely to touch him, she would experience a miracle. 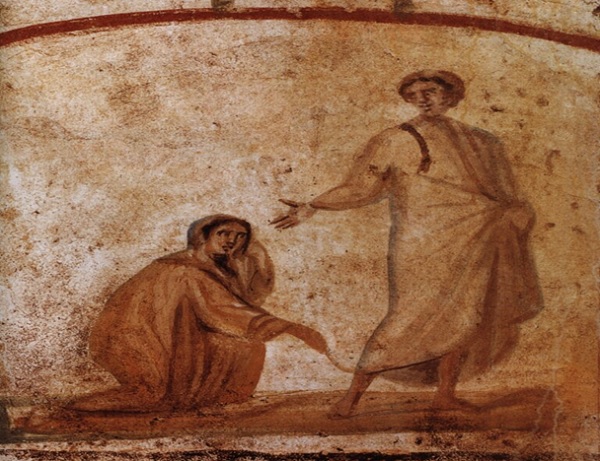 The head of the synagogue, Jairus, was burdened with the cross of anxiety over the life of his child and so made his way to Christ. The death of the girl was untimely and sudden. He was plunged into profound despair, as was his family and, indeed, the whole of Capernaum: ‘All were weeping and bewailing her’. It’s true that the weight of our cross doesn’t prevent us from approaching our Crucified God. We often seek support, we look for some Cyrene, forgetting the God who was first to go to Golgotha and then was crucified voluntarily. In doing so, he became a companion for all of us who are struggling to bear a cross. Jairus anxiously knelt before Christ and asked a favor from him: to go to his home and cure his sick daughter, who was at death’s door. Jesus accepted the invitation, but before he set out for Jairus’ house, another event unfolded before him.

A woman who’d been hemorrhaging for twelve years quietly went up to Jesus, stretched out her hand and touched the hem of his outer garment. She immediately became well; through her touch, Saint Luke tells us, ‘the flow of blood ceased immediately’. But Christ realized what she’d done and said that he’d felt strength leaving him. The woman who’d been cured then appeared before the Lord. He saw who she was and presented her to the crowd, to show her great faith, patience and, above all, her piety.

We see that, whereas in the case of Jairus and his wife, Jesus charged them not to tell anyone about the miracle, with the hemorrhaging woman her cure was announced to the crowd. There’s a contradiction here between the two miracles, which veils the Lord’s great wisdom and love. 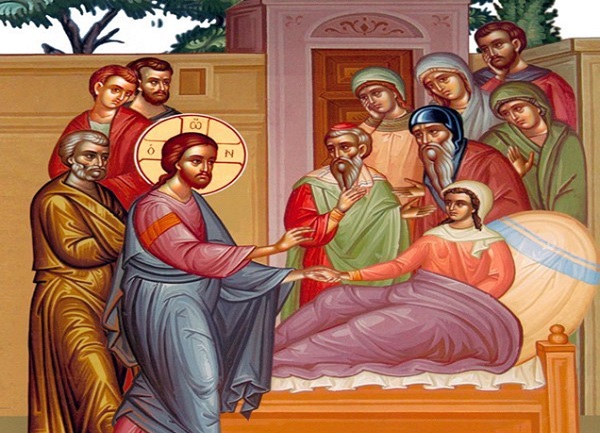 Sickness and death are still in our lives and will continue to be until the Lord’s second coming. Progress in science and technology hasn’t succeeded in ridding us of these two woes, because they’re part and parcel of our fallen nature. But Christ is here for us today, too, having trampled down death by his own death. ‘God of spirits and all flesh, who has trampled down death’ [Burial Service]. If we trust him and hand over our trials to him, then we emerge triumphant from our sorrows and our troubling circumstances. But for this to happen, there needs to be proper preparation and provision, which means humility, repentance, confession and Holy Communion.

When we speak of death, in the case of Jairus’ daughter, we’re talking of a physical thing. But death isn’t the result of our human nature. God made us to be eternal and imperishable. Death entered human nature because of the envy of the devil, after the fall of our first ancestors: ‘for you were deceived by the envy of the devil’ [Burial Service]. Thus, according to Saint Paul, death became our enemy. With the incarnation of the second Person of the Holy Trinity, however, death acquired a new form. According to the very learned Saint Isidore the Pelusiote, the event of death became ‘the end of labors, the beginning of favors’. The terms have been reversed: ‘Before your precious Cross, dead was the terror of humankind; after your glorious passion, humankind is the terror of death’.

The basis for the two miracles is faith. Faith is the necessary condition for us to participate in a miracle and therefore in the Kingdom of God. Faith is the human power which activates God’s protective energy.  God desires our faith before he acts. Our faith is the laying down of our freedom at the feet of God. The impetus for an intervention on the part of Christ is faith. Nowadays, unfortunately, lack of faith is very much more widespread among people. This is why, in our prayers, we need to entreat God to add to our faith, to make us more fervent disciples of his, true Christians rather than church-goers for the sake of appearances. We must really trust and believe in Christ: ‘Do not fear; only believe’. This is what we should bear in mind and apply in our life. Amen.