Love your neighbor and gain Paradise

Through the simplicity and clarity of his parables, the Lord reveals an astonishing reality.  He shows us the love of God and the tragic state of people who are suffering from pride. The parable [Luke 16, 19-31] initially describes the comforts of a rich man and the hardships of a poor man, Lazarus. The two people in the parable, the rich man and the poor one, each represents the class to which they belong. Two people who are not unacquainted; they know each other and their paths cross. In the parable, they’re presented as occupying two spaces and conditions, both on earth and in eternity.

There’s a huge chasm between the rich man and poor Lazarus, not only after their death, but also in the present life. The rich man, whose name isn’t even mentioned by Saint Luke [In some versions he’s called ‘Dives’, but this is simply the Latin word for ‘rich’], lived in luxury and had friends whom he invited to his mansion, where he served them sumptuous meals. He was rich in possessions and misdemeanors, in gold and in the poison of sin. Lazarus, on the other hand, lived in pain and abandonment; he had no-one in his life except the dogs which surrounded him and licked his sores. He was a skeleton to look at. There were huge differences between the two  people. The rich man had the form of a human being, wealthy in material goods but naked in soul. Lazarus, on the other hand, was poor in material goods, but had a lambent soul. He was a man of love and patience, praising God and thanking the nameless rich man for the crumbs he received. The rich man certainly had the opportunity to gain the Kingdom of God* and to make his happiness permanent, had he but shown love to his suffering neighbor.

The Gospel reveals the astonishment of the rich man in Hades, where he was being tortured, when he raised his eyes and saw Abraham from afar. But he didn’t see only Abraham, but also Lazarus in Abraham’s bosom. The rich man asks Abraham to send Lazarus to dip a finger in some water and then wet the rich man’s tongue with it, because he was suffering in the flames of Hades. He doesn’t ask for a quantity of water, merely a drop that could attach itself to a finger. Just as Lazarus had once eaten only crumbs, so now the rich man wanted only to be cooled by a drop of water. This is because when we’re suffering tremendously, even the smallest comfort is deemed great. Abraham calls him ‘My child’,  but explains that he had enjoyed the good things in his life on earth whereas Lazarus had lived in hardship. Now the rich man was suffering and Lazarus was being comforted.

No matter how expensive and luxurious the clothes were that the rich man wore, he was essentially completely naked. After the fall, that is the loss of the worship of his Creator, love for other people and the sanctity of his existence, Adam felt naked. The rich man was another Adam, attempting to cover up the existential vacuum of his fall with material goods, the flesh and the cultivation of all those things which brought him to his denuded state. In this way, the vacuum expanded and became his personal hell. 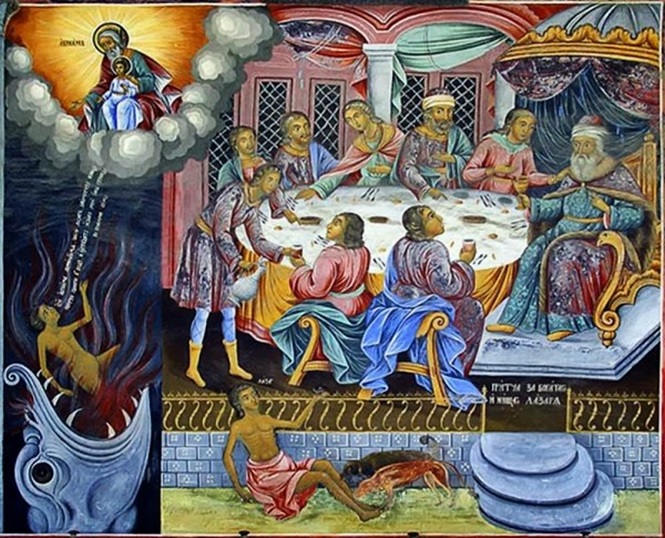 So today’s Gospel reading gives us the opportunity to reflect on certain basic constants of our faith and the way in which each of us lives our daily life in the Church. It’s very easy these days to find people whose main characteristic in their everyday lives is the consumption of the natural resources of this world. Without a second thought for the consequences of such an attitude to life we can all cheerfully squander the riches of this world, refusing to see that there are others around us who also need to enjoy the fruits which human civilization has produced and which, in the end, are on earth for the benefit of everyone. Those who live as though everything belongs solely to them come to the point of losing even their identity as people. As was the case of the rich man in the narrative, they have no name nor any distinct personality, since they’re defined by what they enjoy.

My brothers and sisters, through this parable Christ calls upon us to find our way. He presents us with two types of people. He names the one ‘the rich man’, tells us to avoid being like him and shows us his tragic end. He names the other Lazarus and tells us to follow him, in other words to be people who call upon God every day. We are to depend not on ourselves, not on our own powers, but on him. We must recognize our bodily and spiritual weakness and realize that, before God, we’re poor. This is what Lazarus did  and now he revels in the joy of Paradise. Saint John Chrysostom advises us: ‘Write this parable, you rich and poor. You who are rich, write it on the walls of your house and you who are poor on the walls of your heart. And if you ever forget it, imprint it again on your memory’. Amen.

* ‘Dives’ is related to the English word ‘divine’ and originally meant ‘favored by the gods’. This is, indeed, the case of the rich, who are favored by God by being in a position to help others, if they put their wealth to good use. The rich man wasn’t punished for being rich, but for being selfish and uncaring.