In many of his homilies, Saint John Chrysostom emphasized the great importance of attending church on Sundays, and what a great sin it is to avoid doing so.

In order to get them to pay their ‘tenth’, the Lord ordered them to pay much more than they actually gave: ‘I will throw open the floodgates of heaven and pour out so much blessing that there will not be room enough to store it. I will prevent pests from devouring your crops, and the vines in your fields will not drop their fruit before it is ripe’, says the Lord Almighty. ‘Then all the nations will call you blessed, for yours will be a delightful land’ (Mal. 3, 10-12) . 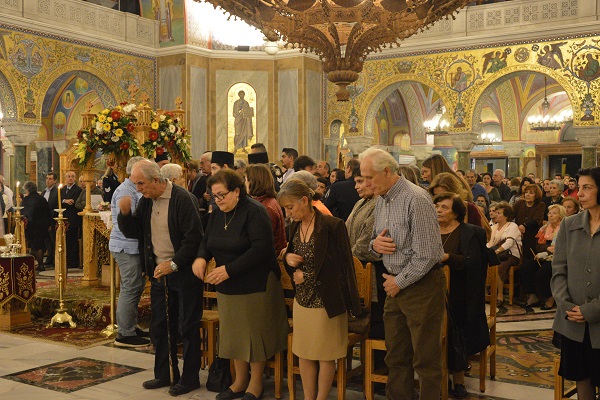 Saint John Chrysostom goes on to say that Christians have the same blessing when they offer to the Lord their own tithe: a day a week, the Lord’s day, which he made his own (Ex. 20, 8-12). They do so by going to his ‘home’ in order to worship and praise him. ‘Go to church for two hours (by going to the liturgy on Sundays) and you’ll bring the benefits of a thousand days to your family’ (P. G. 49, 364).

When the Jews held back their tithe, the Lord condemned them as thieves: ‘You have taken the whole of the payment  [tithe] into the [i. e. your] storehouses;  it will be plunder in the [i. e your].  house’ (Mal. 3, 10) [Septuagint].

The same charge, says Saint John, can be levelled at those Christians who disregard the Lord’s day.

‘And we, too, snatch from his hands  this one day and arbitrarily make it our own. What charge do we deserve for this? We’re like  those who steal sacred and holy things (desecrators) (P. G. 49, 364).

The Lord threatened the Jews who had stolen the tithe from him: ‘You looked for much, but indeed it came to little; and when you brought it home, I blew it away’ (Haggai 1, 9).

He didn’t merely take away the tithe, but everything they’d stored that year. The same’s true for Christians who disregard church attendance on Sundays.

‘If you disdain God, he has his ways to relieve you of all your money at a stroke… Imagine losing the gains of long years of labor simply because you don’t go to church (P. G. 49, 364).

In other words, Saint John tells us: Don’t expect to prosper in life if you disregard the day of the Lord, that is Sunday: ‘God delays, but he does not forget’.

It was Saint Constantine the Great who established this particular day as a day of rest. Not, of course, so that Christians could enjoy a longer sleep, but so that without the hindrance of work, they could attend the Sunday Liturgy of the Resurrection.

Since then, this day of rest has remained in force in all Christian countries, although in many it is partly unobserved by shops remaining open.