Saint Catherine and the Smart Impious

What are we to make of Saint Catherine? We know really very little about her. Even her name is a mystery. According to some, she was originally called Damiani (by a happy coincidence the present Archbishop of Sinai and Abbot of the Monastery of Saint Katherine is called Damianos), although Rufinus claims that she was called Dorothea. At some stage, she became known as Katherine, but what this means is anyone’s guess. It has been derived from the Greek Hecate, or from καθαρός (katharos), meaning “pure” (as well as from Armenian and Arabic). 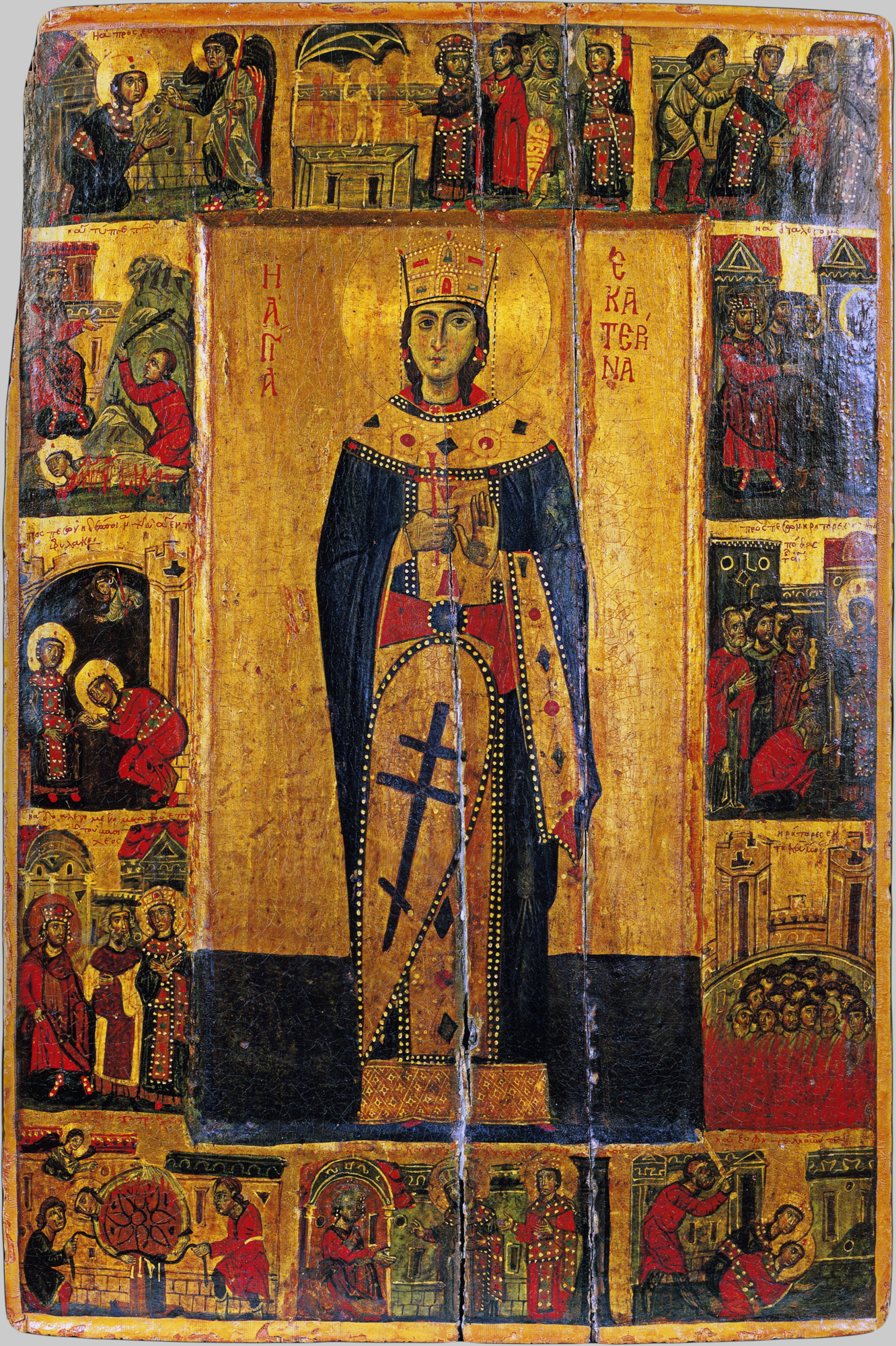 This confusion is central to one part of our argument. Her name in Greek is Αἰκατερίνα, so it is impossible that it derives from Hecate. The Greek system of diacritics was more than likely introduced in Alexandria (where Saint Katherine was born) and has “breathings” or signs of aspiration. To put it simply, there is no ‘H’ in Aikaterina (though there is in Hypatia, of whom more later). Likewise, it cannot derive from “katharos”. Greeks are perfectly capable of saying ‘th’, so the name would have ‘th’ rather than ‘t’ in the middle (in Greek). Apart from this, katharina would make absolutely no sense grammatically. If it means “pure”, the name would be “Kathari”; if it means “purified” it would be “Kekatharmeni”. The point I would like to make here is that it is generally agreed that the young girl’s name was Aikaterina and that speculating and inventing implausible etymologies serves no purpose. The same is true of her Life.

The traditional narrative states that Katherine was the beautiful daughter of the pagan Costus (or Cestus) and Sabinella, who governed Alexandria. She was highly intelligent and diligently studied the arts and sciences, especially philosophy. Having decided to remain a virgin, she announced that she would only marry someone who surpassed her in beauty, intelligence, wealth, and dignity, perhaps an early foreshadowing of her eventual discovery of Christ: “His beauty was more radiant than the shining of the sun, His wisdom governed all creation, His riches were spread throughout all the world”. Raised a pagan (though her mother may have been a secret Christian), she became an ardent Christian in her teenage years, having received a vision in which the the Mother of God pledged her to Christ in mystical marriage.

As a young adult, about 18 years old according to what sources we have, she upbraided the Roman Emperor Maxentius (later defeated by Saint Constantine at the battle of the Milvian Bridge) who happened to be in Alexandria at the time of a pagan feast, attempting to convince him of his error in persecuting Christians. The emperor seems to have been quite taken with her: Eusebius, writing very shortly after the events took place, says that  Maxentius wanted to take the beautiful young girl into his palace as a concubine, but she refused.

The emperor then arranged for a number of the best pagan philosophers and orators  in the city to argue with her, hoping that they would refute her pro-Christian arguments, but Katherine won the debate. Several of her adversaries, conquered by her eloquence, declared themselves Christians and were at once put to death. An interesting footnote here is that in the hymn to Saint Katherine in the Orthodox Church, her opponents are described as “smart”. In Modern Greek and British English this means well-dressed; in Byzantine Greek and American English it means “clever”.

Maxentius went off to inspect his troops, having first ordered that Katherine be imprisoned. When he returned, he was greatly displeased to find that some of his household had been influenced by her and had converted to Christianity. Katherine was sentenced to be tortured on a spiked wheel, which did not kill her, and she was then beheaded, in the year 305.

None of this seems out of place. We know that Maxentius was, indeed, a co-emperor at that time, that he had firm support in North Africa (his severed head was sent there after his defeat to convince his supporters that he really was dead) and that Christians were being persecuted then: Saint Dimitrios was martyred in Thessaloniki in the same year and Saint George two years earlier in Nicomedia, so the persecution was very widespread. We also know that Alexandria was a centre of learning and that Hypatia, a woman of great intellectual gifts, was killed there by a Christian mob in 415 AD. Or do we?

The actual evidence of the existence of Hypatia is no more compelling than that for Saint Katherine, yet she is accorded something akin to cult status today, with a film being made about her (Agora, starring Rachel Weisz) while Saint Katherine is “air-brushed” out of the picture. In The Penguin Book of Saints, Donald Attwater declares that the “legend”  of Saint Katherine is “the most preposterous of its kind”. Well, of course it is if you read the barnacles that adhered to it over the centuries, but they do not invalidate the basic truth.

In the same vein, Christine Walsh says in her book The Cult of St Katherine of Alexandria in Early Medieval Europe (Ashgate 2007) that: “As we have seen [!], the cult of St. Katherine of Alexandria probably originated in oral traditions from the 4th-century Diocletianic Persecutions of Christians in Alexandria. There is no evidence that Katherine herself was a historical figure and she may well have been a composite drawn from memories of women persecuted for their faith. Many aspects of her Passio are clearly legendary and conform to well-known hagiographical topoi”. What on earth does this mean?

Of course the cult of Saint Katherine originated in oral tradition. Nobody was there with a mobile phone to take a video. “And she may well have been a composite”; and she may not. “Many aspects of her Passio are clearly legendary and conform to well-known hagiographical topoi”. Does this mean that many martyrs were tortured and died for the faith? No argument with that. Read the life of Elder Païsios, a saintly figure of our own times. It could easily be rendered in a way that makes it sound “hagiographical” (“He was born to pious parents and baptized by Saint Arsenios, who foresaw his future as a monk”), but it is still true.

Another aspect worth recalling is that people express themselves differently in different ages. There is a version of the martyrdom which states that when Saint Katherine was stretched on the wheel with spikes, it was not blood which flowed but milk. It may be that some innocent- in the best sense of the word- people believed this, but most people at the time would have understood it as meaning that she was untainted. This may seem far-fetched, but in a thousand years hence, “scholars” may well be amazed that people in 2013 could talk about “the milk of human kindness”. It might also be mentioned that another modern icon, Joan of Arc, mentions Saint Katherine as having appeared to her to lend her strength, and this was a thousand years and more after the martyrdom.

In his article “The Dragon that Swallowed Saint George”, Whittall Perry says: “The ancient church authorities may have been ‘primitive’ by our lights, but they were not imbeciles”. The ancient Church authorities were scrupulous in weeding out spurious information that would injure the faith. For some reason, North Africa seems to have been a hotbed of heresy and schism. Yet the story of a young woman who dared to oppose an emperor and his minions with her learning, strength of character and faith, and triumph over them in martyrdom, was accepted as true. May her prayers be with us.

Let us praise the renowned bride of Christ, Katherine the divine, protectress of Sinai, our aid and assistance. For she brilliantly silenced the clever impious by the sword of the Spirit, and now, crowned as a martyr, petitions for great mercy for all.