Saint Nektarios was born on 1 October 1846, in Silyvria, Thrace, to poor and devout parents. At his baptism he was given the name Anastasios. He learned his first letters, as well as the Christian teachings, from his mother. In Silyvria he finished Primary and Middle School, before going on to Constantinople to continue his studies, working, in the beginning, at a tobacconist’s in order to help with his family’s finances. He began to study and collect the sayings and axioms of the Holy Fathers and classical philosophers which formed the two-volume book ‘A treasury of holy and philosophical scholars’, which he published in 1895. Before he was even 20 years old, he was appointed to the post of tutor at the school of the Dependency of the Most Holy Sepulchre in Constantinople. 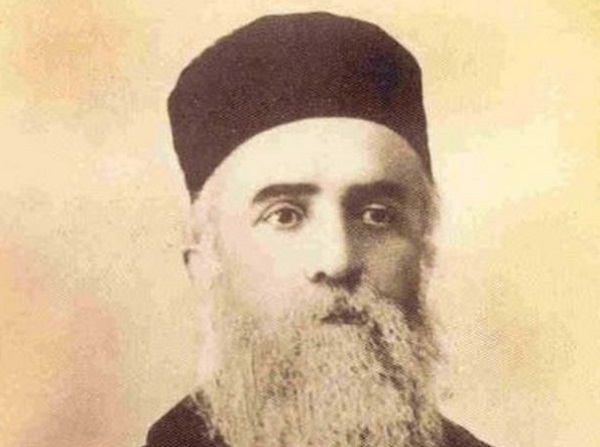 He then left for Chios and worked as a teacher in the village of Lithi, while at the same time preaching in the churches of the area. Seven years later, he became a monk in the ‘New Monastery’ on Chios, taking the name Lazaros, and starting work as the monastery’s secretary. A few months later he was ordained deacon and took the name Nektarios.

In 1877, he went to Athens to continue his studies, his expenses being met by the Horemi brothers. After three years, he returned to Chios, having completed his course of studies. At the end of September, 1882, he moved to Alexandria and Patriarch Sofronios helped him to go to the Theological School in Athens, on the understanding that he would return to Alexandria after graduating and would work for the Patriarchate.

On 23 March, 1886, when he returned to Alexandria, he was ordained priest in the church of Saint Savvas by the Patriarch of Alexandria, while in August of the same year he was raised to the rank of archimandrite. He worked as secretary to the Patriarchate and then as the Patriarchal Commissioner in Cairo.

In January 1889, he was consecrated Metropolitan of Pentapolis. His example and zeal in the performance of his duties meant that his flock came to love and admire him, but that some members of the Patriarchate were jealous and slandered him. On 11 July 1890, he was dismissed by the Patriarch of Alexandria and obliged to leave Egypt. So once again he found himself in Athens, alone, reviled, ignored, deprived even of his daily bread. After a difficult year he was appointed by the Church of Greece to the post of preacher on Evia on 15 February 1891, before becoming headmaster of the Rizareio School in March 1894. He remained there for 14 years, giving new impetus to the school and helping with the formation of young clergymen. In the little free time he had, he prayed, studied, wrote a large number of works on theology, ethics and Church history, and also pursued his favourite pastime: looking after flowers and trees.

In the summer of 1898, he visited the Holy Mountain, travelling around the monasteries for almost two months. In that time he made an extensive study of the manuscripts in the library, as part of his research into material for his academic work.

Because he had within him the desire for the quietude of the monastic life, he satisfied the wishes of some of his spiritual daughters and founded a coenobitic monastery on Aigina, where he withdrew after submitting his resignation from the Rizareio School. At his own expense he built a small house, close to but outside the monastery. It should be noted that he took an active part in the construction, ferrying soil or mud and doing the digging, helping the builders. Again he suffered slander and unfair charges, this time about the monastery, from members of the hierarchy. Recognition of the monastery came four years after his demise and was communicated to the nuns by a letter from Archbishop Chrysostomos on 15 May, 1924.

In the last years of his life, he suffered from an illness which brought him unbearable pain. After venerating an icon of the Mother of God, he told his disciples of his impending departure from this life and agreed to the recommendations of the doctors that he should go to Athens and receive treatment at the Aretaieio hospital. He was under treatment there for almost two months and in the end, at about midnight on 8/9 November 1920, he departed for the heavens at the age of 74.

His corpse, which had begun to emit a fragrance, was transported to Aigina and, from the harbour to the monastery, was borne by the faithful, who, together with the Christians who had known him, wept over the loss of the meek and loving disciple of Christ. . He was buried in the courtyard of the monastery, next to his beloved pine tree. God glorified him to all those who trusted in his intercessions. The body of the Saint miraculously remained whole for more than 20 years, exuding a light, heavenly fragrance. Thirty-two years after his demise, his relics were translated, on 2 September 1953, by Metropolitan Prokopios
He was officially recognized as a Saint of the Orthodox Church in 1961, by a Patriarchal Synodical Act from the Ecumenical Patriarchate. It was then that 9 November was appointed as his feast day.