11th Sunday of Luke (excerpts from the Kyriakodromion)

If a great king magnanimously laid out a banquet and invited everyone under his rule- young and old, rich and poor- to attend; and if he had prepared all kinds of appetizing, rich foods; and if, when the time came to eat, he sent out his only-begotten, precious son to bring in the guests; and if, by their refusal to take part in this rich, royal banquet and by their invention of absurd excuses, they scorned the king and his son who called them; would  they not be deserving of  harsh condemnation? They certainly would. Because they disrespected such a generous and magnanimous king and deprived themselves through their foolishness of this sumptuous banquet. 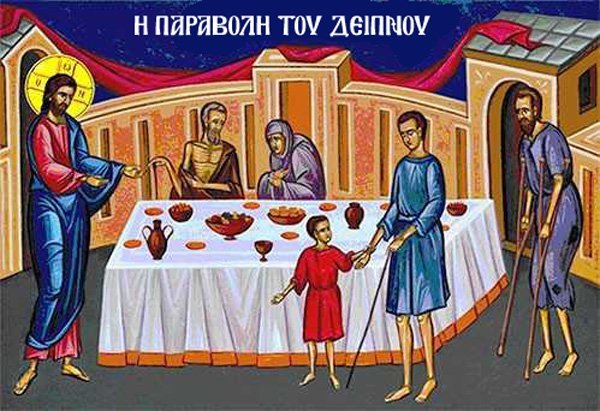 ‘At the time of the banquet, he sent out his servant’. The servant is he who condescended to be clothed in the form of a servant, the Son of God, who became human. He was well-pleasing to the Father as his Son and as God, but also as a man he, who is alone without sin, accepted and served every will and decision of the Father, fulfilling all righteousness. He never committed the slightest sin, nor was there any wickedness in his spotless and most-holy mouth. At the time of the banquet, that is the pre-determined and specific time, as it pleased him and as he wished, he was sent out to muster the guests, meaning everyone. Because God, being merciful, calls upon everyone to recognize him by showing them the orderliness of heaven and earth and of other creatures. He does so also through the natural law which he gave us in the beginning, so that we should know him as our God and Creator. The Jews were more familiar with the Law which had been given them and with the Prophets, which is why they were called first.

‘Come, for all is ready’. In Jesus Christ, God the Father prepared all the indescribable blessings which he has given us: forgiveness of sins; communion of the Holy Spirit; adoption into purity and splendor; righteousness; sanctification, redemption; the kingdom of heaven and escape from hell.

Yet they all started making excuses. Of one accord and by common consent the foolish people cried off and declined such bliss. This is what the leaders of the Jews were like, the Pharisees, Scribes, unlettered as they were. They declined the invitation and refused to accept Jesus Christ as God, godless as they were. This is why they were not allowed into the divine, mystical supper, unworthy as they were.

The man who bought the field and the other who bought five yoke of oxen are people who love riches and money and are dedicated and devoted only to earthly things. They never think about matters of the mind and are neither able nor willing to take part in the rational supper, since they are senseless and mindless. They are boorish and uneducated people, without the wit to understand the divine mysteries. The five yoke of oxen are the five senses of the soul and body through which we deal, either spiritually or carnally, with whatever it is that each of us wishes and wants. Some people are interested in earthly things and plant the seed of the things of the flesh, in which case they reap corruption and death. Others desire the heavenly things; they work for and plant the seed of eternal life. Let us be aware of the damage we do ourselves, let us mourn our fecklessness, in that, for the sake of fields, oxen or carnal pleasures, we will be deprived of God’s gifts and will lose the enjoyment of eternal bliss.