‘Come you faithful, let us see where Christ was born’

With joy, exultation and jubilation, the Church celebrates the mystery of the Incarnation of our Savior, Jesus Christ, in the lowly cave, in the manger of dumb beasts in Bethlehem. This is a ‘great and strange mystery’ but also an event of world-wide, spiritual and true importance. This event marks the first-fruits of the new creation, of the new world which God offers humankind. In doing so, he reveals the true knowledge both about the Triune God and about the free human person.

The nativity of our Lord is a unique, unparalleled event: ‘Our Savior has visited us from on high, since God has appeared in the flesh. As a child he was born to us, a son who was given to us’ (cf. Is. 8, 5). 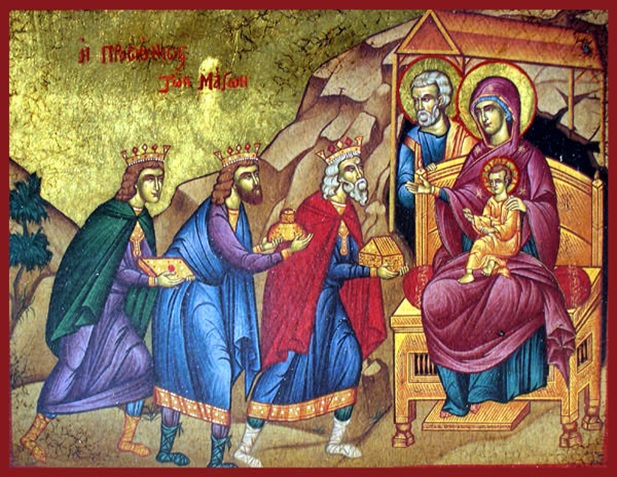 In his extreme goodness, the King of Kings, the Creator of all things is clothed in the form of a servant. In a cave in Bethlehem, room is found for him who is ‘seated on the cherubim’ and ‘spreads out the heavens like a curtain’. The true God, ‘being rich, became poor that we might become rich through his poverty (2 Cor. 8, 9).  ‘He who is complete is emptied for us in the flesh and he who is without beginning accepts a beginning. He who is rich is made poor and, as the Word of God, lies as an infant in the manger of the dumb, effecting the renewal of all things from the ages’ (Theotokio, 2nd canon, ode 5, feast of the Forebears). Christ, who was born for us, emptied himself. He himself diminished his majesty and his glory. He consented to be born secretly and mystically, without fuss and secular pomp, there in the cave, in the manger of the dumb beasts. Instead of being born in Jerusalem, in the capital, he preferred the insignificant little town of Bethlehem. Instead of luxurious palaces and kingdoms, the manger with the straw for the dumb beasts. Instead of raiment worked in gold, the poor swaddling clothes of the Virgin Mary. He concealed his divinity ‘in the likeness of the flesh’ (Rom. 8, 3); he clad himself in human nature, though without sin, in order to save us from our own sins. Behold the inconceivable mystery!

The divine incarnation is ‘more godlike than the former’ and ‘to those with minds, more sublime’ (Saint Gregory the Theologian, Discourse 38 On the Theophany that is the Birthday of the Savior, PG 36, 324B-325D). Indeed, the incarnation of the Word of God can only be understood as a movement of divine generosity, as an emptying which elevates, and as kindness, as divine poverty designed to allow us to ascend to God, both enriched and filled with ‘his divinity’. Saint Gregory concludes by saying that this is why we respect the divine nativity and why we venerate the new-born Lord and Savior, Jesus Christ, who became, ‘the perfection and reconstruction, and the path back to the first Adam’(ibid. 329CD-332A).

In his Gospel, Saint John the Evangelist expresses the event of the divine incarnation in very theological terms, saying: ‘… the Word became flesh and dwelt among us and we beheld his glory, the glory as of the only-begotten son of the father, full of grace and truth’ (Jn. 1, 14). In other words, the Son and Word of God, the second Person of the Holy, Consubstantial and Undivided Trinity, took human flesh and became one with us, giving us the opportunity to see his glory, which he has as the Only-Begotten Son of God the Father, full of grace and truth. This glory and the joy which spring from the self-emptying and perfect humility of our Lord are not secular circumstances of this world, but internal experiences and states. This is why they’re experienced through the deep personal relationship people have with God, which has repercussions on the relationships they have with others and with the whole of creation.

Let us become partakers in the event of the divine incarnation, so that we may encounter in a personal and existential way the new-born Christ ‘lying in a manger’. We won’t meet him in the virtual reality of the consumerist feast, but in the reality of our ecclesiastical community. We’ll meet him when we become observers of his commandments (‘those who keep my commandments are those who love me’). We shall meet him where our love for others is true, bountiful, without reciprocity, with sincerity, and support for them in their problems and anxieties. We’ll meet the new-born Christ when we keep vigil, pray, study the divine teachers and strive for the triumph of concord and justice in the world. May our Savior Christ, who was born in a cave and lay in a manger, make us participants, true pilgrims and fellow-travelers of his in the mystery of his divine incarnation.

My heartfelt wish is that Christ will grant peace to the hearts of all of us. May the ‘Glory to God in the highest and on earth peace’ that sprang spontaneously from the angels at the Nativity of Christ, also resound spontaneously in the daily routine of our hearts. May peace be brought to our inner world, to our thoughts, and may our feelings be replete with peace and joy.