Saint Nicholas, the Saint of the Seas

Saint Nicholas was born at the south-east corner of Asia Minor, in the town of Patara, in the 3rd century (at the time of the persecutions of Diocletian and Maximian) of devout and rich parents, who had been childless for many years. From an early age it appears that God had destined him for a life of sanctity and of dedication to Himself. The fact he became a “teacher of abstinence” is demonstrated by the fact that, on Wednesdays and Fridays, he took his mother’s milk only once a day. His parents brought him up as an observant and reverent Christian and taught him the Scriptures. Very early on, the Christians of the town of Patara decided he would make a good shepherd for them and petitioned the Bishop of Myra in Lycia to ordain him to the priesthood. The words of the Bishop- that Nicholas would be a comfort to the grieving, a good shepherd who would return to the flock those who had lost their way and save many souls in danger- would later prove to be prescient. 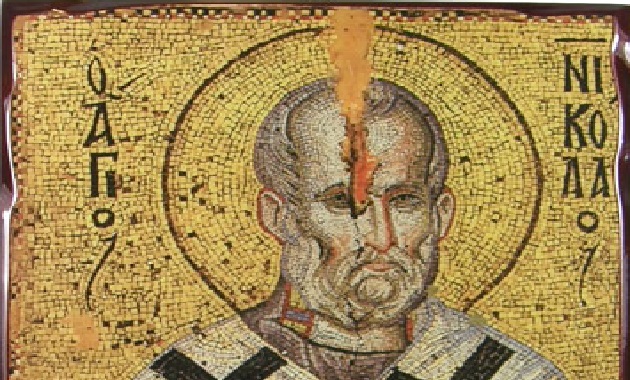 After his ordination, he increased the austerity of his spiritual struggles with fasts, vigils and prayers, continuing to excel at the monastic life. After the death of his parents, he used his large inheritance to support those in need by giving alms in secret. One instance which is well known is that of three girls whose father wished to sell them into prostitution in order to pay off his large debts. The Saint thrice offered enough money to set the girls on their feet financially. As a protector of the wronged, he saved three innocent citizens from certain death by snatching the sword from the executioner, as well as three high-ranking officers who had been falsely accused of plotting a coup against the emperor. The three officers called upon the saint for help and he appeared to the emperor in a dream and told him that the men were innocent.

Because of his virtues, God granted him the grace to work miracles. Before he became a bishop, he made a trip to the Holy Land, and twice during the voyage calmed a storm which was endangering the ship in which he was sailing.

Saint Nicholas became a bishop in a miraculous manner. When the previous Bishop of Myra fell asleep in the Lord and the other bishops gathered to elect his successor, someone suggested that they should pray over the matter. God revealed to one of the bishops the person to be elected. The bishop was to stand at the entrance to the church and the first person to enter in order to pray was to be the new bishop of the city. Moved by the Holy Spirit, Nicholas went to the church to pray. There he met the bishop to whom God had revealed how the election was to proceed. The latter brought Nicholas to the other bishops, who consecrated him, while the crowd of believers who had, in the meantime, gathered in the church rejoiced at the election.

His efforts to spread the faith led to his arrest by the pagan authorities, who subjected him to torture and imprisoned him, together with other Christians. When Constantine the Great became emperor and stopped the persecutions, Nicholas was freed from his bonds and returned to his flock. He was a “martyr by disposition”, even though his blood was not actually shed.

Saint Nicholas took part in the 1st Ecumenical Synod which was convoked by Constantine at Nicaea in Bithynia, to deal with the Arian heresy. According to tradition, Saint Nicholas, who was a “model of faith” and an “image of gentleness” was seized with holy zeal and, unable to bear the blasphemous words of Arius, slapped him on the face.

What would happen today, Saint Nicholas? People would revile you and burden you with names such as “ruffian” and “trampler on human rights” and goodness knows what else. But God doesn’t see as we do: He sees the motives behind the actions. Saint Nicholas didn’t strike Arius out of hatred, but in order to rebuke him and bring him out of his error. God alone knows the motives for actions; people see only the actions.

According to the Life, this action on the part of Saint Nicholas provoked an immediate reaction on the part of Constantine, who was present, and he ordered the forces of law and order to seize the saint, to remove from him his badges of office as a bishop, that is the Gospel and stole, and to take him to prison in chains. But he was justified on the evening of the same day. Christ and His Mother appeared and gave him back his Gospel and stole. Next morning, some of his acquaintances found him free of his chains, wearing his stole and reading the Gospel. The emperor learned of this, immediately begged his forgiveness and had him released.

As long as he lived, and even after his death, Saint Nicholas miraculously saved a great many people who were travelling by sea, as well as the crews of the ships they were sailing in, and he has thus come to be regarded as their protector. As his biographer, Symeon writes: “His fame took wings, soared, went everywhere and embraced all things. It crossed the blue deep, travelled all over the seas and there was no place where people did not hear of his wondrous interventions”. Another well-known incident is that of the person who fell overboard and was saved as soon as he shouted “Saint Nicholas, help me”. He suddenly found himself at home, with his kith and kin, even though his clothes were still dripping wet with sea water. Another time, sailors in danger of sinking called upon Saint Nicholas and he appeared and said to them: “You called and I came”. He took over the rudder and commanded the sea to be calm.

Today, in Greece, there’s not an barren rock, islet, island, coastal site or even a place further from the sea which doesn’t have an iconostas, chapel, parish church or monastery church in honour of Saint Nicholas. Besides, the Greek navies, both military and merchant, have the Bishop of Myra in Lycia as their patron saint, and depictions of him fill the bridges of the ships, the cabins of the sailors and the houses of their relatives with his presence and grace, because the saint “preserves from dire straits and bitter death those who run to him” (E. P. Lekkos, Saint Nicholas, p. 43).

When Saint Nicholas had reached a great age, he departed this life after a brief illness. He was buried in the church of Myra which was built in his honour and has a large shrine. Until the 10th century, his grave produced holy myrrh which cured all manner of sickness. In 1087, the soldiers of the First Crusade took his relics to Bari in Italy.

Saint Nicholas is honoured particularly by the Holy Monastery of Vatopaidi, both within the monastery and at its dependency of Porto Lagos, which is dedicated to the saint. The church and all the buildings of the dependency have been renovated. There is a healthy presence of monks from the monastery, so the daily services are read, as are canons of supplication, both to Saint Nicholas and in the chapel of the Mother of God the Queen of All. Many people from the neighbouring region, as well as from the rest of Greece and abroad, find relief and comfort there. [The main churches of the monasteries of Grigoriou and Stavronikita on the Holy Mountain are also dedicated to him].

“Nicholas, who was a great intercessor while alive, having left the earth, still lives to intercede”

By his holy prayers, may God have mercy upon us. Amen.