I. Christ is born, glorify Him. Christ is from heaven, receive Him. Christ is on earth, be lifted up; sing to the Lord, all the earth and, joining both in one, I say: Let the heavens rejoice and the earth be glad that He Who is of heaven is now of earth. Christ in the flesh, rejoice with trembling and with joy: with trembling because of your sins, with joy because of your hope. Christ [is born] of a Virgin; Women, live as virgins, that you may be mothers of Christ. Who does not worship Him Who has been from the beginning? Who does not glorify Him Who has lately come? 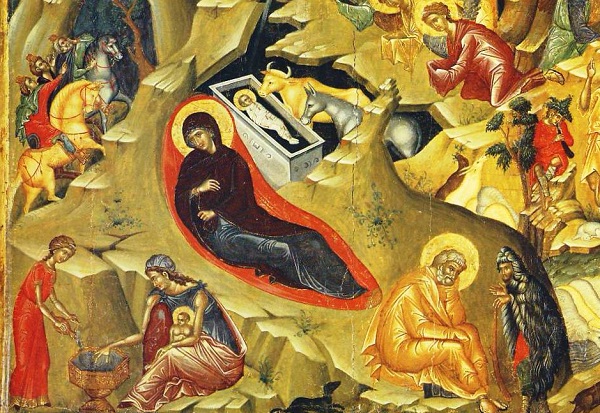 II. Again the darkness is dispelled; again Light appears; again Egypt is punished with darkness; again Israel is illumined by a pillar [of fire] (Exodus 14:20) May the people that sat in the darkness of ignorance, see the great light of awareness (Isaiah 9:6). ‘The old things have passed away; behold all things have become new’ (1 Cor. 5:17). The letter [of the law] has made way and the Spirit has come to the fore. The shadows disperse and truth has entered. Melchizedek is completed . He Who was without a mother is now without a father (without a mother in His former state [God], without a father in His present one [human infant]). The laws of nature are abolished; the world above must be filled. Christ commands it, let’s not set ourselves against Him. Clap your hands all you peoples, for unto us a Child is born, and a Son is given unto us, Whose Government is upon His shoulder (since it’s assumed through the Cross), and His Name is Angel of the Great Counsel of the Father (Isaiah 9:6). Let John cry, ‘Prepare the way of the Lord’ (Matt. 3:3). I, too, will shout aloud the power of this day. He Who has no flesh has become incarnate; the Son of God becomes the Son of Man, Jesus Christ, the same yesterday, and today, and for ever (Hebrews 13:8). Let the Jews be offended, let the pagans deride; (1 Cor. 1:23); let heretics talk their tongues off. They’ll believe when they see Him ascending into heaven; and if not then, when they see Him coming out of heaven and sitting as Judge.

III. More of this later. Today’s feast is the Theophany or Birthday- it’s called both. Two titles for one thing. God was manifested to us through His birth. The one Being is the eternal Being, from the Eternal Being, beyond cause and word, (since there’s no word superior to the Word); the other came into being later, for our sakes, so that He Who gives us our being could also give us our well-being. Or rather so that He could restore us to well-being through His incarnation, after we’d fallen, through our wickedness. The name ‘Theophany’ is given because He is made manifest, and ‘Birthday’ in respect of His birth.

IV. This is the feast; this is what we’re celebrating today: God coming to the human race, so that we can go out, or rather (to be more precise) so that we can go back to God; so we can put off the old person and put on the new; and that as we’ve died with Adam, so we will live with Christ, (1 Cor. 15:22), being born with Christ, crucified with Him, buried with Him and rising with Him (Col. 2:11). I have to suffer in order to revert to the good. Just as sorrow followed from what was pleasant, so now what is pleasant will arise from sorrow. ‘Where sin abounded, Grace was even more abundant’ (Rom. 5:20), and if tasting condemned us, how much more does Christ’s Passion justify us. So, let us keep the Feast, not as if it were a heathen festival, but in a godly manner; not according to the way of the world, but in a style above that of the world; not as our own thing but as something belonging to Him Who is ours, our Master; not as something weak, but as something healthy; not as something created but as something re-created.