The Sunday before Christmas is full of names. Both in the Epistle, but particularly in the Gospel reading, there are long lists presented of people who preceded the Lord Jesus, and who, despite the variety in their ways of life, are all characterized by the common denominator of the anticipation of the Saviour, Redeemer and Benefactor of humankind. And this expectation, which of all of them shared, had common ground on which it grew: faith.

This is why today’s Epistle reading begins with the words ‘By faith’, proclaiming that which should dominate our progress towards Christmas. This is because you can’t meet Christ, can’t celebrate Christmas, without faith. At every feast of the Church, the war is cunningly fought, with subtle stratagems on the part of the devil, but this is particularly so at Christmas, when thousands of other things occupy centre stage, rather than the feast and its spiritual content. So the dominant themes are the commercialism of the season, the consumerism, the deliberate fostering of sentimentality or whatever else makes us ‘have a nice time over the holidays’, without reference to the dawning Sun of Righteousness and the world-saving dimension of His coming. 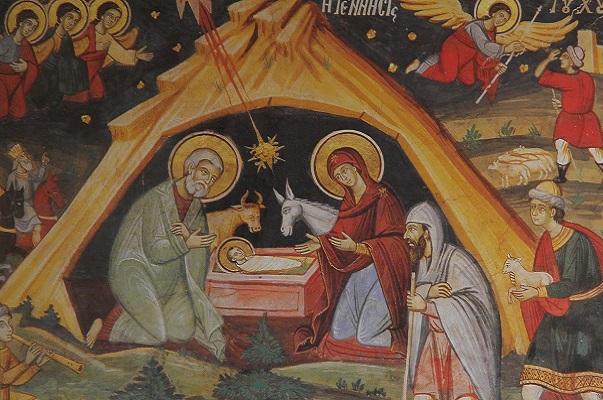 Abraham’s faith
Why does the Epistle reading begin with a reference to Abraham’s faith? So as to show not so much the content of that faith- what he believed- but the quality of his faith- how he believed. And Abraham, through the way he believed, represents a unique example for our times. How did he believe? In a self-sacrificial way, whole-heartedly and totally. Proof of this is his way of life. In an age when the extended family played a leading role in the safety and survival of the individual, Abraham, in obedience to God, left the confines of his homeland and the security of his kin, not knowing where God would lead him. It was enough for him that God was his guide.

And even when God brought him to the ‘promised land’, he still lived there as an outsider, as if the land were foreign to him and unsafe, despite God’s promise. That he felt that this land was foreign to him is demonstrated not only by the fact that he lived in tents there, but also by his actions on the death of his wife, Sarah, as recorded in the Book of Genesis. Addressing the sons of Heth, he says: ‘I am a sojourner and a stranger among you, give me therefore possession of a burying-place among you, and I will bury my dead. (Gen. 23, 4). He who had been told he would receive ‘the promised land’, didn’t even own six feet there where he could bury his dead wife.

‘He was looking forward…’
Why did Abraham behave and feel like this? Because he was aware that the ‘promised land’ wasn’t defined by time and place. Abraham understood the ‘promised land’ as being the place from which we’d been exiled because of Adam’s foolishness. This is why Saint Paul says that Abraham ‘was looking forward to the city which has foundations, whose builder and maker is God’. Abraham lived with the prospect of a home in heaven, in the real city of God, which had unshakable foundations, not in terms of the statics of engineering and architecture, but those of the divinity, as a genuine construction of our all-powerful God. In other words, that city which doesn’t depend for its existence on things which are perishable and transient, such as riches or power, but which is founded firmly on our eternal God.

Abraham wasn’t content with the earthly and the temporary when he was in a position to seek the heavenly and the eternal. This is why the Church highlights this particular kind of faith today: so that we can understand the real perspective of the coming feast. We can’t celebrate Christmas if we enter into a compact with the worldly, secular view of the celebration. We belittle Christmas when we celebrate it like that, basing any joy we experience on the decorations. When they’re taken down at the end of the feast, there goes our joy as well, and the feast vanishes into oblivion, forgotten like so many others…

The Church insists that the feast of Christmas be given its proper spiritual dimension, because, with this feast we hear the resounding invitation: ‘Christ [has descended] from heaven, meet Him; Christ [is] on earth, be uplifted’. The perspective of heaven is confirmed. The dominion of the earth ceases. This is the justification of those who, whatever the combination of historical circumstances they’ve had to face, have kept alight the flame of belief in our home in the heavens, an eternal, settled abode which has been prepared for us by God the Creator.

My friends, the Church always- though particularly today- emphasizes anticipating our eternal home as a way of living and a guarantee of genuine faith. Let’s not become entangled in the complexities of the present world, but as sojourners and strangers, let’s make our way through this land, in the certain knowledge that the way we use the time of our life here, the priorities we set, the choices we make, are the criteria on which we’ll be granted citizenship in the Kingdom of Heaven.