Some years ago, a lady sent a letter to the late elder [Saint] Efraim Katounakiotis, in which she told him that she had the weight of the world on her shoulders and a great cross which she was unable to bear. Elder Efraim answered: ‘You write that you have many burdens. I say to you: “All the better for your soul”. God, who gives you these burdens knows that you’re bearing so much; he knows how much your soul can stand; that if he gives you more, you’ll fall; that if he gives you less he’s being unfair to you, reducing your eternal reward and eternal joy’.

In one part of Athens, there was a cobbler, a very harsh man, who had a little girl whom he tormented cruelly. The poor thing remained patient and then contracted tuberculosis and became bed-ridden. She didn’t complain, she didn’t talk back to her step-father, but bore everything with great patience. In the end, she died, but not before an Abbess made her a nun with the name of Anysia. When her relics were retrieved, they gave off fragrance. This is a sign of sanctity. Do you see how Christ rewards patience? If only we knew the eternal blessings our All-Good God will grant us, we’d ask him to always give us sorrows, trials and disappointments here, so that we might rejoice eternally. The Church tells us that if we knew the eternal blessings that await us, we’d gladly bear all the sorrows and trials from the creation of the world until the end of the age, for the sake of these inexpressible blessings. But because we don’t know them, we despair and are easily disheartened. 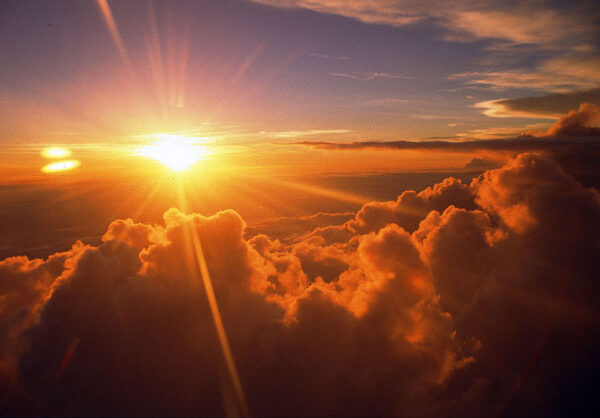 In Crete there was a woman who suffered greatly at the hands of her husband. They were extremely poor. The husband was a heavy smoker and drank a great deal and when he didn’t have the money for drink and cigarettes, he would take his anger out on his wife and beat her mercilessly. One evening he went home and gave his wife a severe beating. Maria, as her name was, suffered bravely and kept calling on Our Lady. At midnight, she got up, combed her hair, dressed in her best clothes and lay down, never to awaken again. She died. After a year, when her relics were retrieved, the whole place was redolent with fragrance. They hadn’t even dug down as far as her bones, yet an ineffable fragrance emerged. When they did take out the bones, the fragrance was overwhelming. Everyone wept. Her husband was overcome and changed his ways. He gave up smoking, stopped drinking and lived thereafter in peace and repentance. This is how Christ crowns and rewards those who are patient. Through the prayers of Saint Efraim Katounakiotis, may Christ grant holy patience to us all.

In May 1988, a friend of mine who’s an archimandrite, paid a visit to Elder [Saint] Païsios. The elder shared many wise things with him and stressed the importance of patience, recalling the words of Christ: ‘In your patience you will gain your souls’. When the archimandrite asked him: ‘Why don’t you go to a doctor, Father, to get some relief from your pain?’, the elder answered: ‘You’re a priest, Father, and you ask me why I don’t go to doctors? What we earn through our prayers, fasts and the efforts we make, we spend. This is why we have to have savings, by bearing the sorrows which God allows’.

He went on to tell a most instructive story:

‘Here at the Athoniada School [on the Holy Mountain], there are two brothers from a family that used to be Muslim. The father of the boys, even though he didn’t know a lot, wasn’t satisfied with the Muslim religion. He saw Christianity as being superior to Islam, so he arranged to be instructed and was then baptized Orthodox Christian. He wasn’t very knowledgeable, but he constantly said two things and tried to apply them: the first was that we should observe God’s commandments in order to gain our salvation; and the second was that Christ is just.

From the moment he became Orthodox, his wife and family declared war on him. When he went off to a room to pray on his knees, his wife would mock him and say: “You poor thing. There’s nothing. There’s no Christ, only Allah and Mohammed”. He, however, continued his spiritual struggle in patience. In order to bring the man back to the Muslim religion, an imam told the man’s wife and family not to give him any food or a change of clothing. He also told the man’s wife that, when he was praying, she should take a bucket of water and drench him with it. And then not give him fresh clothes to change into. So this is what the wife and family did. But with amazing patience and tolerance he strove to keep God’s commandments. He didn’t lose his temper,  he didn’t become frustrated and he would eat any scraps he came across. And something else wonderful occurred. He worked in the headquarters of the prefecture. He saw the corruption that was common there and couldn’t stand it, so he resigned from his job and went to work as a construction laborer.

His trials lasted more than two years, until one fine day, when he was praying, his wife came and knelt beside him: “What is it, wife?”. She was obviously moved and replied that she wanted to pray with him and to become a Christian herself. “Why, have you seen something?” he asked. “I just thought”, she replied, “that if the God of the Christians is as good as you, then he’d be much better than Allah or Mohammed. Now that you’re striving to be like God, I got to thinking how much better the God of the Christians is”. And, indeed, shortly afterwards she and her children became Orthodox Christians’.

When those two brothers went to Elder Païsios’ kelli for the first time, they didn’t eat the Turkish delight or drink the water the elder offered them. When he saw this, Elder Païsios asked why they weren’t eating the sweet and they answered: ‘Father, we want first to pay our respects in your chapel and then we’ll have the sweet’. Father Païsios was impressed by the behavior of the boys and said: ‘So many people come to see me, but only these two have acted like this’.

So, do you see how important and necessary the virtue of patience is and what beneficial and saving results it has? Through the prayers of Saint Païsios, may our Lord God incarnate grant to all of us this great and saving virtue.