‘Prepare yourself, Bethlehem, Eden is open to all’

God created a world that was ‘very good’ (Gen. 1, 31) with humankind as the outstanding work, the crown and pinacle of his creatures. According to the Fathers of the Church, creation wasn’t the result of any need on the part of God, who is entirely dispassionate, but in order that he could share his bliss with other beings, in particular with the immaterial angels and with human beings. The created cosmos is the supreme expression of God’s love. Humankind, in particular is the recipient of divine love, because we alone are called his children, adopted by him and therefore the fruit of a different kind of creation vis-à-vis the other creatures. 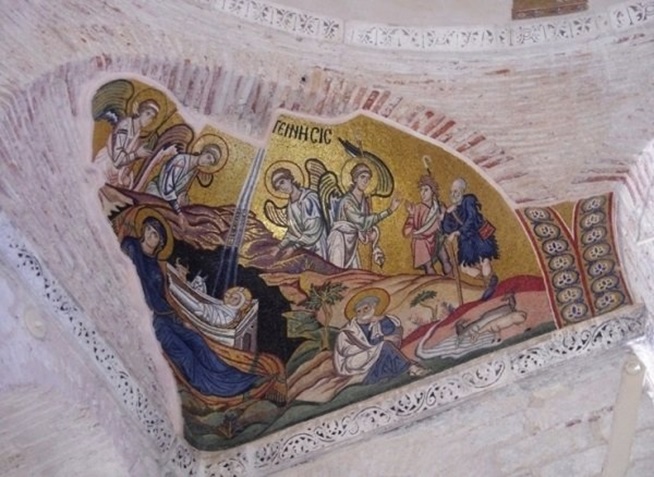 Both the angelic powers and humankind were made as free beings, that is as persons who were not merely an encapsulation of irrational and impersonal creation, but rather were called upon to ‘rationalize’ and ‘personify’ it. But our free choice to act on the side of evil and to reject God’s will and so to fall, resulted in enormous turmoil within the created world and thus we postponed the prospect of its deification. The rebellion of Lucifer and his angels, as well as our own fall, subjected not only humankind to decay but meant that all things that were made, ‘groan and travail together’ (Rom. 8, 22). ‘For all people sinned and have been deprived of God’s glory’ (Rom. 3, 23) which means that the dread and fateful event of the fall estranged us from God and deprived us of the supreme gift of communion with him. Deprived of God’s glory, fallen humankind fell into a state of utter woe and heartache, because the only source of happiness and joy is ‘the Father of lights’ (James 1, 16). The source of misery, decay and death, on the other hand is sin and the devil.

Despite our rebellion, God did not abandon his most favoured creatures. Who could save us? Certainly, he who made us in the first place, the Word of God, through whom ‘ all things were made; without him nothing that was made came into being’ (John 1, 3). The pre-eternal Divine Counsellor had decided that the Son and Word of God would execute the task of saving humankind and the world: ‘For when the Creator saw lost humankind, whom he had made with his hands, he bowed down the heavens and descended. And from the divine, pure Virgin he took on all our substance, truly becoming flesh; therefore he is glorified’ (Ode 1, 1st canon of the Feast). Saint Paul wrote that he ‘who, being in very nature God, did not consider equality with God something to be used to his own advantage;  rather, he made himself nothing by taking the very nature of a servant, being made in human likeness. And being found in appearance as a man, he humbled himself by becoming obedient to death, even death on a cross’ (Phil. 2, 6-8). After a preparation lasting many centuries ‘in the fulness of time, God sent his Son, born of a woman, born under the law, to redeem those under the law, that we might receive adoption to sonship… So you are no longer a slave, but God’s child; and since you are his child, God has made you also an heir’ (Gal. 4, 4-7). The pre-eternal Son and Word of God became flesh and dwelt among us. We have seen his glory, the glory of the only Son, who came from the Father, full of grace and truth (John 1, 14).

Infinite God became human in order to redeem us from ‘enslavement to the enemy’. ‘For he is our peace; in his flesh he has made both groups into one and has broken down the dividing wall, that is, the hostility between us.  He has abolished the law with its commandments and ordinances, that he might create in himself one new humanity in place of the two, thus making peace, and might reconcile both groups to God in one body through the cross, thus putting to death that hostility through it’ (Eph. 2, 13-16). In the person of Christ, as the incarnate Son of God, reconciliation was effected between God and us, and the disastrous consequences of the fall were eliminated.

Assumption of human nature by the Word was the only possible way for our salvation to come about, because that nature was now re-created his person as God and human. Concerning this, Saint John the Damascan says: ‘he takes the worst, our human nature, so that through and in himself he might renew the image and likeness; might teach us the conduct of a virtuous life, made more readily accessible to us through him; might, by the communion of life, deliver us from corruption, becoming himself the first-fruits of our resurrection; might renew the useless and worn vessel, calling us to the knowledge of God; might redeem us from the tyranny of the devil; and might strengthen and teach us how to overthrow the tyrant through patience and humility’. (Exact Exposition of the Orthodox Faith, 4, 4. PG 94, 1108C). Saint Athanasios the Great also stresses that: ‘He is God clad in the flesh and we are people clad in the spirit’… He who is the true Son of God by nature clothes himself in everyone, so that everyone might clothe themselves in the one God’.  Saint Gregory of Nyssa states: ‘Now he who is celestial has made us celestial also’ (PG 46, 681D). Finally, Saint Gregory the Theologian declares: ‘On the one hand, God must descend to us; on the other, we must ascend to Him, so there might be a communion between God and us, by a coalescing of our respective stations. For as long as each remains in situ, God in his glory and we in our lowliness, the goodness of God cannot mingle with us, and his lovingkindness cannot be shared…’. (Discourse on Pentecost).

So, we have with us Emmanuel, ‘which being translated is God is with us’ (Matth.2, 23). This means that from the blessed and holy day of Christ’s Nativity, God is with us ‘until the completion of the age’ (Matth. 2, 23), offering the supreme gift of redemption to all those who seek it humbly and sincerely. The total darkness of the nightmarish pre-Christian era was dissolved by the noetic Sun of Righteousness, who is the ‘true light who illumines everyone who comes into the world’ (John 1,9). Our enemy the devil has been roundly defeated and his work completely undone. It follows, then, that there is no reason for the faithful to feel any form of gloom or pessimism, because Eden has been given back to us, after we lost it. Now we have with us ‘A young child, the pre-eternal God’, who has drawn us out of the abyss of perdition and destined us to become gods by grace, sitting with him on the throne of his ineffable majesty. Glory to him!