Saint Anthimos was from Sofia, Bulgaria, where he was a married, parish-priest. In 1841, after his wife reposed, he went to Mount Athos and was tonsured as a monk at Simonopetra Monastery.

He began to act like a fool for Christ in order to hide his spirituality and closeness to God. He moved in the desert places of Mount Athos and stayed in caves and in trees. For the first five years of his hermitage he wore an old raso which later he replaced with a sack with three holes in it, for his head and arms. People would call him ‘Sacky’. 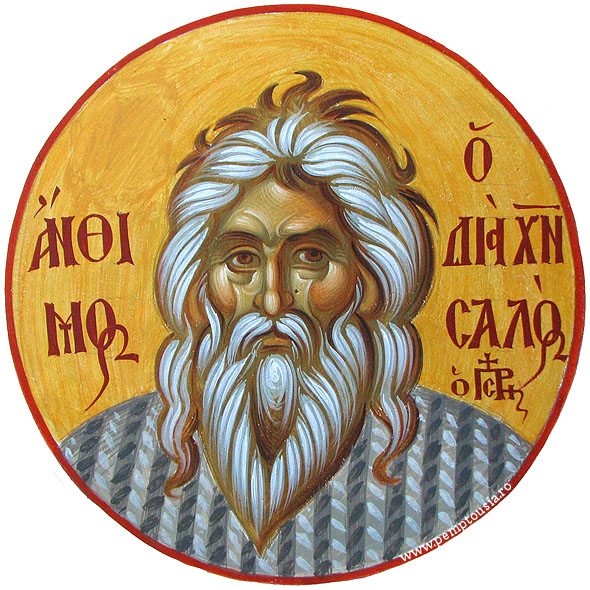 Every two or three months, Father Anthimos would visit Saint Panteleimon Monastery (the Russikon) for a few days because there he could understand the services (in Russian). He would usually hide in the narthex, but when he saw one of the fathers watching him, he would start behaving crazily.

Many called Fr Anthimos dotty, but a few realized that he had the charisma of foresight.

In his short visits at Saint Panteleimon’s, he would stay and eat with the monastery workers. When the abbot heard, he asked the monk on duty to take care of Father Anthimos. He was able to fast for many days. He once went to Saint Panteleimon, exhausted. The monk received him and prepared him something to eat, which he ate with gusto. The monk marveled that such an ascetic-looking person could eat so much, but Father Anthimos taught him not to judge and revealed that he had not eaten nothing for about seven weeks.

The same thing happened again when another young monk judged how much he ate: Father Anthimos told him that he would leave the monastery, return to his homeland and then come back to Mount Athos and become a monk, and that happened exactly.

In the winter of 1962 he got trapped by snow in a hollow tree for as long as 46 days. He later descended from the heights of the Athos and appeared at Saint Pantelimon Monastery, where he revealed that Saint John the Baptist saved his life while being trapped in snow.

In the last years of Father Anthimos’ life, he retired in a lower area, somewhere close to Zographou Monastery, where he helped with the building work, avoiding the Monastery of Saint Panteleimon where the monks were showing him too much respect.

In August 1867, Father Anthimos visited Saint Panteleimon’s for a last time and told his friend, the monk in charge of the lay-worker’s refectory – whom he confided in – that he was soon going to die.

In November of the same year, Father Anthimos fell ill at the infirmary of Zographou Monastery. Twelve days later, on December 9, he reposed.

For his prayers, Lord Jesus Christ, have mercy on us!